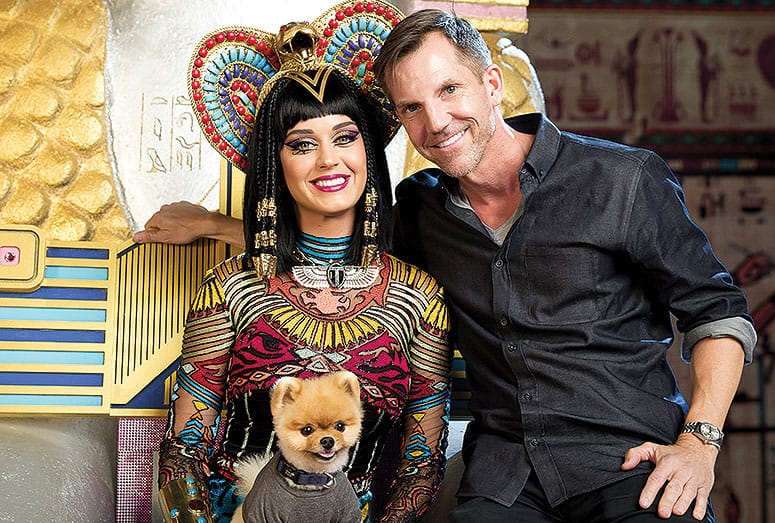 Music is his life, Los Angeles his work, and Palm Springs his heart. Katy Perry, Rod Stewart, Elton John, Jennifer Lopez, and Bruce Springsteen, among others, all have looked to one creative force for their music videos: Capitol Records’ senior vice president of creative and video production, Danny Lockwood.

Dressed in an unassuming yet stylish blue polo and jeans when he comes down from his office to the lobby at Capitol Records in Hollywood, he epitomizes casual. After a firm handshake and with a boyish smile, he gives a tour of the famous building. From the moment of his first “big break” as a legal assistant for an associate to music attorney Don Passman, Lockwood has lived a behind-the-scenes rock star life. Most recently, he earned a Grammy nomination for Best Music Video as a producer for Capital Cities’ 2013 “Safe & Sound” video.

Wanting to unwind from the bustling energy of L.A., Lockwood opted to “get the best of both worlds” in 2002 and bought his first property in Palm Springs. “ I think Palm Springs is spectacularly beautiful and one of my favorite places in the world,” Lockwood says of his deep connection with the desert. Furthering that connection, one of his best friends — his dog, Dillon — was rescued from a Desert Hot Springs shelter.

Lockwood called L.A. home until he was 6 years old, when his family moved north to Santa Barbara. After graduating from University of California, Santa Barbara, he returned to his roots in his native city. His first job was as a legal assistant at Gang, Tyre, Ramer & Brown Inc., working with an associate to Passman, who wrote All You Need to Know About the Music Business. “Working in the legal field on recording contracts gave me a great overall education on the music business,” Lockwood says.

Following Passman to Capitol Records, Lockwood began working as a legal assistant in the business affairs department in 1990. After a year and a half there, he transitioned to the video department as the assistant to three video commissioners and learned everything they knew. From there his career in video production took off.

“I commissioned my first video in 1995 for Yoko Ono, which was a benefit project for amfAR [an organization that raises funds to find a cure for HIV].” As his career flourished, he moved on to Elektra Records, and then Sony Music, before his path circled back to Capitol Records in 2008.

Drawn to music growing up, Lockwood was an instrumental musician and singer. “Madonna [was] personally and professionally inspiring to me,” he says. He now devotes his career to working with performers of that same caliber, and his passion for music fuels his work at Capitol Records. Lockwood says he loves to collaborate with artists creating music videos that complement their songs. For him, the best part of working with musicians is when he is able to help “create something visual which takes the music to another level.”

Being a visual creative force in the music industry, Lockwood wants to leave an indelible impression on music fans. “I love it when you hear a song and the first thing you may conjure up in your mind is what that artist did in their music video or album cover,” he says. “I aspire to make music videos which are iconic pieces of entertainment and help create memorable benchmarks in an artist’s career.”

Lockwood has indeed done so, having won a VMA in 2011 for Perry’s “Firework” video. He immerses himself in his projects and was working long hours to get a lock on the final edits for Perry’s next video, “Dark Horse,” while the interview for this story unfolded.

Lockwood’s passion drives him. “I still get a high from listening to popular music,” he says. Finding it “inspirational” and “motivating,” music is the force that has shaped and changed him throughout the years. “I live my life alongside pop music, and certain songs or artists have become inseparable benchmarks along with my [experiences],” he says.

Having watched the music industry change over time, Lockwood is seeing technology evolve with his profession. “What’s great about the advent of YouTube and Vevo for music videos is that it’s now viewership on demand,” Lockwood says. Giving people what they want to see most is a talent that Lockwood has in abundance: Perry’s “Roar” video is closing in on 360 million views on YouTube alone.

When not producing videos for world-famous musicians, Lockwood still gravitates toward music while relaxing in his Palm Springs home. He hikes with Dillon, entertains friends from L.A., finds new restaurants, and enjoys the nightlife. “I’m looking forward to seeing what the new Hard Rock Hotel does with its music venue and hope it becomes a new place to see bands,” he says. He also enjoys catching shows at the Annenberg Theater at the Palm Springs Art Museum as well as at the McCallum Theatre in Palm Desert.

Constantly drawn to the siren’s song, great music seems to always be in his path. A huge enthusiast of the Coachella Valley Music and Arts Festival, Lockwood has attended the event 10 years in a row. “It’s my absolute favorite thing to do all year, and I run around the Empire Polo Field like crazy trying not to miss a thing,” he says. Excited to discover new scenes, he also enjoys catching local and burgeoning bands. “I think the Tachevah block party is an incredible new music event to come to the desert.”

The answers come easily when he’s asked what he loves about the desert: “I love the dry heat, the small-town feel — and am continually in awe of the majestic San Jacinto Mountains,” Lockwood says. “I even love the dead heat of summer and find that it’s one of the only times when I truly relax.” As he speaks, he pauses to take in the mountains surrounding his desert hideaway. “I find that everything is just easier in Palm Springs.”