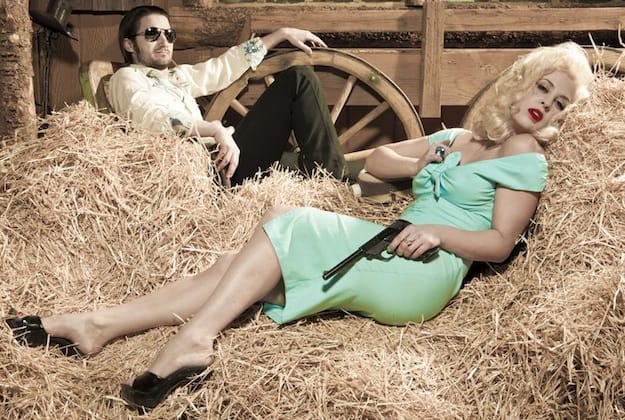 Award winning Indie music artists Gram Rabbit is staying true to its desert roots with a pair of performances this weekend.

The Joshua Tree-based rock group will play headliner to the inaugural AMFM Fest, an arts, music, documentary movie event set to run June 13-16 in Cathedral City. In addition, Gram Rabbit will play to the hometown audience at the Joshua Tree Gay Pride Festival on June 15.

Gram Rabbit will hit the stage at midnight June 14 at the AMFM Fest at the Cathedral City Town Square, and at 8:30 p.m. June 15 at the Art Queen Complex in Joshua Tree.

Gram Rabbit’s eclectic mix of indie musical style and quirky pop art presentation is led Jesika von Rabbit, Todd Rutherford, Jason Gilbert and Ethan Allen. Established in the desert 10 years ago, the band has bloomed with songs that have been used in more than 30 commercials, TV shows, and movies such as Crazy, Stupid, Love. Last year, Gram Rabbit’s single, “Desperate Heart”, was featured on both Fruit of the Loom commercials and the 2012 Summer Olympics.

Despite its commercial success, Gram Rabbit has continued to brandish a unique brand of entertainment. The group’s shows and videos often use desert scenes and incorporate “rabbit” themes giving audiences a thrill and further developing a fan-base that considers themselves, “The Royal Order of the Rabbits”.

This weekend’s performances come on the heels of the band’s new record, “Braised and Confused”. Palm Springs Life was fortunate to grab a few minutes with lead singer, Jesika Von Rabbit.

How often do you get to play locally before a “desert” hometown crowd?
“I live in Joshua Tree and it’s always great to play here. When not touring, we usually play at Pappy and Harriet’s in Pioneertown. We play for their annual Halloween Party and it’s off the wall! It’s usually sold out. We can also be seen at ‘The Hood’ in Palm Desert. We like to keep it special here.”

How has living in Joshua Tree influenced your music?
“The desert has had huge impact on our music. Our album Cultivation (2006) is desert soaked. Lyrically, we want to match the sounds of the way the desert makes you feel…magic and beauty, something otherworldly. It’s about a feeling of being connected…to ancient civilizations, maybe American Indians, old spirits and cowboys. Aliens…supernatural stuff for sure. There are strange coincidences, unexplainable things…almost a psychic awaking where your head is very clear.”

How would you define your music and how has desert living played a role?
“I moved here from Los Angeles 12 years ago and met Todd. I wanted to get away from the city and I had all these ideas. The desert is such a vast environment, but it doesn’t have a huge music scene. So you don’t feel pressured to fit into a musical genre. You don’t have to choose a style or please a certain crowd. Our music is vivid and colorful. We like to evoke a lot of emotion and evoke a lot of ‘danceability’.”

What can fans expect your band to share at AMFM Fest?
“We’ll be playing songs from our brand new EP, Braised and Confused. And we’ll have our usual onstage antics with visuals, dancers and now character additions to engage the senses. The ‘Grundelinas’ will join us for a couple of songs in matching outfits with rabbit ears. The Grundelinas are featured in our latest video Final Clap Fever, which was shot here in the desert. It’s a gorgeous ‘Fellini-esque’ style video shot by Italian director Giuseppe Asaro.”

For information and tickets for AMFM Fest, visit www.amfmfest.com