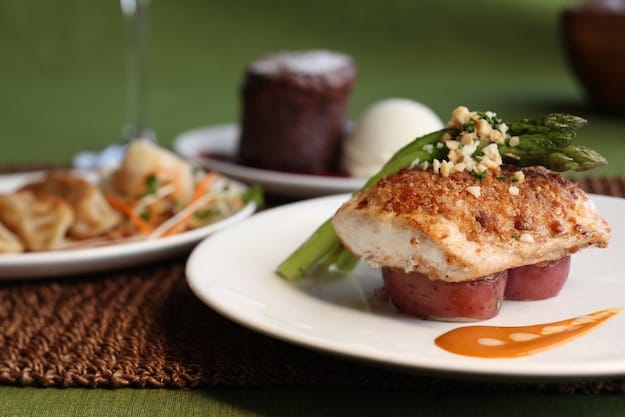 There are all many different types of fusion cuisine.

Tex-Mex is probably one that’s familiar to pretty much everyone. But equally popular are restaurants whose menus are influenced by Asian ingredients.

Roy’s in Rancho Mirage — there are 31 Roy’s locations around the world — is built upon the concept of Hawaiian fusion cuisine, which is also known as Pacific Rim cooking.

“Basically, we’re using contemporary French cooking techniques with a variety of Asian ingredients,” says Chef Partner, Kevin Land. “Hawaii is more or less a melting pot, so that’s how we play with it.”

The restaurant’s fine dining experience is combined with what they call their Aloha service.

“You come in here and it’s a warm style of service,” says Managing Partner, Kameron Luyt. “We’re your neighbor and we want to get to know you and make you a regular.”

As part of my Aloha welcome, Land and Luyt gave me with a guided tour through some of the restaurant’s fusion style dishes.

Meat lovers should check out Roy’s Kai-style beef short ribs, which are made with red wine using a classic French braising technique

“We use a little honey mustard, grill them, and spin it a little Hawaiian style with lomi lomi tomatoes, it’s like a Hawaiian pico de gallo,” says Luyt.

Since we were on a roll, literally, I asked about the fusion aspects of the traditional Japanese-style spicy ahi tuna roll.

Feeling like a fusion expert? You can take things a step further if you want. After dining at Roy’s, ask them about their next cooking class where you’ll prepare a three-course meal and then enjoy everything you’ve just cooked.