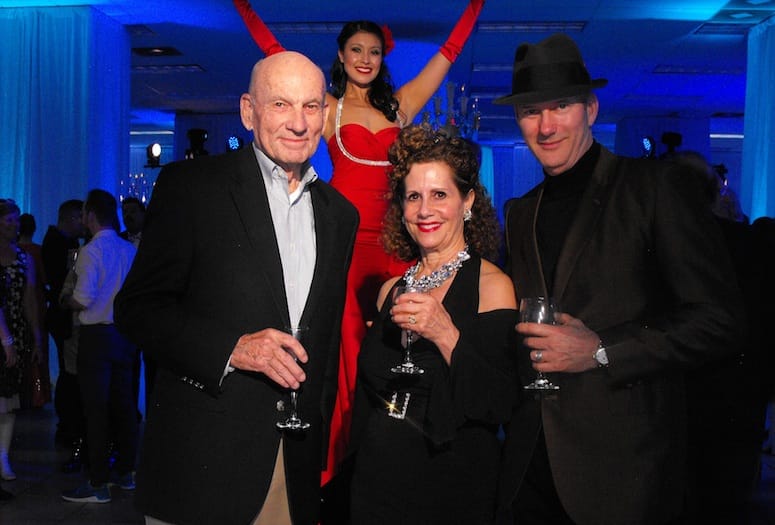 The glam affair attracted more than 400 guests to Modernism Week’s new CAMP headquarters (Community and Meeting Place) in the 1958 Class 1 Historic original Robinson’s Department Store (most recently The Alley). The scene was a page out of Hollywood’s yesteryear – lights, cameras, and lots of action. Guests arrived on a red carpet that was actually a very long train of a dress worn by Los Angeles model Musetta Rubin. Once inside guests were offered glasses of French 75 champagne cocktails, which were arranged around a metal skirt worn by Katelyn Ford, another LA model. These clever and show stopping elements were the brainchild of local event producer Frank Goldstin of Momentous Events.

The visual effect was completed by floor to ceiling chandeliers, colorful mood lighting, while the entire space was draped in white to play off the lights and bling.

“Our theme was Hollywood in Palm Springs and we wanted to recreate the midcentury modern magic that Palm Springs has always been known for,” says Goldstin.

And the music matched the mood. A large stage featured DJ Baz and Nutty, whose band played music of the era while couples swung and sashayed on the dance floor.

If this is a taste of what’s to come during Modernism Week 2016, get ready for 10 days of conviviality and fun – midcentury modern style. The masterminds behind the Modernism Show & Sale, which opens Feb. 12, from left, Gordon Merkle, Rosemary Krieger, and Charley Walter.