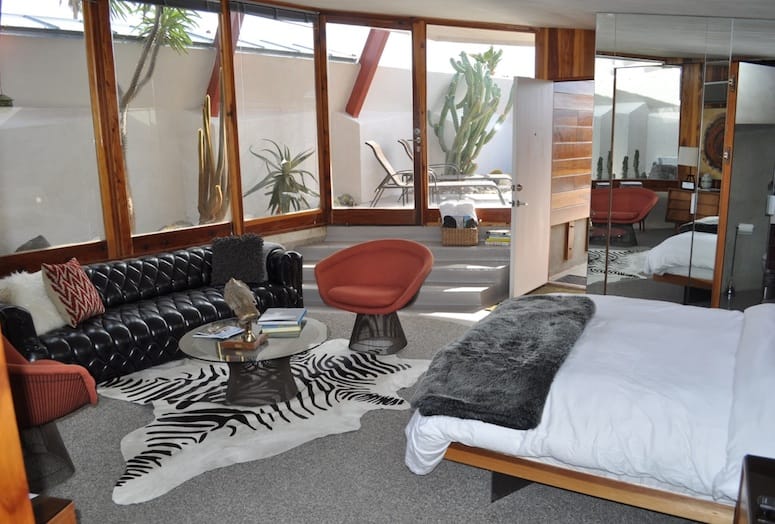 One of the great things about the Coachella Valley is how you can discover unique little architectural gems, often where you least expect to find them.

Take, for example, the Hotel Lautner in Desert Hot Springs.

A short distance off a main highway, the hotel sits at the end of a quiet residential street among a block of suburban-looking, Spanish-style homes.

But as soon as you enter its gate, you’ll time travel back to the mid-20th century.

John Lautner designed the hotel’s four units in 1947 for movie director Lucien Hubbard as prototypes for what was to eventually be a 600-acre planned community. But the project never came to pass and after being used for many years as a getaway by Hubbard’s celebrity friends, the buildings fell into disuse and sat vacant for nearly 20 years.

After several iterations and owners, the property was purchased in 2008 by interior designer Tracy Beckmann of Tracy Beckman Design and furniture designer Ryan Trowbridge of Brown + Trowbridge.

They spent more than three years carefully renovating each of the units with an eye toward remaining true to the original design.

Back to Midcentury Basics

“Lautner designed the property using four major materials — concrete, redwood, glass, and steel,” says Beckmann. “We decided to bring those elements back to the forefront by stripping them of all the paint, stucco, and layers of neglect.”

She notes that although the structure was basically intact, all of the redwood was damaged and had to replaced.

"There isn’t a square corner anywhere!” adds Trowbridge. “So in replacing each piece of wood, it was very challenging and very time consuming."

And he notes that another of their big challenges was figuring out the colors. “There are no color pictures of the original building,” he says.

However, Trowbridge adds that all the steel beams and concrete were in great shape and most of the glass is original.

Come One, Come All

You would think that with only four units it would be easy to decide which one you’ would most like to stay in. Wrong.

While each of the units has nearly the same foot print, along with its own private patio, they all have different furnishings and personality to spare.

“Unit 2 is the only one to our knowledge that Lautner detailed and has the original redwood wall penetrating from the exterior into the interior at the front door,” says Beckmann.

My personal favorite was Unit 3, the Bachelor Pad. How could you not love a room where a piece of art opens to reveal a television?

Beckmann and Trowbridge note that it’s very common for groups of friends to rent all four rooms. “Some stay in three rooms and hang out in the fourth,” says Trowbridge.

“We encourage our guests to rent out the entire compound. It’s the ultimate way to really experience and immerse yourself in what we call the Lautner Lifestyle,” adds Beckmann.