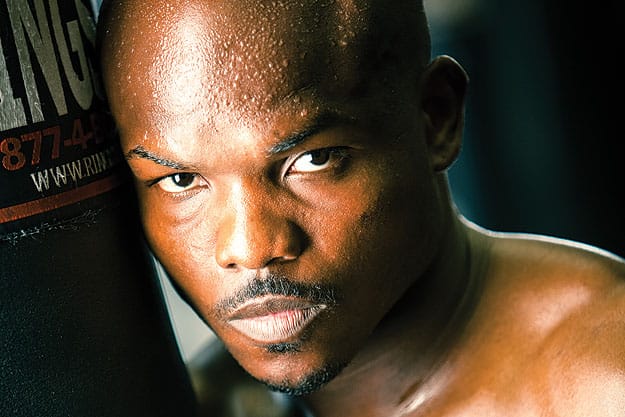 The 140-pound fighter, known as “The Desert Storm,” owns an undefeated professional record in 29 bouts. He’s preparing for a June 9 date at MGM Grand in Las Vegas, where he’ll battle 147-pound Manny Pacquiao for the world welterweight title.

A congressman and hero in his native Philippines, Pacquiao was dubbed Fighter of the Decade and Fighter of the Year for the third time by the Boxing Writers Association of America in 2010.

“The fact that Manny is considered the best — I want to be the best, man,” Bradley says. “I don’t do this just to put money on the table. I do this to be the best. I strive for excellence — period.”

“He’s willing to work, and that’s what makes him successful,” Rougely says. “He understands that success doesn’t come cheap.”

On this morning, they work on a modest slab of concrete they call “The Dungeon” — a place where sweat serves as the only decoration. The measured mass and simplicity of the tools at hand — 25-pound dumbbells, a 60-pound curling bar, and a pair of medicine balls — appear to fall short of the task at hand. Yet the results are unquestioned. With high repetitions designed to dispense energy throughout his body, Bradley has proven enhanced stamina and flexibility in his two previous fights under Rougely’s coaching. Since 2008, he follows a practice of maintaining a vegan diet for three months prior to a bout.

At 28 years old and with a 5-foot-6-inch frame, Bradley flashes a pearly smile. But behind his genuine affability burns a frightening intensity.

TIMOTHY RAY BRADLEY SR., KNOWN AS RAY, is built like a Hummer and speaks with a preacher’s inflection. In the distance, his son runs the track at Palm Springs High School as Rougely directs. He performs sprints, crossover drills, and knee lifts amid an exacting heat.

“Where he started from was a struggle — ups and downs, and nothing was ever handed to him,” Ray says of his middle child of three. “Everything he got he had to work hard for.”

Tim was 8 when he and his father began working out together. When he was 10, he talked his father into taking him to the Palm Springs Boxing Club. Ray has since worked as his son’s trainer and in his corner.

“You have to respect one another,” he says. “When he started this, I told him, ‘Anytime at the gym when I’m coaching, respect me as a coach. But once we come out of that gym, I’m your dad.’”

Ray instilled in his son that the road to success can only be driven in an unwavering, disciplined, and demanding gear. As Tim showed early promise in the ring, the training moved beyond the gym to the tramway road — among the steepest climbs in Southern California, with an average grade of 9.5 percent.

TWO MONTHS BEFORE BRADLEY’S MGM BOUT, he jumps rope in the boxing gym at the Boys & Girls Club in Indio, his eyes fixed.

His trance finds momentary pause when his wife, Monica, brings their 7-month-old daughter, Jada, ringside. Tim and Monica have known one another since attending Raymond Cree Middle School in Palm Springs and have been married since 2010.

In middle school and high school, everybody called Tim “Little Ray Ray,” Monica says. “Short and squared body, he was full of muscle — a boxer.”

The two were reacquainted in 2003 when the possibility of the seven-figure paychecks Bradley now receives seemed a distant notion. Monica was a recently divorced mother of two working at Cathedral City High School, where she was a secretary for Ray Bradley’s security department. Tim was cultivating a nascent career in the pro ranks of boxing while waiting tables at a Rancho Mirage eatery. Their courtship mirrored the quality that has made him successful in the ring: a steady, persistent focus.

“It was a long road getting here,” Monica says, her husband’s taped fists cutting through the air 10 feet away. “When Tim and I first got together, sometimes we would have $11 in our bank account. We had no business being together. And he would just tell me that a better life awaits.”

Even as recently as four years ago, when Bradley shocked the boxing world by felling Junior Witter for the World Boxing Council 140-pound title in the belt holder’s native England, Tim and Monica were living on bank loans.

“When I went into that championship fight, I was broke,” Bradley says. “Monica was holding things down for about a year, and I was doing personal training for $75 a session. Having that mentality … dude, you’re hungry to do whatever it takes to bring the bread home and win the fight. But the cool thing is that, with Monica, if we could go through that, we grew closer. We didn’t fight. We got tighter when we were going through those hard times.”

It was a family connection that brought Bradley and Rougely together in 2009 when the boxer noted the impressive results the coach had achieved training his stepson, Robert, who was 9 at the time and gaining fitness for football.

“I think Tim’s family primes him more than anything — to please them and to be a provider,” Rougely says.

“That’s the reason I fight so dang hard. That’s the reason I train so hard,” Bradley says. “When I fight, I don’t just fight for myself. I fight for everybody around me, everybody connected with me. And that’s what pushes me to win — and not go back to waiting tables for eight bucks an hour. I’m enjoying my life right now and don’t want to look back.”

A COARSE WIND BLOWS OVER Dennis Keat Soccer Park in Cathedral City. His date with Manny Pacquiao less than two months away, Bradley leads a circle of children in an off-season workout for the Cathedral City Lions All-American Youth Football and Cheer. Recognizing a void in their hometown’s youth athletics programs, Tim and Monica founded the organization in 2009. With Tim serving as league president and Monica as commissioner, they volunteer as many as 20 hours a week in season.

This is an escape for Bradley and represents a balance that he’s strived for in adult life.

“Sometimes he would come home and there was still boxing [on his mind],” Monica says. “I used to say, ‘Treat it like a job. Do your nine-to-five in boxing, then come home and let it go. Don’t lose sleep over it. Don’t involve it all the time.’ But he still does. He still loses sleep over it. Sometimes he waits until I fall asleep, then he gets up and watches boxing videos [of his own and other fights].”

“Being at the precipice of my dreams,” he says, “it’s like, ‘All right, we’re here now. What you gonna do, Bradley?’ That’s in my head. We’re here. This is the opportunity. They only come once in a lifetime. Sometimes people get second chances, third chances. I don’t believe in that. I believe in one shot. And I have to seize the moment.”

Bradley runs the circumference of the soccer park with the children. The young charges soon align for crossover drills and Bradley edges toward the rear of the line to offer encouragement to one of the smallest in the group. He kneels before the boy, his smile generous and his eyes intent.

HOW THEY MEASURE UP

FROM THE PRESS BOX

“I believe Bradley is going to give Pacquiao a tougher fight than most people think. Bradley is a young guy. He’s at his best. He’s at his peak right now. He’s confident, and he behaves like a real fighter. He’s got decent skill sets and good speed.

“I’m not saying he’s as fast as Pacquiao, but he’s not in a completely different area code. And I think Bradley has enough experience and enough versatility where he can come up with the ideas that will have to make sense for his approach in dealing with a guy like Pacquiao.

“I also think we saw a little dissipation in Pacquiao in his last fight with [Juan Manuel] Marquez. Part of that is to Marquez’s credit, in that he knew not to fight a speed fight or a physical fight where his physical attributes come up second in those categories. He timed Pacquiao and waited for him to make the first move. He didn’t get into a shootout. Hopefully, Bradley is smart enough to take a little page from that book.

“I think the timing might be good for Bradley to catch him. It’s still going to be a tough fight and he’s still going to be the underdog, but it’s funny that people wonder if Bradley is going to be big enough. People forget that Pacquiao started off at about 105 pounds and won his first title at about 110. So it’s curious that people are wondering if Pacquiao is going to be too big for a guy who has always fought at light welterweight, pretty much. I don’t think there’s going to be a problem. The bodies are the bodies, and Bradley has a body that — at its original starting point — was a bigger body than Pacquiao’s was.”