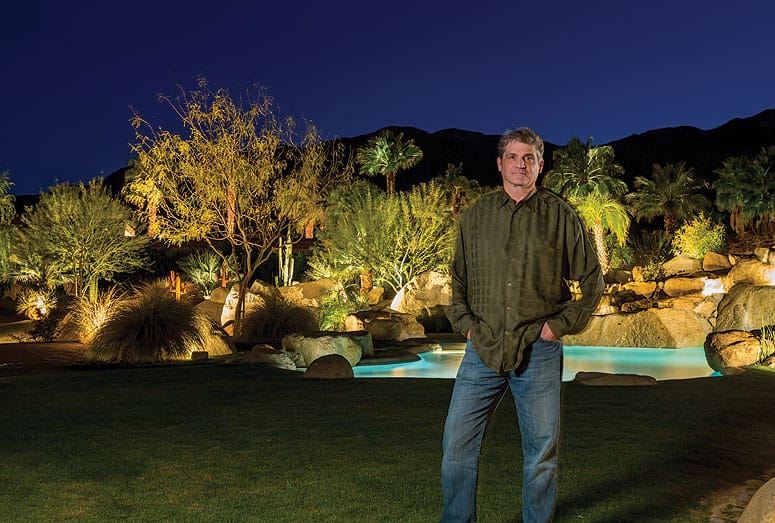 When it comes to interior design, lighting is just as important a factor as materials, colors, or any other aesthetic component of a room, says Studio Lux Founder and Principal Christopher Thompson, who has designed for iconic structures and celebrity homes in the desert and around the world, and is now partnering with architects on The Green Builder House of the Future in Orlando, Fla.

“The proper placement and balance of light is key,” Thompson says. From facilitating tasks such as cooking or working at the computer to creating the desired ambiance, “the right lighting can make all the difference.”

Q. What are the benefits of LED versus incandescent bulbs?
A. If done correctly, LEDs can work even better aesthetically than incandescent lights.  But the greatest thing — especially here in the desert, where electricity rates are so expensive — is the return on investment. The upfront cost is higher, but you’ll have a substantial reduction of power consumption, extended life (50,000-plus hours), and reduced maintenance. LEDs produce less heat, so air-conditioning doesn’t have to work as hard. We recently outfitted a 3-acre yard in Palm Springs with 400 LED light fixtures that use no more power than a hairdryer.

Q. What factors should be considered when planning lighting for a particular room?
A. You should consider what the room will be used for and how much light is recommended. In a kitchen, for example, you want high light levels for cooking and an accurate rendering of color — if you’re cooking meat, say, medium-rare, you don’t want the room’s light to impact that rendering. When food is served, the kitchen should transition to flatter the appearance of the food and table settings. My best advice: Install dimmers.

Q. What distinguishes a quality LED?
A. It’s important to understand LEDs to avoid mistakes in lighting design. Nicer designs have a layer of phosphor atop the circuit board to control light quality. These produce a warm, incandescent-like light opposed to a harsh light seen with cheaper models.

Q. What is the lighting of the future?
A. LEDs embedded with a Wi–Fi circuit — this will hugely affect the way we experience lighting. As in with Philips Hue (by Apple), you’ll be able to talk directly to a light bulb from Wi-Fi capable devices in your home, such as an iPad. You can [command] lights to turn on, off, go up, dim down, or change color. In a house I’m working on now, we’re installing LEDs in the skylight that shift color throughout the day to replicate natural light, from sunrise to sunset. You won’t need this on a sunny day in Palm Springs, but they’re great for rainy days or when the sun sets at 3:30 p.m. in the winter. In about five years from now, we won’t need an actual light fixture at all — the room will just become a source of light with the use of paper-thin LED pads.

Q. What is the strangest design request you’ve received from a client?
A. I was once asked to create a lighting constellation in a cone-shaped prayer room — in a client’s home … home aquariums … oh, this is a great one: I was working on a home in Saudi Arabia [for the Saudi Sheikh] and he wanted the driveway under-lit, from the property’s front gate to the house. Then he asked me to create a “moonrise” and “sunset” over the trees in his backyard. He lived a couple of doors down from Elton John, and they were trying to outdo each other [laughs].

Q. What inspired this career path?
A. Before I earned an engineering degree, I pursued a bachelor’s in fine arts (music), where I played the lute. I found myself sitting on stage during Shakespearean performances, staring around at theater lighting and fascinated by how it could quickly change the mood of the room or highlight parts of the stage. I began designing theatrical lighting first and eventually moved to residential.