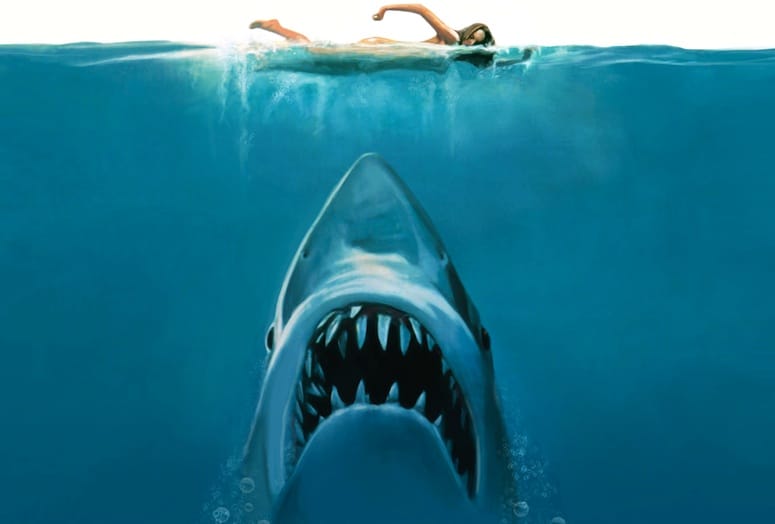 Camelot Theatres in Palm Springs will begin a new “Dinner and a Movie” Film Series, opening with the 1975 thriller, JAWS, on June 28.

“We plan to present a favorite blockbuster movie every Saturday night,” says Camelot Theatres Manager Matt Christensen. “Most of these films are available on DVD, but let’s face it. These films were made to be seen on the big screen and there’s just nothing quite like seeing them that way. Even better, they have all been digitally remastered, and feature full theatre quality sound, so the experience is going to be really magical.”

Camelot Theatres, which has the widest movie screen in the desert, will begin the revival screenings every Saturday at 9:30 p.m.

Starring Roy Scheider, Richard Dreyfuss, and Robert Shawm, and directed by Steven Spielberg, JAWS is based on Peter Benchley's novel of the same name. The film is widely regarded as the prototype of the Summer Blockbuster genre of films. It became the highest-grossing film in history at the time, and it was the most successful motion picture of all time until the release two years later of Star Wars.

Other films in the series include Caddieshack, Tootsie, The Breakfast Club, The Princess Bride, Top Gun, Raiders of the Lost Ark, Dirty Dancing, and more. Tickets are $6.50 each.

Moviegoers can start the evening before the movie with dinner and/or a cocktail at the Camelot Internationale Cafe and Bar.

“The cafe and bar will both open at 7 p.m.,” says Chef Hector Salviatore. ”Each week we will be creating a special $15 prix fix menu that has been themed to match that week’s movie. We’ll also have our regular Happy Hour menu and be offering Happy Hour pricing at the bar, plus themed specialty drinks and $6 Margaritas.