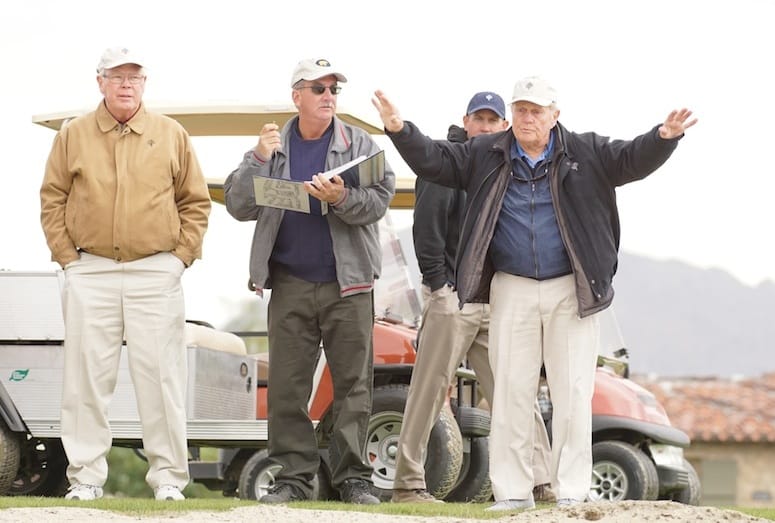 VIDEO: Listen to Jack Nicklaus talk about the state of golf today and why he liked playing shorter courses.

The Golden Bear is showing no signs of kicking up the spikes for his Golden Years.

On the penultimate day of 2014, the great Jack Nicklaus visited Toscana Country Club in Indian Wells to tour and touch-up design elements for ongoing construction of the final eight holes (Nos. 10-17) of the club's North Course.

Nicklaus' Toscana design opened in 2005 with 28 completed holes (the entirety of the South Course along with the front nine and No. 18 on the North), with the unfinished holes gone untouched until construction began anew earlier this year.

The completed North is scheduled to debut in November 2015. Evidencing the on-course canny which led him to a record 18 major championships, the 74-year-old Nicklaus rode hole-to-hole for more than three hours on the 45-degree day, making design notes, tweaks, observations, etchings and self-effacing remarks of a design vision he crafted over a decade prior.

Post-tour, Nicklaus made time for a fireside chat (yes, really, beside the hearth) with the media. Concluding a 2014 that saw the Golden Bear learn that he would soon be bestowed a Congressional Gold Medal just days before being named "Architect of the Year" by Golf Magazine, Nicklaus discussed, among a myriad of topics, his work at Toscana, his impressions on modern golf course design and his fondness for working with Bone. . . . his Toscana North Course tour and work from the day
"I changed a few holes today. There were a couple of holes from what we had on paper that I didn’t like how they turned out on the ground, so I changed them a little bit. And we had a couple of issues: The 16th green was sitting up a little high and the lots behind it had a view over the 17th tee, so you couldn't really see the 16th green, which is on the water. So we had to fiddle around, change it, drop the green and move the 17 tees."

. . . revisiting a design created more than 10 years ago
"I've actually done one in Japan right now; it's close to the same, about seven or eight years . . . we did all the rough work and the rough shaping on (the) course in Chiba, and now we're back finishing that one up. I've got one in Switzerland that we did the first 10 holes, probably close to 30 years ago and we still haven't got permission to cut the trees on the back nine yet." . . . his own changes in course design philosophies
"The equipment changes them, the equipment and what the golf ball has done and how you have to design for venues who have to worry about taking a driver out of somebody's hands. If you want to do a golf course today, if you want to do a golf course that the average golfer can play, enjoy it, and it doesn't have to be 7,700 yards, you've got to take the driver out of the good player's hands, otherwise the average-good player can't play, can't compete. You start saying, 'I've got to build a golf course at 7,700 yards and every par-4 is 475, 480 yards,' all of a sudden, nobody ever heard of Gary Player or Ben Hogan or Fred Funk or Curtis Strange.  The point of it is: They were all very, very good players, so design today, you've got to take the philosophies, 'How do I make a golf course today so that Gary Player would've been competitive when he was playing, and compete against Bubba Watson.' So how do you do that? We didn’t have to used to do that and worry about it."

. . . amateur players relating to modern-day professionals
"That is a problem with the game, I think. The average golfer always wants to relate to the pro; and I don't think the average golfer can relate to the pro today. Heck, how can you relate to somebody who hits it 330 yards, 340 yards? The neat part of when we were playing, is I could go out, open up Toscana – not this course, but let's say 20 years ago – I could play with the club champion, because he knew the golf course, could beat me if he played well . . . I always thought that was the neat part about the game, the average golfer and the pros were pretty close and playing the same game."

. . . working with Bill Bone
"Bill Bone is . . . I've never dealt with somebody who is so detail-oriented. He is so good at what he does. I love working with Bill . . . every little thing he sees, he wants to do it better, wants to make it right. He doesn't try to do something that's Taj Mahal, he doesn’t try to price you out of the world. Good value for the player, you don’t have to be a multi-billionaire to play here."