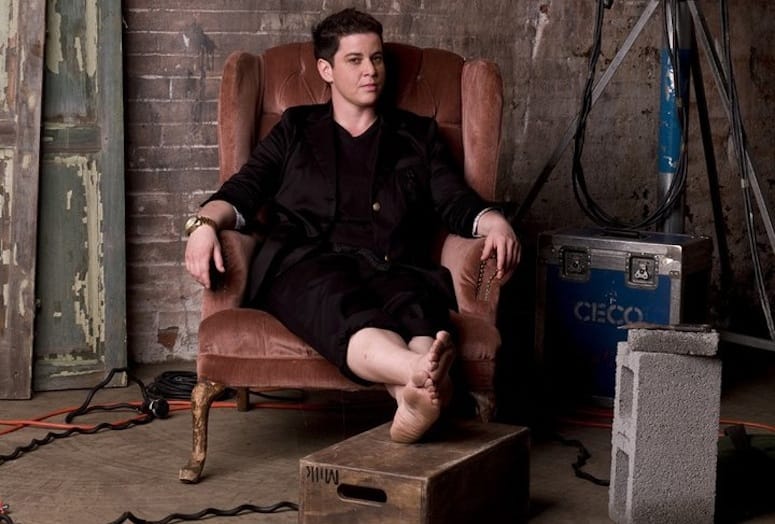 She’s a lady. And a gentleman.

It’s a distinction that, sometimes, confuses folks. Her personal presentation can be considered stereotypically more masculine and you might hear the puzzled comments: ‘Is it a guy or a girl? Can’t tell.’

Lesbian comedian Julie Goldman doesn’t care. She is happy being herself.

“I came up with ‘Lady Gentleman’ for my live stand up show,” Goldman says. “That’s how I see myself. My whole thing is I love being a woman, but I am a masculine lady. I have co-opt both genders.”

Goldman has starred in numerous shows including Butch in the City, The Big Gay Sketch Show, and The New Normal. Currently, she pairs with Brandy Howard (at right) in Julie & Brandy in Your Box Office on Bravo at 10 p.m. Tuesdays.

In addition to her work as an actress and stand-up, Goldman is also a musician, often playing the guitar at her gigs in what she characterizes as lesbian folk rock parody.

Goldman will bring her guitar and her comedic skills to the sixth annual Joshua Tree Gay Pride Festival, “It’s Getting Better!”, on June 14. This year’s theme is a take on the national campaign, “It Gets Better Project,” that helps LBGT youth against bullying.

“We still have LGBT bullying in our local schools,” says event producer Andy Woods, “and it’s important to acknowledge that while it is getting better, there is more to do.”

The festival features a stage with live entertainment, DJs, musicians, artists, local eateries, games for kids, a beer garden and activities for the entire family.

This will be Goldman’s first time to Joshua Tree, and she’ll bring her writing partner, ready to explore and hang out.

“I think the point (of Pride) is to be yourself, be free, be aware and be informed,” she says. “I’m Jewish so I question everything. Question, question, question…everything is up for conversation.”

Inspired by the likes of Mel Brooks, Joan Rivers and Gilda Radner, who she refers to as “The Queen”, Goldman’s future aspirations seem pretty clear.

“It is my opinion and belief that, until hell freezes over, and even then, Saturday Night Live will never, ever, ever, ever, have a butch dike,” she says. “ My goal would be to help create and write a sitcom or comedy series that has a likeable, funny, butch lesbian comedy character. Someone your pals with…. I would also like to have the career that Seth Rogan and Jonah Hill have…making movies, producing, writing, and doing a bit of everything. I don’t care about SNL anymore! I want to create stories that have female and gay characters in comedy.”