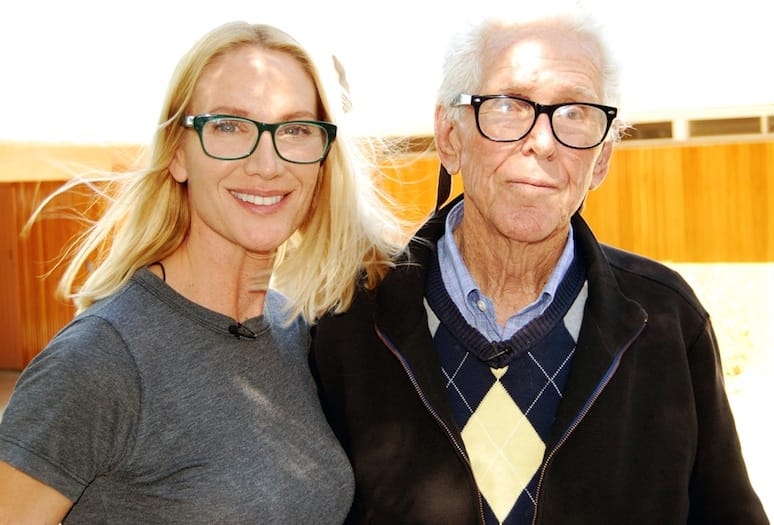 Actress-preservationist Kelly Lynch had a chance to meet and get to know Richard Olyer. "We even looked alike," she says.
Photos Courtesy of Kelly Lynch/Rebecca Gonzalez Mid Century Modern Remodel

Midcentury architecture has its roots in the 1940s, but it’s only now 70 years later that we understand it, contends actress and preservationist Kelly Lynch.

“As Americans, it’s always been more is more,” says Lynch, whose most recent role was Meg Bannock on the Starz TV series, Magic City created by her husband, Mitch Glazer. She may be best known for Roadhouse with Patrick Swayze and a five-year stint on the Showtime series, The L Word.

“It’s always been bigger, faster, better, we’ll tear down the old ‘50s diner and build a fake ‘50s diner,” she continues. “(Architect Richard) Neutra was really looking at sustainable living and housing. Now we’re very aware of what he was trying to do and we’re all trying to do it. We’re grateful for what we have left, and not be foolhardy with the materials we have left.”

Lynch has become somewhat of an expert. Since 1992, she and Glazer have owned and restored Neutra’s acclaimed Oyler House he built in Lone Pine, Calif., in addition to a John Lautner designed house in Los Angeles bought in 1998.

The former is the subject of a documentary, “The Oyler House: Richard Neutra’s Desert Retreat”, which will be shown at 3 p.m. today (Feb. 18) as part of the Modernism Week programming in Palm Springs. The documentary retells the unlikely pairing of Richard Oyler, a working class government employee who wrote a letter in 1959 to the famous Neutra asking him to design a house for a piece of property he had bought. Neutra, who died in 1970, is largely credited with developing the indoor-outdoor design.

Neutra fell in love with the Lone Pine setting and agreed to design the Oyler House, and the friendship forged between the two men would last for a lifetime.

Lynch was fortunate enough to meet Oyler during the filming. He was brought to the house in July 2012 and died nine weeks later.

“We had a lot of common,” Lynch says. “We even looked alike. He felt like an old friend. We connected immediately. It was fun to get to know each other. I think he was glad I had the place, and that it’s there for his family to enjoy when they want to. He gave me such a beautiful place for my family, so we share that.”

Lynch, who will attend the screening and participate in a Q&A afterward along with director Mike Dorsey (Oyler’s step-grandson), answered a few questions from Palm Springs Life.

How did you find out about the house?
“My husband and I became aware of the house through Crosby Doe, realtor extraordinaire. We had this amazing journey looking at all of these places, and we realized we were interested in Neutra. ‘I have one in Lone Pine, Crosby said, ‘just take a drive out there’. So you drive through the Mohave Desert, it’s about a three hours northeast of LA. I remember we packed copious bottles of water. I didn’t know what crossing the desert would be like. By the time we got to the house, our hearts were beating. This is spectacular. We were aware Lone Pine is where all the old westerns ("Hop-a-long Cassidy", the original "Lone Ranger" to Steve McQueen's "Nevada Smith") and many movies (Cary Grant's "Gunga Din" to "Star Trek" and the first "Iron Man") had been made. You understand why they were shot there because the topography is so exciting. So, by the time when we turned onto Thundercloud Lane where the house is, we had already decided to buy it.” Where does your appreciation for architecture come from?
“It came very early on as a kid. I had a friend whose father, Bruce Abramson, studied with architects from The Bauhaus, and he worked with a lot of interesting architects, including Ralph Rapson who were designing the Guthrie Theater in Minneapolis. That girl, Annie Abramson, became my best childhood friend. I loved their house. It was a steel and glass house, which my family hated and I just adored. It blew my mind as soon as I walked in there. Mr. Abramson had all of these amazing books of photography of architectural homes. I would just pile through them.

“I remember wondering who is this incredible architect, Julius Shulman, who had built all of these houses. I realized a little later it was the great photographer Julius Shulman. I give Julius credit for exposing me to midcentury architecture. When I saw his work, I felt this was the way to live. My family all thought I would end up an architect.”

Do you have a favorite part of The Olyer House?
“Yeah, I do. In the living room I love looking out through these giant walls of glass at the two 95-foot rocks that are quite a bit far away. It’s an absolutely beautiful place to sit, watching the sun go down with a martini or glass of rosé, the pink sky coming up, and then what appears to be a billion stars. There is no industry in that county, so it’s very, very dark and the stars are very bright. It’s spectacular.”

How do you explain the friendship that developed between Oyler and Neutra?
“Richard Olyer was such a humble man. To the day he died, Oyler didn’t understand why he became good friends with Neutra. As you watch the film, you understand their friendship. Mr. Oyler was an exceptional person; an intellectual, creative guy in his own way. Funny, loving everything you would want a friend to be. So it’s very moving.”

I recently spoke with a Palm Springs architect (Jim Cioffi) who said the people who buy midcentury houses match its minimalist characteristic in the way they live, and the simplicity of the house allows them to focus more on living. Would you agree?
“I’m an actor because I like to live in the moment. I’m not that interested in the past. I love to know about it, reflect on it and it does inform my decisions. The future is something to have good intentions about, have dreams, goals and ideas about, but neither exists. They are either over or will never be. The present is an incredibly powerful place to live.”