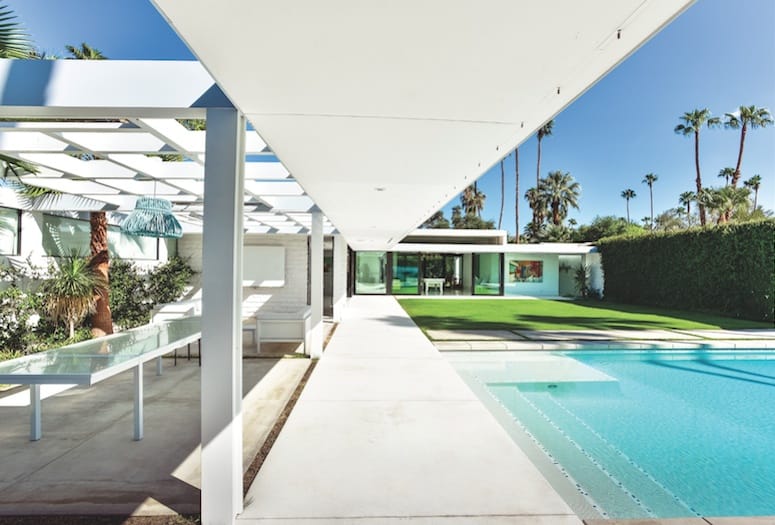 The renewal of this 1963  William Krisel home  was more sensitive to the outdoor spaces than  the preceding alterations.
Photography by Michael Utterback

This is the tale of a significant midcentury modern house that had faded into obscurity, was rediscovered, and then found new life in the hands of dedicated owners and their architect.

Modernist architect William Krisel, whose designs shaped so many midcentury Palm Springs’ tract residential neighborhoods, hadn’t known what happened to the plans for a custom house he had drawn up in the early 1960s for William Kemp, his client and partner in the landmark Sandpiper condominium project. It took the sharp eyes of two of Krisel’s friends to spot the signature marks of the modernist master in a house half-strangled by plants and in such disrepair that they regularly passed by it unaware on their walks through the Palm Desert neighborhood.

Palm Springs Life reported the discovery in its February 2012 issue. Krisel, after researching his archives, was able to confirm that the design indeed was his. The Kemps had built the home in 1963, but after a succession of six owners, it needed serious restoration. The “lost Krisel,” as it has come to be known, had been found. And it was on the market. What was dark, dingy, and overgrown became light, airy, and welcoming.

About the time of the article’s publication, Jill Lyall was driving through the neighborhood to meet her real estate agent. She and her husband, David, who live in Vancouver, British Columbia, had been looking to buy a desert home. The Lyalls wanted a midcentury modern house in the Palm Desert area. “I had seen so many of them that had been renovated and not to my liking,” Lyall notes. Then she saw the For Sale sign in front of the Kemp house.

As Lyall walked through the expansive, U-shaped house, she was impressed, she says, by “the bones of the home, and the whole layout,” even though she acknowledges that “it was a dump.” Then she spotted copies of the Palm Springs Life story on the dining table. “I knew that someone was going to snag it if they saw this article,” Lyall says. “I called David and said, ‘I have a feeling about this ….” She quickly flew down architect friend Robert Lemon from Vancouver to take a look. “He said, ‘You have to buy this,’” Lyall recounts.

For the renovation of the three-bedroom, 2 1/2-bath house, the Lyalls enlisted local architect Sean Lockyer, who served also as the general contractor and the landscape designer . The architect also served as the landscape designer.

The Lyalls, who have three grown children, were straightforward with their requirements. “We wanted it very private, and very bright,” she explains. “We live in rainy Vancouver, so no gray tones or brown, just bright white and the blues of pool and sky.”

For Lockyer, who met Krisel years earlier when he was asked to draft plans for several new constructions based on the original Alexander homes, taking on the Kemp house was a challenge. “We’ve worked on a lot of Krisel homes in Palm Springs, typically the Alexander homes, not a custom home like this,” he explains. He went to the Getty museum in Los Angeles, which houses Krisel’s archives, to research the house and its construction plans. “We were able to see what the original design was, which helped us peel back some of the layers that had been added on over the years,” Lockyer says. “We wanted to get it right.” Changes had taken place over the course of many ownerships. “It had become dark, overgrown, dingy; a lot of windows had been covered up,” Lockyer says.

Negligence had left eaves sagging and warping, and much of the wood had rotted. Significantly, a “critical design element” — a vertical and horizontal slat trellis that outlined the patio area off the living room, as well as a matching horizontal trellis over the band of kitchen windows — had rotted completely through. Likewise, the wood columns that supported the outdoor entertaining area needed to be replaced. All were rebuilt “exactly to Krisel’s specifications on the construction plans,” Lockyer says.

Lockyer addressed the owners’ desires for, he says, “a more open plan, and something more connected to the yard and landscape.” He opened up even more of the walls to the backyard, installing massive floor-to-ceiling, telescoping glass doors in the living room and down the long hallway leading to the bedroom wing. In the master bedroom, Lockyer removed masonry walls to install sliding glass walls that meet at the corner, so half of the room opens fully to the outdoors. He gave each of the two guest bedrooms an individual bathroom in lieu of the original shared bath. And he brought in additional light to all of the bathrooms through a series of skylights.

Practicalities included redoing and insulating the roof, installing insulated glass, laying radiant floor heating under new poured terrazzo flooring throughout the house, and creating a pool shower room inside a back door.  Lockyer doubled the size of the kitchen, creating an island and counters of bright Calacatta marble and cabinetry of strongly patterned figured Claro Walnut. He also bumped out a wall in the living room by 4 feet, adding about 200 square feet to the total square footage where once there was an exterior breezeway. In the new space, Lockyer installed a wall-length pass-through bar, of the same Claro Walnut, with a serving window that opens to an outside patio.

Once open to the street, the house was fronted by low pony walls establishing mini-patios outside each of the street-front rooms. But the Lyalls wanted the property walled for privacy. Drawing inspiration from Krisel’s signature concrete block walls on the original renderings, Lockyer created expanses of pierced concrete blocks, breaking it up in places “where it would have looked a little too forced.” He removed the pony walls, and now the rooms open to garden. One element Lockyer is particularly pleased with is the above-ground, infinity-edge spa cloaked in the same poured terrazzo as the house flooring. Krisel had specified a water feature that never had been built, and “we wanted to build that somewhere,” Lockyer says.

As Krisel so expertly designed, and Lockyer reinforced, the structure embraces the lawn, lounge, and pool area and delivers exactly the relaxed desert lifestyle the Lyalls sought.

“On a beautiful day, I’m sitting in the funky, round, polka-dot chair with my coffee,” says Lyall of her glass-walled living room. “I have all the doors wide open, and I can spin around and look at it all.”