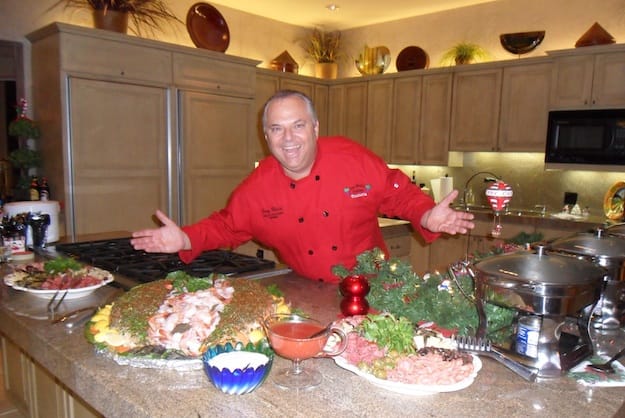 At La Bella Cucina Trattoria in Palm Desert, they really do take homemade to new heights.

“I make fresh bread and pizza dough every day and do everything in house,” says chef and owner, Tony Riccio.

“Everything I make is from scratch — all of my dressings and all of my sauces,” he adds. “When it comes to Italian food, sauces are key and that’s what we focus on. And we cure our own olives and do cured olive oils for the tables.”

The bolognese and vodka sauces are two of the restaurant’s most popular, and every pasta dish comes with your choice of penne, rigatoni, spaghettini, linguini, or angel hair.

“All of our recipes come from family,” says Riccio.

And those recipes have a rich heritage. Riccio’s family is from Benevento outside of Naples — his father was born in Italy and later moved to New York City — and his wife Elena’s family is from Taranto in the southern part of the country.

Although Riccio was born in the Bronx, his family moved to Palm Springs in 1976. He started his culinary apprenticeship under his uncle Tony Riccio and worked at Riccio’s in North Palm Springs. He opened La Bella Cucina in 1995.

In addition to the restaurant’s extensive menu, there’s a deli case up front where you can purchase antipastos, meats, and cheeses, and Riccio also does catering.

On the radar for many diners is La Bella Cucina’s salads. There’s the ever-popular Caesar, but Riccio says a lot of people also order the Mediterranean Insalata — baby greens with chopped red onions, olives, cucumbers, tomato, and feta cheese — and his traditional antipasto platter brimming with meats and cheeses from the deli case.

And if you’re in the mood for seafood, you’ve come to the right place. Riccio says one of their most requested dishes is the Pescatori, which has fresh baby clams, black mussels, shrimp, calamari and a piece of fish, all sautéed in their natural juices and marinara sauce.

“It’s more of a brothy sauce, more bouillabaisse style than a chunky tomato one,” says Riccio.

The restaurant also has a number of gluten-free pastas, including organic rigatoni and penne from Italy.

“Basically,” says Riccio, “we have something for everybody.”

That way they can keep everyone happy while also keeping things straightforward and simple.