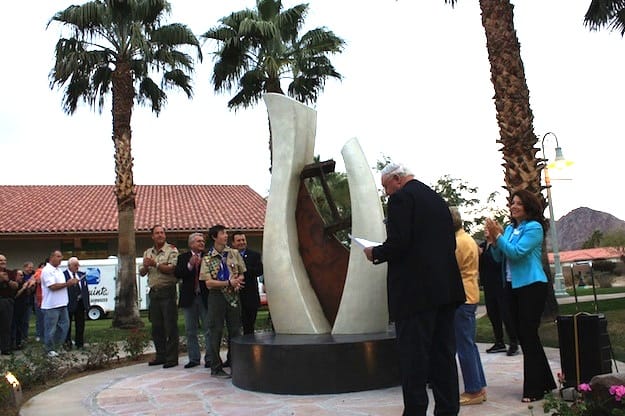 Through the delays. Through the price increases that threatened to undo his Eagle project of bringing a 9-11 memorial to his hometown over the past two years.

During a fund-raiser at Red Robin, a couple approached Andrew in tears. The 18-year-old learned the couple lost their daughter during the World Trade Center attacks.

“They were a huge reason why I kept going with this,” Andrew said. “I’ll never forget (their story).”

After watching his son stay steadfast in his quest, Andrew’s father, Mike, was proud to see the day arrive.

“It’s hard to believe this day is here, that we’re able to do this and dedicate it to the community,” Mike Davis said.

Nearly 200 people attended Wednesday’s dedication, which doubled as Andrew’s Eagle Scout ceremony. The teen decided to take on the Sept. 11 memorial project as his service project to become an Eagle Scout.

The idea of a Sept. 11 memorial hit close to home for Andrew and his family. In 2001, Mike was in New York City on Sept. 10 working at the U.S. Open tennis tournament. Mike planned to stay another day to catch a play that night and visit the New York Stock Exchange on Sept. 11.

At the last minute, Mike decided to catch a redeye flight back to California instead.

“Even though Andrew was 6, he knew it affected our family,” Mike said.

The older Davis returned to New York City to volunteer at a subsequent U.S. Open, where he heard of a Boy Scout spearheading a similar memorial project.

He pitched the idea to his son, who embraced the idea as a way to memorialize the event for generations to come.

But because the Port Authority of New York would only release pieces of steel from Ground Zero to cities and counties, Andrew had to appeal to the La Quinta City Council.

From the beginning, Andrew said, the council supported his project.

“He wanted to do something in our city that would bring the reality of what happened to us so we would never forget,” La Quinta Mayor Don Adolph said. “We said, ‘Let’s do it.’”

In June 2011, the Port Authority approved La Quinta’s request for a piece of Ground Zero steel.

Robert Radi, who owns Radi Design, decided to become involved when he heard Andrew speak at a city council meeting. Radi’s fraternity brother, Thomas E. Bernett Jr., was one of four passengers who tried to regain control of Flight 93 during the Sept. 11 attacks.

Radi designed the memorial and paid to have the steel shipped to the desert.

Originally, Andrew estimated the entire project to cost around $20,000 and take a few months to complete. In the end, it became a $100,000 project spanning more than two years.

Andrew raised $14,000 by selling T-shirts, hosting fundraisers and asking for donations outside of stores. The city appropriated $33,000 to Davis’ project from the Arts in Public Places fund, and Andrew presented Mayor Adolph with a check for an additional $1,564.92 during the ceremony.

“Now, we can hope to balance our budget,” Mayor Adolph joked.