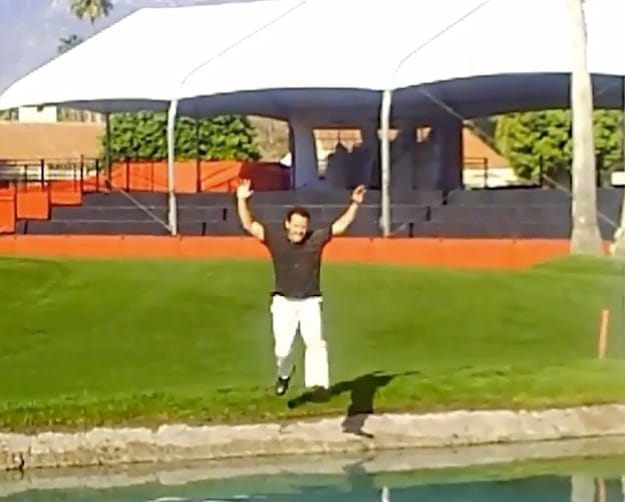 Rare is the occasion for a group to arrive upon the 18th green of the Dinah Shore Course at Mission Hills Country Club in Rancho Mirage with nary a player asking the question:

"Are you gonna jump in?"

Thanks to the folks at the Kraft Nabisco Championship and Mission Hills, I was recently able to translate that typically rhetorical query into a personal experience.

The Kraft is soon to make its 42nd annual appearance in the desert (April 1-7), and along with the anticipation for golf's first major of the season comes one of the most recognizable and cherished traditions in all of sport: The victor's leap into "Poppie's Pond".

"Most times when I tell people who I work for their reaction is, 'Is that the one where they jump in the water?'," said Gabe Codding, the Kraft's tournament director since 2009.  "From a fan perspective, every time you see a highlight of this event — and because it’s the first major of the year — you'll see the highlight of the winner jumping into the Pond."

With a tradition that began spontaneously in 1988 by winner Amy Alcott, this year marks the 25th anniversary of leapers. An employee of the tournament since 1996, Codding has spent half his life with the event, observing varied versions of the winner's splash into golf history.

"From a player perspective: Any player that's 40 or younger, all they've known from junior golf on is, 'I want to jump in that water,'" Codding said. "You talk to any of these players and the pinnacle of their career is jumping into the Pond."

"I think Lorena Ochoa's jump in 2008 is really memorable," Codding recalled.  "She's so beloved here. She would go down to the maintenance yard, have breakfast with the guys, sign autographs for every single person here. She had such a significant lead the year she won, a lot of the maintenance guys were in Mariachi bands and asked if they could celebrate. I thought, 'What a killer idea.' So we had the band staged and said, 'If she wins – great.'

“It was such a cool thing,” he continued. “Lorena and some of her family members jumped in initially and then people just came out of the woodwork to where it was maybe 30 people jumping in – there were even people from the crowd, I think.  Security was going nuts, the band was playing and there were 30 people in the Pond hoisting Lorena up on their shoulders. And especially with our Spanish and Mexican population here, it was so cool just to see the crowd go nuts."

Of course, spontaneity is aberrant in golf and "going nuts" is the type of emoting typically reserved for contact sports.

"We're taught from an early age that golf is a gentleman's or gentlewoman's game, and it's frowned upon to show the raw emotion that you're feeling," said Codding.

Golf is a sport of intensified concentration, of tunnel vision, of balancing high and lows with the recognition that the ensuing hole will present further affront to one's focus and poise.
All of which makes the Leap so meaningful.

The tradition isn't merely an opportunity for thousands of live spectators to gauge the merits of the winner's splashing style (though it is that as well), rather it's a rare moment for the victor to show something of herself, a release of all the tension and grinding that accompanies the path of actually claiming a major championship. When the winner breaks the waters of "Poppie's Pond", she is also breaking the barrier between herself and the fan.

And it is invigorating.

Personally, being allowed to make the Leap (see the accompanying video) was to experience, if for a moment, what is must feel like to make a ripple in history; all the work, all the prep, all the time. . . and then, 5,000 people chanting your name, you're but a child again.

It's as simple as running, and jumping, and smiling.

And to hold your breath underwater for a silent moment as homage to all you've invested personally, realizing that when you crest those waters you emerge at the apex of your craft and rise without peer.

I ran, I leaped, I ascended, I toweled. And upon turning back to the Pond I did see the ripples.

For a moment in time you're the best in the world at something.

And who wouldn’t want to drink that in?