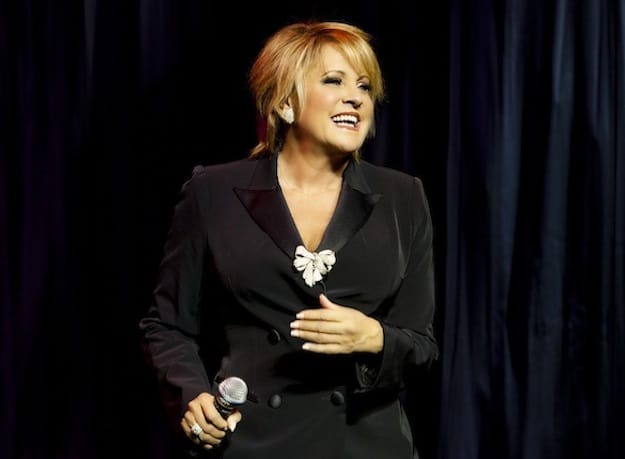 Lorna Luft is making her first appearance in The Fabulous Palm Springs Follies, and will be part of the show through the end of December.

The first guest star during the 22nd season of the Follies, Luft has long been sought to grace the stage at the Historic Plaza Theatre after she made a permanent move to the Coachella Valley in recent years.

The daughter of the legendary Judy Garland and Sid Luft, and the half-sister of Liza Minelli, Lorna Luft has created an act very much her own. She has written a book about her life, "Me and My Shadows", which became a TV mini-series that won five Emmy awards. Her set at the "Follies" includes songs from her 2007 CD, "Songs My Mother Taught Me", that was produced by her husband, Colin Freeman, and Palm Springs' own Barry Manilow.

She recently sat down with Palm Springs Life.com to talk about her time with "Follies".

Why did you choose to do the “Follies this year? Had you been approached before?
"I had been approached before. I was never available. I had been doing the show “White Christmas” for the last six years either in the United Kingdom or New York. I was available this year. I thought, ‘How cool would it be to stay home for the holidays and do a show in your own backyard’."

Is the Coachella Valley your full-time home now?
"Yes, this is my full-time home. I spend a lot of time in New York. I really love both places. I love that I can come here and it’s more of a mellow and different energy. I do love the excitement of New York. I always say when I get back to New York, I need to see a murder, a mugging and a Broadway show. Preferably in one night."

Why did you include the song, “The Man Who Got Away” during your set in Follies?
"It’s such a telling song. It’s one of those songs that works outside of a movie (in this case, the song is from "A Star is Born" starring Garland and James Mason). A lot of songs if you take it outside the movie, people sometimes think, 'It’s great, but I don’t get it’. This song was not the end of the movie. It was in the film. It was one of those songs that stands alone as a legendary song. It’s identified because it was written for my Mom. I just think it’s one of the great songs of all-time."

It’s easy for people to compare your voice to your mother’s. How do you go about the process of developing your own voice?
"I don’t think I sound like her… at all. Now people do. But then again, I think people want that because they adored her so much. I think if I came out and I had the baritone voice, I don’t know whom I could say that they would come up to me and say, ‘You sound just like her’. They want the comparison. I don’t personally hear the comparison because I sing for myself. I also have studied over the years, and I still do. As with any musical instrument, you have to keep it in shape, you have to know what you’re doing. You always have to go in for a tune-up for your technique. I think that is the wonderful thing about this business is the fact that you can never stop learning."

How do you define success?
"When the check clears. OK? There is no definition of success. You define success within yourself. If you are a successful human being and you like yourself, then you are a success. It doesn’t matter what you do for other people as far as this industry goes. If you are successful within your heart as a person, then you are successful to other people."

What is your motivation now in performing?
"Rent. I’m just like everybody else. I have bills to pay. Why do you want to go out to work? Why do you want to do that? I love what I do. I am another working person in the United States. Just because we’re in show business, it doesn’t mean it’s any less of a job… It’s the same as anyone else, it’s just maybe a shorter period of time. We get paid. That’s what motivates everybody in this economic time. It’s frightening out there. There are a lot of actors who can’t get a job. I wake up grateful every day."

What do you like about "Follies"?
"The one thing that I find about the "Follies" is that it’s inspirational. These men and women in the show. They have done Broadway shows that are iconic and legendary. I love to hear their stories. They are an inspiration not only to the audiences, but also to me. They have been able to perform in shows that all I can do is play the CD. They can tell me all the backstage dish, and what really happened. It’s an inspiration to see them do a show seven days a week."

Watch the video below of Lorna performing, chatting about Follies and her career.