Lou Cutell Held Off Writing Until Late in Comedic Career 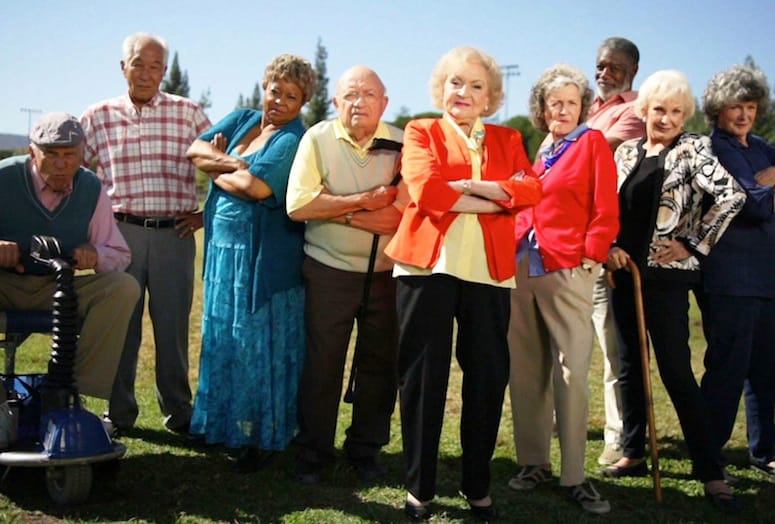 He struggled with his English, often stuttering, and became extremely self-conscious of his language skills as the family relocated to the West Coast.

“I thought my English was the worst,” Cutell recalls. “In fact, when I went to college at UCLA (in the same class as James Dean and Carol Burnett), I became an English teacher. All of my life, I thought my English wasn’t good enough. Although I’ve always loved and known I would be in show business, I didn’t start writing until my 70’s because I was afraid.”

Cutell has penned two plays, The Sicilian Bachelor and Viagra Falls, and both have received stellar reviews. In fact, Viagra Falls debuted in the Coachella Valley to standing ovations and went on to be the longest running series second to The Palm Springs Follies. The play eventually went on tour and there is talk that it will go to back to New York for another run.

Not bad for a self-proclaimed reluctant writer. “People should get out there,” Cutell says. “Don’t be afraid to follow your dreams. If nothing else, fake it til’ you make it. Really just throw caution to the wind. It doesn’t matter if you are a winner or not – you’ll never know what’s going to happen unless you do it.”

Cutell will be honored during the Coachella Valley Improv/Comedy Festival, July 11-13, at the Indio Performing Arts Center (IPAC). Sponsored by the City of Indio, this inaugural event has attracted more than 60 performers from all over the country to perform and conduct workshops.

“We are honoring Lou because, like most character actors, he has a face that many people will recognize, even though we may not recognize his name,” says Jeanette Knight, artistic coordinator for IPAC. “Many of these 'journeyman' actors go their entire careers without ample recognition, despite the major contributions they have made. Lou continues to actively work in an industry that emphasizes youth. That is a major accomplishment in itself. And he makes me laugh."

Cutell is both thankful for the honor and the opportunities.

“I have so much to be thankful to the Coachella Valley for being so gracious to our production of Viagra Falls,” he says. “Receiving this honor at this time in my life, it’s like coming full circle. I think I’ve accomplished what I’ve always wanted to do…to be a working actor. Writing has been a bonus. I always knew in my mind it would happen. I want to encourage young people or older people to take the chance.”

Cutell knew he wanted to go into show business as a child and has been working steadily in the entertainment industry for decades. With roles in more than 70 movies and plays, his range spans musical greats like Guys and Dolls to contemporary stage roles for Neil Simon. You may recognize him from The Wedding Crashers, as Dr. Cooperman in Seinfeld and as Mr. Leo Funkhouser on Curb Your Enthusiasm. Cuttel says his favorite character was a bit he played in Gene Wilder’s The World’s Greatest Lover.

He is currently a regular cast member on Betty White’s prankster show, Off Their Rockers, on NBC.

“We will accost the marks with different improv themes that the writers give us the night before,” Cutell says. “It’s kind of retribution time. I’ve known Betty since The Mary Tyler Moore Show, and let me just say that what you’ve seen of this lady is the tip of the iceberg. She is so wonderful, warm, gracious, so giving.

“I’ve never worked with any performer as amazing as she is,” he adds. “I’m having the time of my life. It’s a wonderful thing for an actor to do improv. We get an idea and just roll with it. That keeps the mind going but it’s a wonderful release to not have to learn lines. I can say what I want to say.”