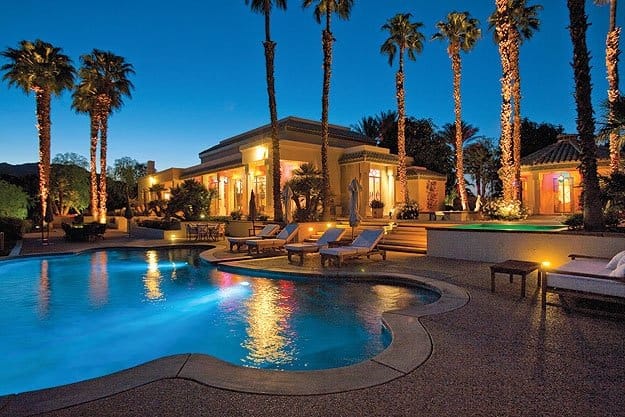 The homes of late Hollywood greats have been hitting the real estate market of late, and they are beginning to find buyers.

Merv Griffin's 39-acre equestrian estate in La Quinta has sold for $7 million, according to reports.

The sale comes on the heels of the Bob and Delores Hope's residence in Palm Springs being put up for sale at $50 million and the former Frank Sinatra hideaway above Palm Desert, Villa Maggio, going on the market for $3.995 million.

Griffin's house at 81-354 Avenue 54 will be used as a vacation rental for conferences and other events, according to Kinetic Properties. The estate has recently hosted after parties from the Coachella Music and Arts Festival over the last couple of years, going for as much as $80,000 as a rental, according to a July 2012 article in Palm Springs Life.

Griffin raised and bred race horses in La Quinta where the equestrian facilities included staff quarters and 16 stalls. One of Griffin's horses, Stevie Wonder Boy, won the Breeder’s Cup Juvenile in 2006. Griffin died a year later at age 82. The estate, which was built in 1986, was placed on the market in 2010 for $14.5 million, and then dropped to $9.5 million last year, according to reports.

This was a second residence for Griffin, who also owned a home in Bel-Air-Sherman Oaks, which sold a year ago by actor Albert Brooks for $6.2 million, according to reports.

The La Quinta property was anchored by a 5,000 square-foot main residence with a 2.5-acre lagoon, four free-standing guest casitas and two guesthouses for a total of 14 bedrooms and 12 bathrooms.

For more on the property and photos, read the July 2012 article in Palm Springs Life: As Time Goes By.