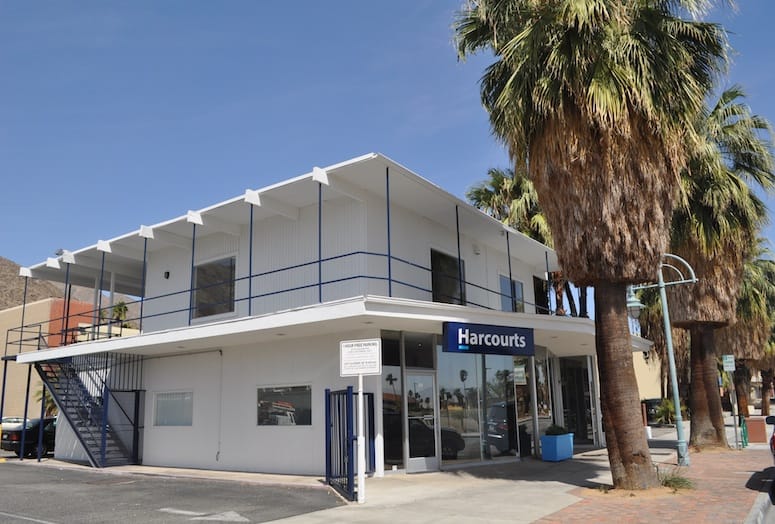 The exterior updates highlight the building’s midcentury charm. The Harcourts sign is from Signs by Tomorrow in Palm Desert.
PHOTO BY JIM POWERS

Palm Springs might be a small town, but it’s chock full of historic buildings with stories to tell. Some of those stories, however, are murkier than others. Take the one about the Liebling Trust Building at 119 N. Indian Canyon Drive, the new home of Harcourts Desert Homes, a franchise of the real estate brokerage Harcourts International.

“I spoke to the Palm Springs Historical Society and they told us there was a drawing that William Cody did for a development he proposed [for the site] called Palm Springs Colony Shopping Center,” says Josh Zipperman one of four partners in the franchise and also a partner at Burke Rix Communications. “And if you look at what’s here, it’s very similar [to the drawing]. I like to think this [building] is possibly Cody-inspired and whoever developed it could have used the drawings as a guide.” PHOTO BY JIM POWERS
The partners sourced everything for the interiors locally. The office furniture was done by Desert Business Interiors and the reception area furniture and various chairs are from the new Lux Mode line at Revivals.

The Historical Society also confirmed that, years ago, Welwood Murray's Palm Springs Hotel was located on the site and encompassed quite a bit of land before it was demolished in 1954. Further, a 1968 obituary for Abraham Liebling stated that, "He had numerous land holdings in Palm Springs, including the site of the old Palm Springs Hotel, originally owned by Dr. Welwood Murray, and subsequently developed by Liebling to carry out the image he envisioned for modern Palm Springs."

But the original architect and first tenant of the midcentury building — which was constructed in the late ’50s/early ’60s and is eligible to be listed as an historic property — remains a mystery. Some of its distinctive architectural features include post and beam construction, a wraparound balcony, and skinny metal pole railings. “We really love the feel of the building, the angles looking inside and outside, and the exposed beams,” says Zipperman. PHOTO BY JIM POWERS
A midcentury-inspired rock wall is a central feature of the lobby area.

“We wanted something architectural,” adds Brian Rix, another of the partners for Harcourts Desert Homes and Burke Rix Communications. “We really wanted to restore it, make it cool again, and that’s what we set out to do.”

The restoration of the building took about five months and although few changes were made to the exterior, the color was changed from a dull brown to white and blue, which are the Harcourts’ colors. Other updates included a new roof, the addition of a computer infrastructure, and all new electrical components.

PHOTOS COURTESY OF HARCOURTS DESERT HOMES >
Two previous tenants of the building include Salon 119 and the headquarters for Ginny Foats' 2015 campaign for Palm Springs mayor.

“Part of the reason we chose the building is because we are in midcentury modern Palm Springs and this is a midcentury modern building,” says Scott Palermo, another partner and the firm’s managing broker, principal (the fourth partner in the franchise is realtor Jim Sanak, who is married to Palermo and has worked with him for years).

“A standalone [building] spoke to the architecture [and that] speaks to the brand of real estate that we’re building with the Harcourts branded name, which is about the next generation of being a real estate brokerage,” Palermo adds. “So for us, this particular building served a whole host of purposes. We didn’t want to be put in with masses — we wanted to really stand out and [one way to do that] was to find a standalone building with the correct architectural elements.” PHOTO COURTESY OF HARCOURT DESERT HOMES
The partners undertook a complete restoration of the interior, including all new wiring and an infrastructure that can support current technology.

Although Harcourts is new to the desert, the company was established in 1888 in New Zealand and is based there and in Australia. The Palm Springs location is the 35th office to open in the U.S.— their first office was established in Newport Beach in 2010.

“They are the No. 6 real estate company in the world and did $30.7 billion in sales last year,” says Palermo. “So when you’re looking at other real estate companies, we’re not the known brand yet in the United States, but their focus is to come here and be a dominant player.” And it appears they’ve chosen the perfect location to become part of the local community and help chart a new history for the Liebling Trust Building. Palermo notes that, “We didn’t understand the eyesore that people thought this building was until the phone calls started coming in after the fact saying, ‘Thank you, you finally made that building beautiful.’”