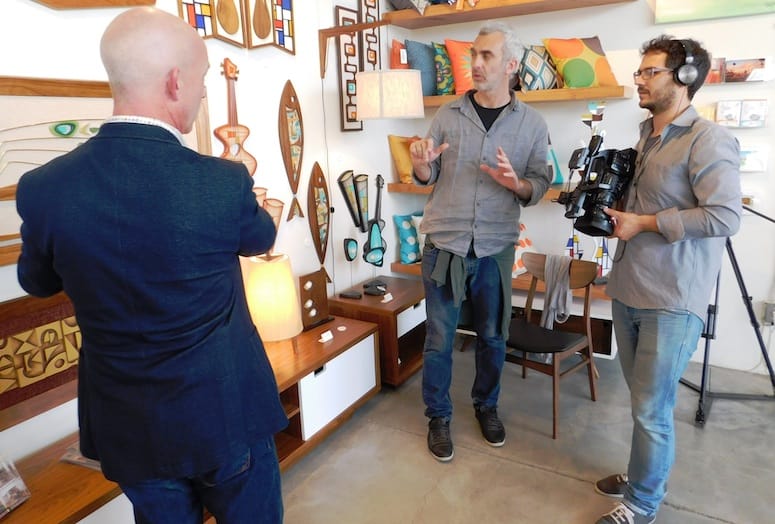 Moneta works calmly, but swiftly. He has only one afternoon to get the shots he needs for De.Sign, a Sky TV Italy show segment airing during the Milanese Salone del Mobile in April.

Chris Mobley, owner of Just Modern, wasn’t surprised when he heard a television director from Italy was coming to Palm Springs. As Modernism Week’s chairman of the Board, and a store owner in the heart of Palm Springs trendy Uptown Design District, he’s witnessed growing international attendance. From 2014 to 2015 alone, foreign attendance increased 15 percent. Italian Director Matteo Moneta and his camera operator Mateusz Stolecki set up for an interview with Chris Mobley.

“Modernism as a style, as architecture, as a culture, as fashion, is really popular worldwide and Palm Springs encapsulates old modernism and new modernism,” Mobley says.

Old or new, Modernism Week in Palm Springs oozes Mad Men style and parties that would make Don Draper proud. While Palm Springs isn’t the only city with modern architecture, it is the only place where midcentury modern homes with sleek, clean lines sparkle in sunlight against a backdrop of palm trees and the spectacular Santa Rosa and San Jacinto Mountains. A “swoon” worthy combination, says Australian entertainer Tim Ross. Australian comedian Tim Ross entertains at the home of Gary and Joan Gand in Palm Springs during a previous Modernism Week appearance.

Ross has made the long trek to Modernism Week three times, twice to perform his show, Man About the House. “The attraction for non Americans is that Modernism plays into our idea of how America should look,” Ross says. “For Australians who grew up with American TV of the 50s, 60s and 70s, it was what we saw on our small screens.”

Moneta was drawn to Palm Springs after he saw the documentary, Desert Modernism at the Milano Film Festival. He was struck by the sophisticated yet simple style aesthetic that can offer “beauty without a big budget.”

Polish journalist and TV producer Katarzyna Olechowska says she’s traveling the distance to Modernism Week because “experiencing architecture in person is crucial,” and in Poland, midcentury architecture is “hated for its connotation with communism. We have lost many incredible examples of architecture.” Eleven years ago when the first Modernism Show and Sale brought architecture enthusiasts to town, the founders had no idea their swanky two day mod experiment would turn out to be the right event at the right time in the right place, and garner such international interest.

Just a handful of people attended that first year. Last year, almost 60,000 people flocked to Modernism Week to experience what Ross calls the “best celebration of Modernism in the world.”

“Modernism Week is a celebration of dreamers and their brave and uncompromising ideas,” Olechowska  says. “I think the event attracts people who are a bit like those trailblazing architects who chose the impossible task of building a city in the middle of the desert.”