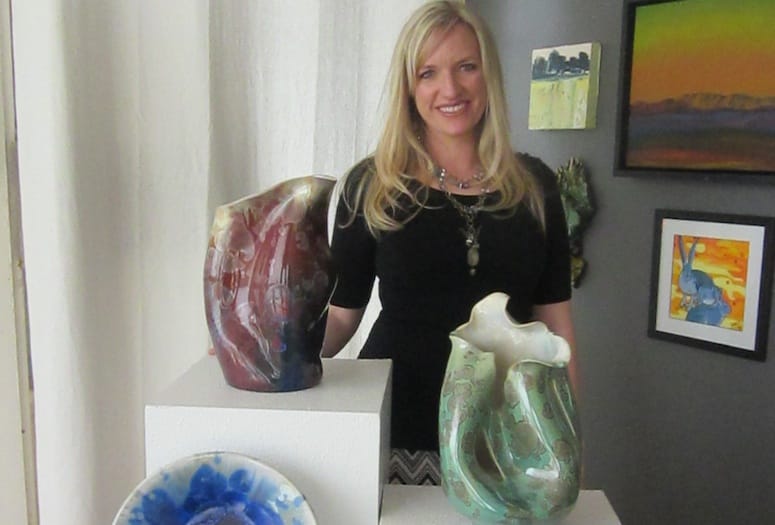 This difficult and time-consuming process done at an extremely high temperature is called “crystalline glazing,” and not many artists attempt it because of its high failure rate. In fact, only 5 to 7 out of 10 pieces that Vikdal makes survive.

Many are broken in the electric kiln or crystals fail to appear, which can be disheartening after they have been molded, shaped, glazed, and fired. “Yet, the ones that survive are worth the effort,” says Vikdal, who is one of the the 27 artists from the Morongo Basin Cultural Arts Council showing at the “Small Works” exhibit at Gallery 62 in Joshua Tree opening June 13 and running through the end of the month.

Besides ceramics, there are paintings, photographs, mixed media, and sculpture at the “Small Works” show. Like the special terrain of the area, many of the pieces are landscape or nature related, says Alita VanVliet, retiring director of Gallery 62.

New director Jennifer Henning hung the show, which is well grouped according to shape and color, and spans into two small rooms.

Vikdal says that she was encouraged to create art by her parents, who were both artists. Yet, she became serious about ceramics when her newlywed husband gave her a potter’s wheel. “He also built me a studio in our home, so I can keep the mud in one place,” she laughs.

Photo by Marcia Gawecki
Gallery 62 director Alita VanVliet, who is also an artist, looks at a sampling of the “Small Works” show at Gallery 62 featuring paintings, photography, sculpture, and mixed-media pieces.

More wheels, two kilns, and 20 years later, Vikdal has found her niche with organic shapes and crystalline glazes. Her ceramics are collected by people from all over the world. Last week, someone from South Africa bought one of her pieces. Sometimes people will want her to make an exact duplicate of a particular piece, but that’s impossible, explains Vikdal.

“The crystals form on their own, and you just never know what to expect,” she says. “So each piece is unique. Each firing is difficult. It takes sometimes 15 hours to fire, while watching and adjusting the temperature. Then sometimes no crystals appear at all!”

But the ones that do appear are so spectacular, it’s worth the effort, she says. It’s similar to crystals or geodes forming in nature, each one is a natural wonder. Oftentimes, when the piece is twirling on the potter’s wheel, it takes a shape of its own.

“I pretty much let the clay do what it wants, because after about 15 minutes, it ‘tires’ easily,” Vikdal says.

So she lets vases turn into wavy tops or lets a split appear down the center. “Creating a piece on the potter’s wheel is my favorite part, but it’s often the shortest part of the process,” she says.

The ceramics she creates are made from porcelain clay and can take up to two weeks to dry. She covers them in plastic so that they dry slowly, If a ceramic piece drys too quickly, it can shrink and crack.

“Small Works” is open through the rest of June at Gallery 62, 61871 29 Palms Highway, Morongo Valley. Gallery hours are 11 a.m. to 5 p.m. Fridays, Saturdays and Sundays. The gallery is closed Juy and August. Information: www.hwy62arttours.org