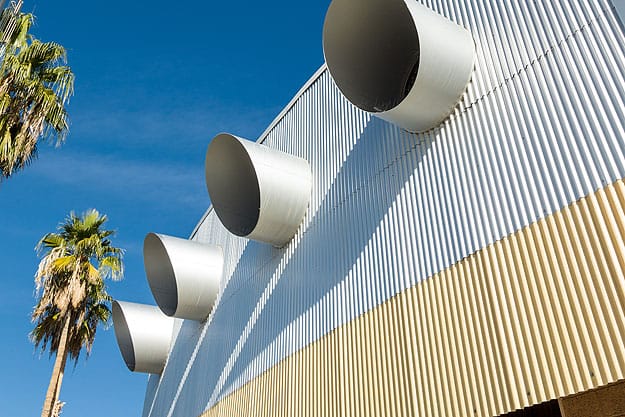 What is three-stories tall, lived a heyday existence decades ago, and still draws thousands to gaze upon its curvaceous angles? In downtown Palm Springs, it is the statuesque Forever Marilyn, with her coquettish smile and billowing white skirt that coaxes people to take a closer look. But the desert has icons beyond the traffic-halting blonde on Palm Canyon Drive. Historic buildings, like screen sirens in their golden years, with their classic features and “if these walls could talk” legacy, elicit the same passionate ardor from their admirers.

“Our architecture is becoming internationally renowned, and it has the potential to transform the city,” says Ron Marshall, president of the 1,800-member Palm Springs Preservation Foundation. “[As] architectural tourism becomes bigger and bigger, it’s become the golden goose of Palm Springs economy.”

During Modernism Week, the foundation’s vice president, Gary Johns, gives a lecture — “Lost, Saved and Endangered: Modernist Architecture in Palm Springs” — that’s standing room only. “Attendees eat up the stories of Palm Springs and its history, [such as] the grainy photograph of Liberace waiting in line to be among the first to gain entrance on opening day of the J.W. Robinson’s department store,” he says.

While that building awaits its Class I Historic designation from Palm Springs City Council, one need only to look at the former Santa Fe Federal Savings & Loan building across the street to see how preservation promises to revitalize this part of Palm Canyon Drive. Palm Springs Art Museum has begun transforming the E. Stewart Williams-designed building, with its cantilevered concrete base making it appear to float above the street, as an architecture and design center known as Edwards Harris Pavilion.

Not every architecturally notable structure enjoys the same fate. Some, like the Donald Wexler-designed Palm Springs High School administration building that was recently demolished, only strengthen the nonprofit foundation’s resolve to preserve other “endangered” properties, like the seven that appear here. The irony of a sailing vessel in the middle of a desert was not lost on pioneer modernist Albert Frey, the architect responsible for most of the North Shore Yacht Club’s stylistic markers. The structure reflects International Style’s Bauhaus beginnings with its utilitarian materials, rectilinear forms, open interior spaces, suspended staircase, and glass and steel construction. Plans for a recreational community with the recently restored yacht club as the centerpiece are dying like the Salton Sea itself. Today, the building, which ironically once housed the Salton Sea Historical Society, is sometimes used as a community center but otherwise closed to the public. Originally called the Colburn Center, this mixed-use development of offices, housing, and retail — with its pedestrian-friendly courtyard — reigns as the longest-running preservation controversy among the city, Wessman Development, and Palm Springs Preservation Foundation. Competition came in the 1960s when the Desert Inn mall (later Desert Fashion Plaza) opened across the street, and a later expansion instigated a decline in both centers. Measure J, the city tax initiative to help fund downtown revitalization, triggered the demolition of Desert Fashion Plaza. Although Town & Country was dropped from the measure to help ensure it would pass, the structure’s fate remains unclear since the city denied its historic designation in 2009. Palm Desert’s first commercial building, once surrounded by open highway sand dunes, housed Desert Magazine, a gallery that featured important regional artists, a gem shop, and other endeavors over the years. It stands out with its Pueblo Revival flat roof, stepped levels, deep window and door openings, and protruding wooden beams (vigas). A recent city council proposal would remove the building’s principal façade details, stripping it of these defining features — a modification that Palm Springs Preservation Foundation says conflicts with California’s environmental protection laws and calls “nothing short of a tragedy.” Designed by Frank Lloyd Wright’s son using the family’s signature Wrightian organic style, this three-story tower with the pyramidal roof was the tallest structure in Palm Springs before El Mirador Hotel Tower was built in 1928. The Oasis Tower provided access to the hotel’s upper-story rooms, and Hollywood’s glitterati of the time — including Loretta Young, Clark Gable, John Wayne, and Shirley Temple  — were notable guests. Wright built the hotel using slip-form construction and concrete block, a method he and his father pioneered in Southern California. It is thought to be the only Lloyd Wright-designed building in Palm Springs. Little of the original hotel has survived, and although the tower has a Class 1 Historic designation, it is vacant and vulnerable to neglect and fire. Before joining his father and brother in their California architectural practice, E. Stewart Williams worked briefly for famed product designer Raymond Loewy on projects for the 1939 New York World’s Fair. There, Williams saw the work of Brazilian architect Oscar Niemeyer and, although Williams never confirmed it, Niemeyer’s influence might have surfaced in Williams’ plans for the Oasis Commercial Building. Its “floating” upper level with the courtyard opening to the sky recalls the fair’s Brazilian Pavilion, a Niemeyer design. Palm Springs Preservation Foundation considers this a building to watch because of its “anemic” historic designation, which protects only the second floor and leaves the first-floor façade vulnerable to change. 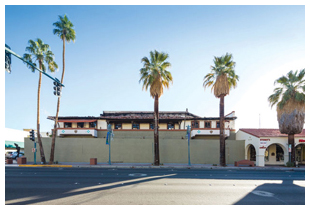 National Cash Register heiress Julia Carnell, who wintered in Palm Springs, commissioned Schenck & Williams to design the Carnell Building and later La Plaza Shopping Center in Palm Springs, introducing Harry Williams to the desert (his eldest son, E. Stewart Williams, became one of the most prominent architects of midcentury Palm Springs). An eclectic blend of cultures and styles influence Spanish Colonial Revival, from the thick stucco wall construction to the low-pitched clay tile roofs reminiscent of the Mediterranean. Small balconies and decorative iron trim are signature elements. A fire last summer nearly destroyed the Carnell Building, a Class 2 Historic Site, but the owner has indicated that it will be rebuilt. What do you get when you combine the contemporary sensibilities of surfer-turned-restaurateur Alfred Ernest “Buzzy” Bent with American organic architect Kendrick Bangs Kellogg? The Chart House Restaurant, which unfolds like a giant sea creature and boasts an iconic, undulating roofline that appears to grow out of the hillside. Kellogg’s work seems to defy gravity and categorization, but it embraces Frank Lloyd Wright’s vision of harmony between humans and the natural world. A $5-million fire gutted the restaurant, and demolition looked imminent until preservationists engaged leaders to save it.

Sign up for free Palm Springs Preservation Foundation online membership to receive quarterly newsletters, notifications of meetings and events, and a web version of Class 1: A Guide to the Designated Class 1 Historic Sites of Palm Springs.
www.pspreservationfoundation.org

Retro for the Future

Put on your best vintage cocktail attire and celebrate your inner modernist at the Retro Martini Party to benefit Palm Springs Preservation Foundation grants and programs. The party unfolds from 5 to 8 p.m. on Feb. 22 at the William Cody-designed Abernathy House, a spectacular pavilion-style property and preservation success story. Tickets are $125. www.modernismweek.com