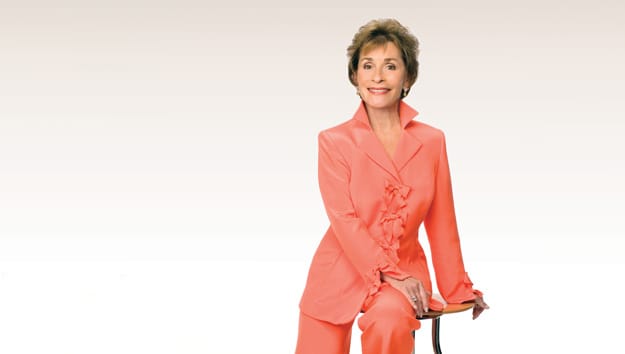 An off-camera conversation with Judy Sheindlin dramatically contrasts with an appearance in court before “Judge Judy.” She doesn’t bark, sneer, or lean forward to point at you and shout, “Don’t pee on my leg and tell me it’s raining!”

“Here I am in Naples, Florida,” she says in a calm, pleasant voice, “which is our home from November through May, and I’m looking out on the beautiful Gulf of Mexico. There are people on the beach, the seagulls are flying past our window, and all is right with the world.”

On April 27, Sheindlin and Larry King will be the keynote speakers at Barbara Sinatra Children’s Center Cherish the Child Luncheon in recognition of Child Abuse Prevention Month. Family — her own and others’ — has been the lynchpin of Sheindlin’s success.

She began her career as an attorney specializing in family law and served 25 years on the bench as a judge in the family courts of Manhattan, N.Y. In 1993, her no-nonsense judicial approach resulted in an article that appeared in the Los Angeles Times, followed by a 60 Minutes profile on CBS.
Judge Judy premiered in syndication on Sept. 16, 1996. That year, her first book (Don’t Pee on My Leg and Tell Me It’s Raining) appeared; her second book (Beauty Fades, Dumb is Forever) in 1999 became a best seller.

The astounding success of Sheindlin’s television show has made her one of the most recognizable faces in America. According to Variety, the show — in its 13th year and contracted through the 2011-2012 season — guarantees her an annual income of $38 million. The second-highest-paid woman on television (behind Oprah) grosses $760,000 each day she tapes her show.

“It’s a wonderful schedule,” she says. “I shoot for 50 days each year. We do a week’s worth of programming in one day. I fly to Los Angeles every other week for two or three days, and I do that for eight months a year.”

In the summer months, she and her husband of 31 years, retired Judge Jerry Sheindlin, reside in Greenwich, Conn., where they entertain their five children and 11 grandchildren.

“We’re a close-knit group of people,” she says. “If we go to see the kids or grandkids, we see them for a couple of hours. It’s not as if we baby-sit them or it’s, ‘Oh, the folks are coming for the weekend.’ Seeing us is usually fun for them. We have a big place, and the grandchildren love to visit. There’s a lot to do, and we like making it sort of a fantasy place where they enjoy spending the afternoon. But they know their parents and grandparents have their own space, their own lives, and their own interests.”

Sheindlin attributes much of her success to her own upbringing. “I think every child should have at least one parent — I had two — who makes them feel unique and special,” she says. “This gives every kid a wonderful sense of self that lasts a lifetime. I got that from my father. If you have that, anything else that comes your way in life you’re going to be able to negotiate.”

While in law school, Sheindlin married Jerry, a divorced Manhattan defense attorney with three young children. The couple had two children and divorced after 12 years of marriage because she was unable to cope with her father’s death. One year after the divorce, she realized she made a mistake; the relationship resumed and they remarried.

Her definitions of marriage and family are inclusive, and she is in favor of gay marriage. “Two people work, pay taxes, act responsibly — as far as I’m concerned, the state should have no issue if they want to be married and have a union that allows them to inherit and take advantage of the tax benefits of marriage.”

Sheindlin reflects on family issues that have come before her as a judge.

“If you want to turn around the lives of children at risk,” she suggests, “give them an ear and someone to talk to, so they don’t feel responsible for what’s going on in their home. At the same time, find something that makes them feel special, something they are naturally adept at that allows them to excel. That’s what builds a strong sense of self.”

When counseling and support are inadequate to correct a problem, Sheindlin supports more stringent measures.

“When a child reports abuse and the courts find the situation is such that the child is not safe, the child is removed from the home. As soon as the court is involved, most courts assign an attorney to the child. The attorney does not represent the parents or the courts, but the child. That attorney is charged with making certain there is an open communication between the child and the court that is not affected by the parent or the abuser. Can we be sure the abuse won’t recur? No. But I think with the advent of law guardians who are lawyers for children, most courts now have sensitivity to abuse and understand the importance of removing a child from the abusive situation. But they also appreciate foster homes are not always a panacea.

“The most important thing we can do for children is give them a sense of self-esteem,” Sheindlin reiterates. “That can never be taken away. We have a difficult economy; some people are going to make it and some aren’t. The people who committed suicide because they no longer have $500 million but only $20 million — they didn’t learn the lesson. Their entire being was wrapped up in what they had. These aren’t people who had to go on the dole. They still had something. But so much of who they were was defined by what they had instead of the wonderful thing called self-esteem, which would have allowed them to know they could always rebuild.”

For information on or reservations to the Cherish the Child Luncheon at Miramonte Resort & Spa in Indian Wells, call (760) 773-1636.