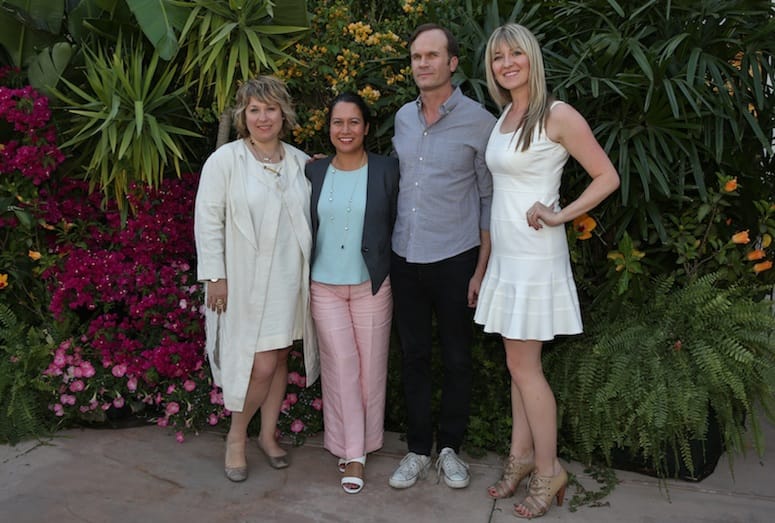 Zoe Crosher remembers the inspiration that came driving from Los Angeles to Phoenix to visit her then boyfriend (and now husband) back in 2008.

“Whenever I crossed the border into California, I kept asking, ‘Where is California? Where is Los Angeles?” says Crosher, a Los Angeles-based artist. “It’s this really deep, deep dark desert. You really don’t know where you are. There is a really big gap between there and here when you start recognizing the Southern California everyone knows.”

Crosher expanded those thoughts into a chapter of The Manifest Destiny Billboard Project on Interstate 10, which opens in the Greater Palm Springs area beginning this weekend with a special set of events curated by the Palm Springs Art Museum in Palm Desert.

The Manifest Destiny Billboard Project is a series of artist-produced billboards and activations that will unfold along Interstate 10 Freeway from Florida to California through spring 2015. The project was conceived by Crosher and is co-curated by the artist and LAND's Director and Curator, Shamim M. Momin. Using the concept of Manifest Destiny – America's territorial expansion across North America – the artists explore this problematic and layered history.

Crosher's chapter, entitled LA-LIKE: Shangri-LA’d, was created by staging a lush landscape in Los Angeles. She photographed the entropic installation onsite to track its transforming and decaying façade. This wall of flora embodied the fantasy of Los Angeles and the promise of the western ideal. As the billboards unfold over space and time traveling west along I-10 in the Palm Springs area, the lush green foliage — symbolic of the promise of abundance  is in stark contrast to the barren desert landscape, and becomes increasingly withered and brown.

The launch of these billboards is presented in conjunction with Crosher’s installation at the Palm Springs Art Museum in Palm Desert. The installation, titled Expanded LA-LIKE: The Actual Shangri-LA’d Disappearing Wall, includes various activations and events taking place during the opening weekend celebration in Palm Desert and Desert Center. A new version of the flora wall as depicted on Crosher’s billboards has been installed on the museum’s grounds in collaboration with Palm Desert floral artist Briana Burt of Eventscape.

In addition, Palm Springs Art Museum in Palm Desert has commissioned Benzel’s Desert Center (Composition I-10, Mvmt IV: Dusk), a sound composition designed to respond to the traffic patterns and harmonics of the I-10 freeway. The first iteration of the performance takes place in the Faye Sarkowsky Sculpture Garden during 1st Friday at The Galen from 7:30 to 9 p.m. April 3.

The second performance will take place at the site it was originally conceived for, a remote palm tree-studded location in Desert Center, at dusk on April 4.

As part of its Earth Day Celebration, the Palm Springs Art Museum in Palm Desert is hosting a talk with Momin about The Manifest Destiny Billboard Project, at 11 a.m. April 4. Finally, a project room inside the museum will feature documents from Crosher’s planning, musical scores from Benzel’s commission, maps to locate the sound performance and billboards, and other ephemera.