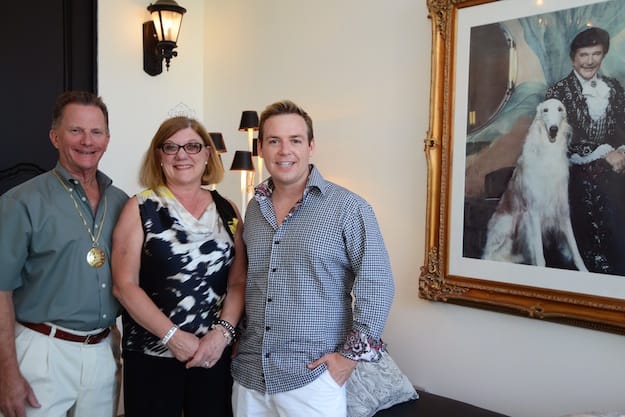 From the half-circle driveway, the long white Cadillac parked in front, the long slender white pillars and the musical notes on the gated front entrance, this is clearly a house of importance.

Owners Betsy Smalley and Garth Gilpin have maintained an ‘open door’ policy ever since they purchased the Old Las Palmas property in Palm Springs, which was owned by Mr. Showmanship himself, Liberace, from 1968 to 1972.

So when HBO premiered “Behind the Candelabra” on its network May 26, the couple literally opened every door in the house, creating the perfect party palace for nearly 100 guests to view the celebrated movie based on the book penned by Liberace’s former lover, Scott Thorson.

“It’s like serendipity, the timing of it all, and the resurgence of Liberace after we finished the house,” said Palm Springs-based designer Christopher Kennedy, who helped Betsy and Garth modernize the interior of the house.

Segments of the film were shot in Palm Springs, and Gilpin said the HBO people came by to look at their house, took photos and spent nearly two hours, but ultimately declined.

“They said it was too modern so they passed on it,” Gilpin said.

Betsy was surprised the front exterior of the house, which faces North Kaweah Road off of West Ver Notre, wasn’t included in the movie. Liberace actually created that entrance, which originally faced West Ver Notre.

“This is where he lived, and his brother lived here after that. His mother was here. Everything in front, the drive way, the pillars, and the fountain are all from when Liberace owned it,” Betsy said.

Still that doesn't stop visitors from wanting to continue to see the house, which is part of the tour of Palm Springs movie star houses and also was a stop for last year's Modernism Week. The couple have dotted the interior with items that reflect Liberace’s continued presence. They continue to add things, like recently purchased albums found at a local consignment store or an autographed Liberace photo from a neighbor in Pasadena where Betsy and Garth live full-time.

"People still like to come inside and they will ooh and ahh," Gilpin said.