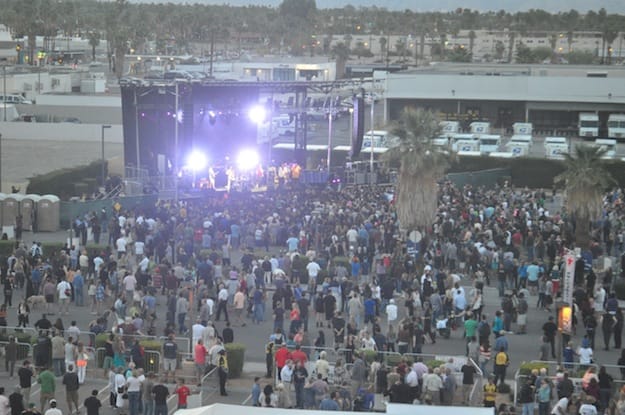 Which two words were most eagerly shouted from their lips? Passion Pit.

The East Coast rockers brought their synth-pop cool to the April 17 free concert event held in downtown Palm Springs. An estimated crowd of 10,000 filled the parking lot of Spa Resort & Casino to hear music by the Coachella artists, as well as checking out live sets from locals You, Me & Us, Pedestrians, Tribesmen, and DJ Alf Alpha.

Passion Pit bookended its set with performances of “Take a Walk” and “Little Secrets.” Seas of smartphone cameras and waving hands hovered over the crowd as singer Michael Angelakos enraptured the audience. Other sterling moments in the band’s set included performances of the hit singles “Sleepyhead” and “The Reeling”.

While Tachevah was a huge draw for everyone in the community, it did provide an outlet for younger residents to congregate and enjoy music and pop culture in a safe environment. From as far away as Uptown, the crowd was heard shouting and cheering for each act, with growing intensity.

Local rockers, Pedestrians, received an energetic welcome from fans that rushed the stage to hear the band’s bass and funk-infused jams. You, Me & Us delivered charming melodies and pitch-perfect indie rock hooks in between its scheduled Coachella performances in Indio, April 12 and 19. DJ Alf Alpha dazzled with his stellar mastery of the ones-and-twos. The Tribesmen kicked off the event, bringing moody and experimental shoegaze to its fans.

In light of the terrorist attack at the Boston Marathon April 15, there were no reported incidents at Tachevah. Extra security was on hand to ensure the safety of attendees, and volunteers were quick to enforce the rules and regulations of attending the concert.

Given the turnout at Tachevah: A Palm Springs Block Party, and the support of the local youth who pumped some much-needed energy and money into the downtown landscape, organizers should consider the event an overwhelming success.