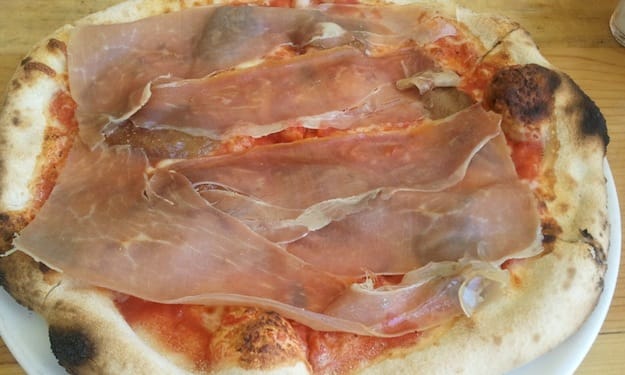 Outdoor temperatures have been rising up to 110 degrees lately, but that’s cool in comparison to what’s going on over at Piero’s Pizza Vino in Palm Desert.

Inside the restaurant’s kitchen, their wood-burning oven is heated to 800 degrees — all the better for preparing a large variety of authentic Neapolitan pizzas in just 90 seconds.

The other three key ingredients for turning out those perfect pies are San Marzano tomatoes from Italy, house-made cow’s milk mozzarella cheese, and dough made from 00 (aka double zero) flour.

“We make the dough every day, but it ferments for three days,” said Piero’s General Manager, Melissa Zielinski. “With 00 flour you can only add a certain type of water and the dough is so delicate that it will be ruined if the room isn’t the right temperature.”

Zielinski said a couple of their most popular white-sauce pizzas are the Quattro Formaggi with raw honey and gorgonzola, parmesan, mozzarella, and taleggio cheese; and the Bubba-Bubba — mozzarella, crumbled Italian sausage, caramelized onions, and mushrooms.

“The Bubba-Bubba hasn’t always been on the menu, but the first day we added it we must have had 30 orders,” said Zielinski.

For red sauce fans, Zielinksi suggests her personal favorite, the Capricciosa, made with tomato, mozzarella, ham, mushrooms, artichokes, and black olives. She’s also a big fan of one of my favorites, Prosciutto e fichi, which makes the most of sweet, fresh figs.

And if you’re looking for gluten-free options, you’ve come to the right place. Zielinski said some days almost half the pizzas they sell are gluten free. In response, the restaurant now has an entire gluten-free menu.

You’ll also want to explore some of Piero’s many non-pizza dishes such as the sweet and salty sensation of fried zucchini blossoms — stuffed with ricotta cheese and topped with raw honey — or fried New England clams.

“The clams are for east coasters like myself,” said Zielinksi, who is originally from New Jersey, “and we’re the only restaurant in the desert that features these clams that come from Ipswich, Massachusetts.”

Zielinski is also a big fan of the Tuscan Wedge salad. “We put a different spin on it by adding deep-fried prosciutto bites and pine nuts, along with our house-made sweet gorgonzola dressing,” she described.

Soon, Piero’s will be able to seat even more pizza lovers. Owner Piero Pierattoni has acquired a former nail salon that was located behind the restaurant. Zielinksi said they hope to have their expansion completed by the end of the summer.

One thing that won’t change is Piero’s simple four-ingredient formula for pizza success.