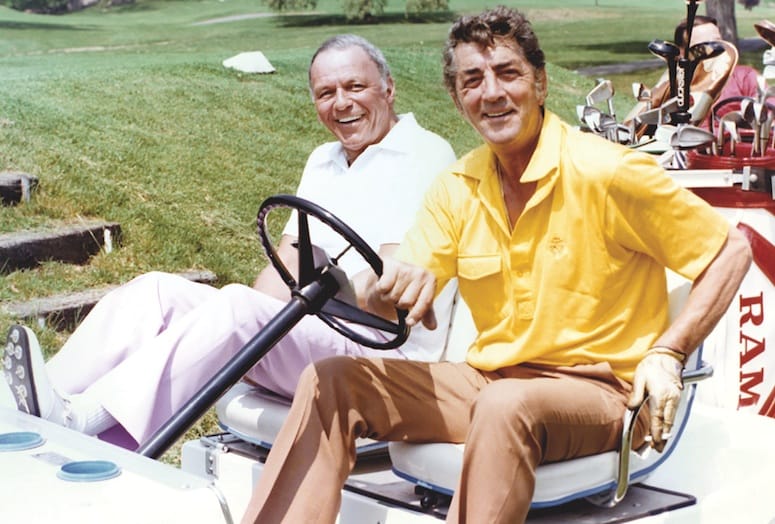 Host to six-plus decades of golf’s greatest names and most legendary games, the Coachella Valley’s singular influence upon the golf world may be best evidenced by one round of play.

In February 1995, in the first round of the former Bob Hope Chrysler Classic, a fivesome for the ages teed up at Indian Wells Country Club. Putting politics aside for the day, former Presidents Gerald Ford and George H.W. Bush paired with then–President Bill Clinton (the first sitting president to play a PGA Tour event), Hope, and defending champion Scott Hoch in a showcase of illustrious desert golf. “We are as nervous as cats,” Clinton told NBC television as the historic group approached the first tee amid 20,000 eager spectators. What followed over the course of 18 holes did not a lesson in golf instruction make: Bush shot a 92 to Clinton’s 93, while Ford hit the 100 mark — and Bush and Ford would strike spectators with errant shots on the day. The monumental moment in time, however, reflected the enduring narrative the desert has imprinted on the golf world since the early 1950s.

Long before world-renowned tournaments like the current Humana Challenge became an annual PGA Tour stop, the valley played host to the country’s top golf talent and served as a desert marquee for the world’s most celebrated entertainers.

Constructed on a former dude ranch in what is now the city of Rancho Mirage, Thunderbird Country Club opened in 1951 as the valley’s first 18-hole golf course. Bound by studio contracts that disallowed travel beyond 100 miles during time off, such Hollywood elite as Bob Hope, Bing Crosby, Jack Benny, Hoagy Carmichael, Phil Harris, Lucille Ball, and Desi Arnaz became members of the club, adopting the setting as a regular escape. The Thunderbird Invitational debuted in 1952, essentially emulating Crosby’s wildly popular annual pro-am “Clambake” tournament in Northern California and instantly putting desert golf on the national map. The first invitational mixed the era’s best golf talent with Hollywood stars, proving a potent recipe from the outset and drawing the likes of Ben Hogan and Byron Nelson to the desert.

Ensuing invitationals continued to attract golf luminaries, and a host of celebrated victors enhanced the event’s clout. In 1953, three-time Masters champion Jimmy Demaret held off six former U.S. Open winners en route to the first of his three wins at the event.

After Demaret claimed consecutive titles in 1956 and 1957, two of golf’s most beloved figures dug their respective spikes deep into the sands of desert lore. In 1958, Ken Venturi (runner-up to Demaret the year prior) claimed victory and jump-started a four-win season. For his efforts, he was presented with a new Ford Thunderbird (named for the club) and an envelope of 20 $1,000 bills as his share of the Calcutta. It comes as little surprise, then, considering the benefits for his ’58 triumph, that Venturi began a longtime love affair with the desert.

Arnold Palmer won the final invitational in 1959 in royal fashion with a final round (and course record-tying) 62 to capture the first of his eventual six valley wins. Like Venturi, on-course success was mirrored by local adoration for “The King,” who became a desert mainstay and whose modern-day, part-time valley residency is complemented by nine local course designs bearing his name. The event evolved to become the Palm Springs Desert Golf Classic in 1960, and the increasingly popular pro-am tournament officially became a PGA Tour event. Adopting a multicourse format that meshed with the celebrity element, the 1960 tournament marked Hope’s first time playing in the event. Desert Classic Charities — the tournament’s still-active philanthropic arm — also debuted that year, and has raised more than $52 million for local organizations to date.

In 1962, Palmer soared to victory in what had by then become the Palm Springs Golf Classic, catapulting him and Hope to a win in the pro-am portion of the event. In the ’63 Classic, Jack Nicklaus felled Gary Player in an 18-hole playoff amid a season that would see the Golden Bear stomp to major wins at both the Masters and PGA Championship.

Two years later, in 1965, Hope, backed by sponsorship from Chrysler, added his name to the tournament and cemented the legacy of the valley as a world-renowned golf paradise. Hope and wife Delores also extended the tournament’s philanthropy by donating 80 acres for construction, literally laying the land to build Eisenhower Medical Center. The tournament adopted a five-day format to pair sun and celebrity and became as synonymous with its 90 holes of play as its ever-present “Classic Queen” ambassadors (eventually dubbed the “Classic Girls”), which included stars such as Debbie Reynolds and Jill St. John. In 2012, nine years after Hope’s passing, Louisville, Kentucky–based healthcare giant Humana teamed with the Clinton Foundation in an eight-year commitment to sponsor the event. Bringing a message of health and wellness to the tournament, the Humana Challenge is played in a four-day, three-course format each January.

Through 2015, the Humana will continue to take place in La Quinta at the Arnold Palmer and Jack Nicklaus Private Course at PGA West and at the historic La Quinta Country Club. In 2016, the tournament will offer a new course rotation, replacing the private tracks at PGA West with two alternate valley courses to be named.

The year was 1988, and the splash spontaneous. When Hall of Famer Amy Alcott leaped into Poppie’s Pond alongside the 18th green at the Dinah Shore Tournament Course after claiming her second Kraft Nabisco Championship victory, the waves created a celebratory tradition that ripples from the desert across the sporting world every year. Though Kraft Nabisco will no longer be the title sponsor of golf’s first major championship of the season, the Dinah course and victor’s leap at Mission Hills Country Club in Rancho Mirage will be back for a 44th straight year in 2015.

Broadcast in about 140 countries and featuring the top 100 players in the world, the tournament is as revered for its array of champions (Hall of Famers Betsy King, Alcott, and Annika Sorenstam are all three-time winners) as it is for the victor’s leap. Three years after Alcott’s third Kraft win in 1991 (which saw Shore get into the pond with the victor), the leap become an annual ritual. From cartwheels (Patty Sheehan in 1996) to cannonballs (Karrie Webb in 2006) to a pool party complete with a mariachi band (Lorena Ochoa in 2008), the annual plunge into history is a crowning achievement for women at the apex of their game.

Founded as the Colgate-Dinah Shore Winners Circle in 1972, the tournament evolved into a major championship a decade later, a year after Nabisco’s name first accompanied the championship. Aside from the Masters, the event is golf’s longest-running tournament continually held at the same course. Amid a pro golf culture of ever-changing tournaments and locales, the event has remained a thrilling cornerstone of LPGA consistency.

“Not only does the event represent such a huge piece of golf history in the desert, but it also represents a huge piece of LPGA history at one place,” says Gabe Codding, tournament director of IMG Golf.

An employee of the event for the past 20 years, Codding has served as tournament director for the former Kraft since 2009. “Mike Whan, the commissioner of the LPGA, was very outspoken leading up to the 2014 event and even after the tournament, saying that the tournament will be here even if the LPGA has to own and manage it,” Codding adds.

The 1950s saw the desert host the biennial Ryder Cup matches between the United States and Great Britain twice in a span of four years.

As a point of historic prestige: In the 20 Ryder Cup matches played on American soil since 1927, aside from dual desert Cups, only two states (Ohio and Massachusetts) have twice hosted the matches now played between the U.S. and continental Europe. Ohio waited 56 years to host its second Cup, while the Ryder matches in Massachusetts were separated by a span of 72 years. Four years later, however, Eldorado Country Club in Indian Wells saw an American team looking to take back the Cup after the U.S. had lost to the Brits 7.5–4.5 in 1957 in Yorkshire, England. And the Americans didn’t disappoint. Less than two years after the Eldorado opened, the U.S. reclaimed the Cup there, winning 8.5–3.5. Captained by Snead, the Americans led just 2.5–1.5 after the opening day’s foursome matches but steamrolled Great Britain in the following day’s singles competition.

The week of the event, Sports Illustrated featured Eldorado on its cover with the heading: “Out-of-this-world setting for the Ryder Cup matches.”

Its editorial pages read: “The golden setting of Eldorado is, in fact, so manicured and magnificent that the first duffer to behold its $3 million beauty was moved to murmur it was so gorgeous it was a shame to have to spoil it by going out and playing golf on it.”