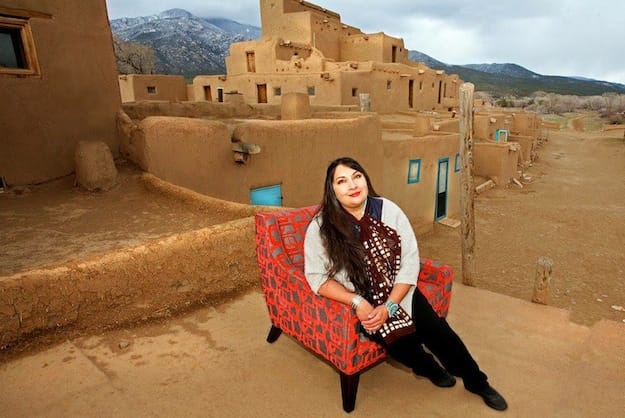 Patricia Michaels, a runner-up finisher from Season 11 of  “Project Runway,” will be among 10 Native American designers who will showcase their fashions, jewelry and accessories during the Native American Fashion Show July 5 at Idyllwild Arts Foundation Theatre (IAF).

Attendees can expect a spectacular, full-fledged fashion event, which kicks off with the Cahuilla Bird Singers, and showcases professional models and a 3-D audio-visual presentation. Most of the fashions can be seen, touched and purchased during a reception immediately following the event, which also features Native American foods created by Freddie Bitsole.

“Fashion is something that you have to experience live and in person,” said Dr. Jessica Metcalfe, who is producing the show. Her online Native American boutique, Beyond Buckskin, features only Native American-made art, fashion and jewelry.

“There is great diversity, beauty and richness in our culture,” Michaels added in a phone interview from Taos, N.M. “But some people think they’re experts on our culture because they’ve been to one Pow Wow.”

On Season 11 of “Project Runway,” Michaels told the judges that her fashion line, with its bold colors, dancing headpieces and embroidered fabrics, was about trees.

“Trees give us energy. They’re grounded, deeply rooted and connected,” Michaels said. “A tree can withstand a lot, like drought and freezing temperatures, but it remains strong.”

Her model’s headpieces, with their long, dyed strands, looked like they were dancing when the models strolled down the runway.

“That’s the way trees look at the top — when you’re holding them,” Michaels explained. “The tops are always dancing.”

Michaels will feature four pieces at the Idyllwild show, including one based on trees.

“It’s a black and white silk organza dress that I haven’t shown to anyone yet,” Michaels said. Her other pieces include a slip dress with eagle feathers, a men’s tuxedo shirt with macaw feathers and a new twist on a cape.

Michaels will limit her pieces as she prepares for New York Fashion Week and the Santa Fe Indian Market in September, said Heather Companiott, director of the Idyllwild Arts Native American Arts Program. The rest of the designers will show 6 to 12 “looks".

“These fashion designers represent tribes from across the continent that are exploring exciting new directions in contemporary fashion,” she said.

Metcalfe recalled how her favorite cape transforms her.

“I stand up taller when I wear it,” said Metcalfe, who is petite. “I can actually feel its energy. And by standing proudly, it gives full credit to its Native American designer.”

The Native Arts Week Fashion Show will be held at the IAF Theatre at 7 p.m. July 5. The event is free and open to the public. Idyllwild Arts is located at 52500 Temecula Road (at the end of Tollgate) in Idyllwild. For more information, visit www.idyllwildarts.org or call (951) 659-2171, ext. 2361