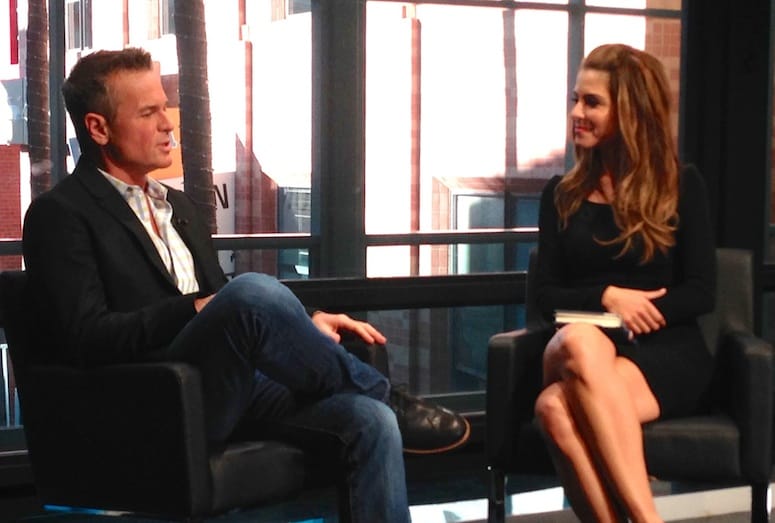 Sam Harris is not holding out.

In his recently published autobiography, HAM: Slices of Life: Essays and Stories, Harris says, “There were few stories that we saved for the next one.”

After being discovered on Star Search in 1983, Harris’ career blossomed into a string of Broadway musical roles in such hits as Grease, The Producers, and The Life, which included a Tony Award nomination.

Harris has put those experiences down in a collection of essays and stories in his book, which he will sing and discuss March 16 at the Palm Springs Public Library. A portion of the proceeds benefits the Library and Friends of Palm Springs Library.

Harris and Burns have met several times and share their love of writing. “She’s passionate, creative, and enthusiastic,” says Harris of Burns.

Harris has channeled his own passions into being an active gay rights advocate since the beginning of the AIDS crisis. He has also been involved with Palm Springs Desert AIDS Project for many years.

“It’s a duty, I think. Something I get to do – help bring money and attention to what is necessary,” says Harris.

Utilizing his talents to draw attention to causes, "My Reclamation" is a song Harris co-wrote in 2010 that has become an anthem for marriage equality. “I’m really proud of [that] song,” says Harris, who has been with partner Danny Jacobsen since 1994, and married in 2008.

Harris took some time out of his busy schedule to answer some questions from Palm Springs Life.

What has been your most beloved or challenging Broadway musical role so far and why?

“Broadway is such a great club to belong to. There is nothing like it. I get a thrill every time I walk in a stage door, and not just Broadway. There are several stories in the book about my crazy love and drive for the theatre, going back to when I was a little kid. It saved me. And it gave me a voice and a purpose. I’ve worked off and on in a project about Al Jolson and it’s probably the most fascinating character I’ve done for the stage: complex, dark, enigmatic, manic, joyful, thrilling, and sad. I hope to do it on Broadway one day.

Why is your signature song "Somewhere Over the Rainbow," and has the meaning changed for you throughout the years?

“Well, the song is sacred, so I was nervous about originally singing it on Star Search. Of course, I had no idea that it would become a signature song for me. I’m a lucky guy. It’s a great song to get stuck with! The meaning changes constantly, because it’s so perfectly written. Originally, it was probably more about an almost desperate hope, and then it emerged into belief in that hope, and ultimately, in the fruition of that hope. I love singing it and have sung it thousands of times.”

Do you visit the Palm Springs area often?

“I get to Palm Springs several times a year, usually for a function or performance or benefit. I’ve done the Dessert AIDS Project fundraisers a number of times, [both] as a performer and as a host. It’s a wonderful event and an amazing group of people. It is always an honor to be with likeminded people who are doing something to promote goodness and help for others. It’s really why we’re here. And once in a while, my husband and I, and our son, come down for fun. It’s a great community and so, so beautiful. We’ve talked of getting a place [in Palm Springs].”

What was the inspiration for your Marriage Equality anthem, "My Reclamation"?

“I got a call from Reed Cowan, who was producing a documentary called “8: The Mormon Proposition”.  He asked me to look at a rough edit and perhaps write a song for the movie. I was inspired by what he had created, and ironically, he told me that a passionate video blog I had done after Prop 8 passed had been the inspiration for him to start the movie. Then, the song wasn’t used for the movie because of a commitment to another artist that another producer had made. [The song] took off on its own and served its own purpose. I wrote it with Todd Schroeder and Kevin Fisher. I’m glad it’s in the world and has been used for a number of Equality campaigns.”

What is next for you?

“Now that the book is out, that is my current focus. I’ve created a show (of the same name) that I’ve been touring, which is built on the book. It’s something I call a liter-usical because it’s literary and musical. HAM is not a one-off. It’s the beginning of what I am looking forward to as a writing career in conjunction with all the other stuff I love to do. I am very excited about this new chapter of my life and career (pardon the pun!). I love writing and I love performing and I’m getting to do both. Of course, my primary job is being a good parent to our 5 year old. Thankfully, that life provides a lot of fodder for material!”