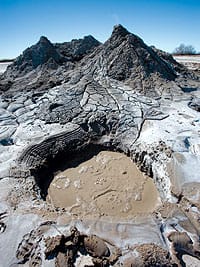 As children, we find the Earth a bounty of discoveries. We study anthills, rocks, and fallen leaves. The older we get, it seems, the more immune we become to the joy of exploration. And then, just when we think we’ve seen it all, we are reminded that wonders still exist.

Elite Tours of Palm Springs inspires such reflection as its Hummer H2s take guests to many of the Salton Sea’s most bewitching curiosities. It is there, along the shores of the immense lake, that we get a peek at the geology and history that make the Salton Sea unlike any other place on Earth.

Along the eastern shoreline, near Bombay Beach, Elite Tours owner Mark Farley leads his group a short distance from the Highway 111 roadway and picks up a rock. It is no ordinary rock, but rather pumice: the hardened residue of volcanic froth. Because the froth was filled with gas, the bubbles “froze” in place, resulting in a rock now filled with air that will float. A specimen 7 inches around weighs a mere 3 ounces. Farley says the pumice scattered on the crusted clay ground was washed there by floodwaters.

According to the San Diego State University Center for Inland Waters, an intrusion of molten magma about 20 miles long, four miles wide, and at least one to two miles thick lies perhaps as close as 4,000 feet from the Earth’s surface along the southeast shore. Temperatures in the Salton Sea Geothermal Field can reach 680 degrees less than a mile below your feet.

While geothermal plants at the south end of the Salton Sea evidence the active metamorphism of rocks below, we get a more intimate look at the process near the Imperial Wildlife Area. Here, the earth has sunken into more-or-less-round pits. As we approach, we hear the bubbling caused by carbon dioxide rising from below the water table through vent points along earthquake faults. Standing on the edge of the pits, we peer down into what could be a series of witches’ brews. But, although the muddy water appears to be boiling, it is ambient temperature. Watching the bubbles is mesmerizing; and listening to the different pitches created by various sized and shaped pots brings to mind a symphony — one the rhythm section, one the strings, and one the brass section.

Odder still are mud volcanoes grouped across an expanse of dried clay about the size of a football field. Where the pots gurgle, the volcanoes burp. Steam rising from the vents tells us there is more heat here; the liquefied mud in one volcano is 128 degrees. The sounds coming from inside the volcanoes allow us to imagine a ticking bomb, water slapping the side of a bucket, or the croak of a 100-pound frog. Ranging from ground level to 8 feet and with vent openings ranging from a half-inch to a foot in diameter, the volcanoes spit mud intermittent heights at intermittent intervals — creating a challenge for any photographer hoping to capture the greatest eruptions. As the mud oozes down the side and dries, the volcano grows thicker. Looking at the site as a whole — with the surrounding crusty-salt surface, plates of cracked clay, and more mud pots — one can without difficulty imagine that they are walking on another planet.

United States Geological Survey scientists estimate volcanic domes at the Salton Sea are 16,000 years old. Farley takes us to Obsidian Butte, one of five rhyolite domes. Scattered along the ground are chunks of shiny, black glass — obsidian — created from molten magma coming in contact with water and cooling before crystals can develop. Iron and magnesium make the glass black, and these specimens appear to be rich in those minerals.

A mere 20 feet away could be another world away. Instead of shiny black glass at our feet, crusty white barnacles crunch with each step. These remnants of the past are considerably younger than the pumice, mud pots, volcanoes, and obsidian. And they were brought here not by Mother Nature, but rather by seaplanes and boats when the San Diego Naval base conducted training at the Salton Sea during World War II.

As we pile back into the Hummer to visit the sea’s bird habitat, our heads are filled with wonder at this surrealistic environment. While scientists, politicians, developers, and surrounding communities debate the future of the Salton Sea, Farley and his clients take pleasure in exploring an environment that can’t be seen from the car window as you drive down Highway 111.

Birds of Many Feathers

White snow geese blanket a field, creating an outdoor room tone of incessant squawking. Suddenly, they lift off in a concerted exercise of flapping wings and fortissimo squawking. The temporary flurry of activity is akin to someone yelling “Fire!” in a crowded theater and then moments later someone else announcing, “False alarm.” The geese re-establish their positions on the ground, though not necessarily in the same spot.

Like the migrating birds, people from all over flock to the Salton Sea in February — peak season there for birdwatchers, says Elite Land Tours owner Mark Farley. In fact, the Annual Salton Sea International Bird Festival has been held for the last nine years in February, when 100 species of birds can be viewed.

On this November day, we are driving to a lookout point in the Sonny Bono Salton Sea National Wildlife Refuge at the southern end of the large mass of water. We have seen hundreds upon hundreds of snow geese in a field of rye grass. Farley says there will be 10 times as many birds there as winter progresses. The thought is staggering.

When the refuge was established in 1930 (it was named after Sonny Bono much later, of course), it included more than 35,000 acres. Most of that acreage subsequently flooded; only about 2,200 manageable acres remain.

U.S. Fish and Wildlife Service officials grow rye grass on about 900 acres to provide habitat for wintering snow geese and to help protect neighboring farmers from crop deprivation by snow geese and other waterfowl. On the balance of the acreage, the wildlife service develops wetlands and freshwater ponds for waterfowl, shore birds, and marsh birds and plants rows of shrubs and trees for upland birds such as quail, sparrows, and warblers.

More than 400 species of birds have been identified at the Salton Sea. On this day, we identify only a tiny selection — a burrowing owl, egrets, cormorants, stilts, and great blue herons — and yet their graceful presence is enough to convince even a non-birdwatcher that there is reason to return before spring.