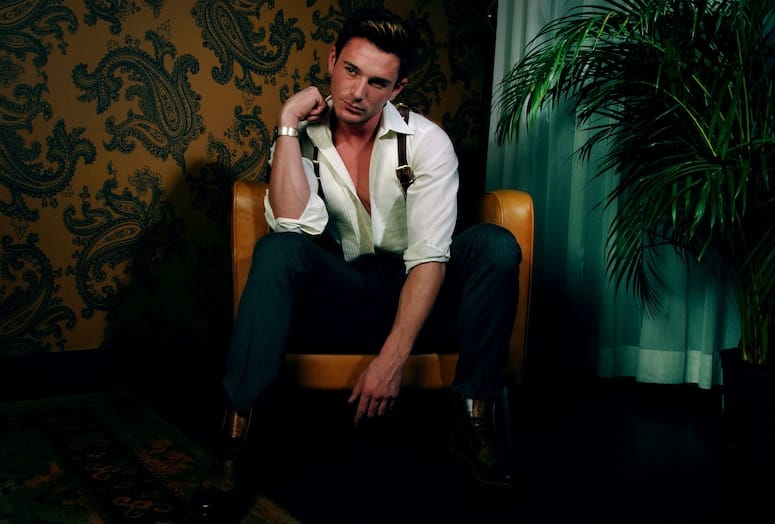 If Sean Paul Lockhart’s private life were a script, it might read like one of the fictitious mystery/thrillers he has appeared in.

At 16, Lockhart moved to Southern California and subsequently became involved in the gay adult film world. His participation as an alleged underage actor in this niche genre came under scrutiny leading to further investigation, national media attention, subsequent lawsuits and Lockhart’s eventual retreat from the business.

For the past four years, Lockhart has focused his talent on LBGT-themed and indie movies.

Directed by Jody Wheeler, The Dark Place explores the strange and “dark” relationships and secrets intertwined in one man’s family.

Lockhart, who says he may attend the screening in Palm Springs, plays the role of Jake and describes his character as “set in his ways on a sick and wayward path that no one can change. A disgruntled monster blundering about, stealing things and hurting people.”

Lockhart adds, “I was drawn to the challenge and change of the role. Really, it was the message of redemption and healing that hooked me.”

About to turn 28 in October, Lockhart has found success as an actor and while he is a man with a past, he unashamedly embraces his future. Palm Springs Life caught up with him recently.

Making the transition from adult performer (as your website indicates) to mainstream, what are the obstacles and what are you doing to overcome them. Why do you think you can he succeed in making this transition?

“I use the word "mainstream" to refer to my work in non-adult films in the sense that it's meant to be consumed by just about anyone in gay society. LGBT films by no means are considered mainstream by most standards. Though, when you come from an even more niche genre like gay adult media, it makes sense.

Back in January I announced my hiatus from adult gay film was coming to an end. I made the choice based on four years of working regularly and exclusively in the LGBT vein of independent film. I've always been at-home and comfortable in this genre, and I'm so at peace working with and making films in the LGBT community. The four-year break from adult film revealed things to me that I would not have seen if I hadn't stepped away for a while. In those four years, I came to understand there were pieces of me missing in my day-to-day life. I missed freedom and the exhibitionism. I like making my own rules.There was also constant consideration on how I might change, mold or present myself in new genres based on my adult background. Everyone I worked with and around had some take on how to approach it, but none of it really considered me as a person. It was confusing, exhausting, and very stunting.

This packaging became such a big deal that I wasn't really sure who I was anymore. I grew to feel like I didn't know where I belonged. Going back to adult film was about standing up and saying: ‘I am who I am, I do what I do, this makes me happy and whole, and I'm not ignoring that anymore’. I'm an exhibitionist. I can now just be ME. Not the "adult star that changed his stripes," but an actor that embraces all roles."

Your website also says you are writing a memoir, which at 27 is unusual. Do you hope to make it a movie? Who do you think would play you? What important message might come from your memoir? "I always find the "who should play you" question to be kind of loaded. My story is so out of bounds that, sure . . . it might be made into a film. The reality is, when and if I get to make a film based on my life experiences; whoever will play me will be an up-and-coming, hopefully out, gay actor. Whomever he is, he'll be comfortable in his own skin, his own identity, and a big part of his talent will derive from just living without any apologies or embarrassments for being one of us. All things I had to learn by walking away from the things that were unique about me.

Though, first I'll have to finish the book. To be quite honest, I put it all on hold when it became too much for me to open up about what all I endured as a 17 year old very much all on his own in the world. It became a choice between finishing a book and keeping myself together. I was falling apart after having finished Truth, pulling life experiences, relationships with men in my past, and memories that were helpful to the character but were damaging to my health. Pandora's Box for my soul, if you will.

My head space after the film was a major indicator that I was not dealing with my past (or had not dealt with it) in a way that it would not come back to haunt me. I turn 28 in October and I'm just now beginning to understand what it all means to me. But it's a crapshoot. Because what it means to me, is something entirely different than what it might mean to you, or the next guy. We all take what we will from our past experiences in a very unique way. What's more important is what we do with it all and how we implement these lessons in life. Use it all to propel forward, not fall back or be stunted. That sentiment, that we are what we make of ourselves (whether it’s success, loneliness, or a veritable mess), is what my memoir is about."

Are you look forward to coming to Palm Springs?

"Yes, I'm a big admirer of the architecture of many of the older, midcentury built neighborhoods. I'm drawn to that low-to-the-ground, sprawling feel. It brings the world in closer to you, making you feel more connected to your surroundings. John Porter Clark and Albert Frey did some really great modern structures there that I appreciate."

For more on Sean: www.TheNewBrentCorrigan.com