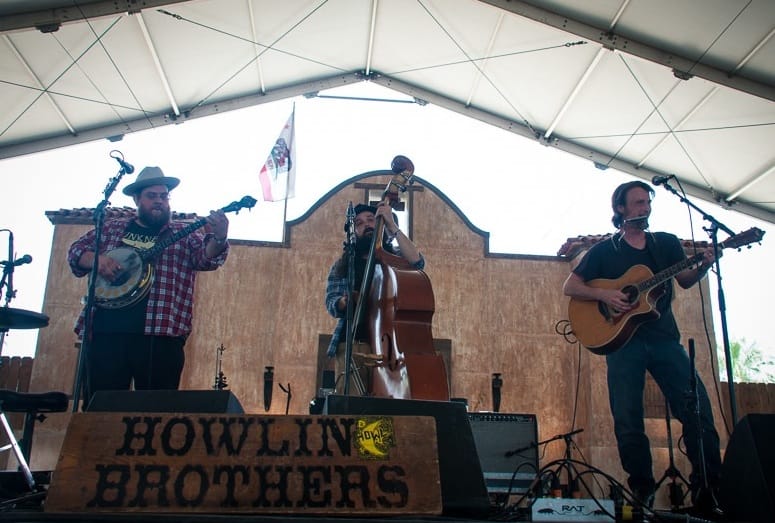 One day at Ithaca College in New York, a guitar teacher named Pablo Cohen heard the faint picking and singing of bluegrass music.

On a quest to find the impressive players, Cohen was surprised to find three of his students at the end of the trail. The Howlin' Brothers were born that day.

These longtime Nashville residents have worked with musical greats like Warren Haynes and Brendan Benson (The Raconteurs). They have recorded two albums with Benson, their previous HOWL and soon-to-be released TROUBLE after appearing at Stagecoach Music Festival in Indio.

Howlin’ Brothers take cues from its musical inspirations The Weary Boys, Old Crow Medicine Show to John Hartford. Green believes these bands are doing “something special” with their singing, songwriting and performing live shows that are “truly great”. How did you get to work with Warren Haynes on your album HOWL?
“HOWL was a big success for us. It was produced by Brendan Benson of The Raconteurs and was our first album we've made that was nationally distributed. While we were in the studio with Brendan, his publisher had arranged for a writing day with him and Warren Haynes. Brendan asked Warren if he would be in to work on one of our songs instead. Warren liked the demo we sent him of 'Big Time' and agreed to record on it. He actually helped us finish the song and shaped it in a gritty and soulful way.  So we have Brendan's publisher to thank for the hook up with getting Warren Haynes on our record.”

How did you meet Brendan Benson?
“Brendan Benson produced HOWL and this time produced and engineered TROUBLE. He's got some skills for sure. Since he moved into his own studio last year, I think he's been doing a lot more engineering…cause he's damn good at it. We met Brendan back in the fall of 2011 at an old-time picking party in Nashville. He loved the music, and I think he just thought our band was interesting and different enough that he wanted to produce a record for us. Now we've done two together.”

Did you record your albums at Jack White’s Third Man Studios?
“We didn't record at Third Man Records, we worked out of Brendan's studio. I don't know what Jack White’s studio is like, it's probably pretty cool. Maybe, if offered, we could do a single or something there?”

What did you learn working with Brendan Benson?
“Working with Brendan is always awesome. He's a great guy! He's passionate about recording songs and making something new or different. These 13 songs on TROUBLE were brand new so, yes, [Benson] helped us shape them. [He helped] make the arrangements as well as [suggesting] we get experimental with some instruments we used.”

When is your next album coming out?
“The new album TROUBLE comes out May 13. It's a gumbo of the music we love…country, old-time, Cajun, blues. It is different than HOWL in a few ways. There are a few more tracks with electric guitars, drums, and piano, but the overall effect is cohesive. The songs were all written in 2013, and carry a similar message of trouble, travel, and love gone good, and love gone wrong.”