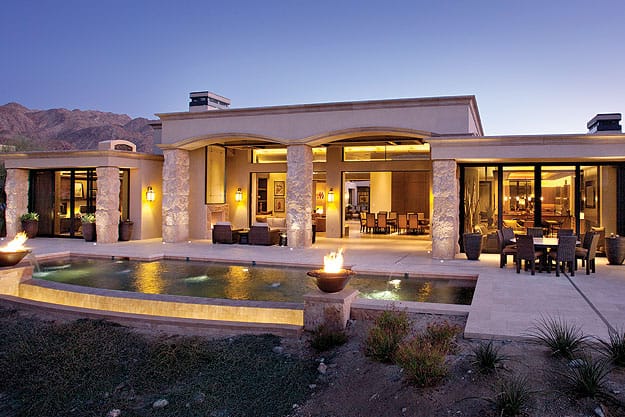 Painters would be the first to tell you that the natural light in Palm Springs, Seattle, and Paris differs drastically. But a lighting designer says his work in those three locales remains the same.

“I try to emulate what is naturally occurring,” says Christopher Thompson, CEO of Studio Lux. Although his company has its headquarters in Seattle and a satellite office in London, Thompson comes to the desert every two weeks. “I use this as my hub for work in the Southwest,” he says. Since buying a house at Mission Hills in Rancho Mirage four years ago, he has completed projects at The Reserve in Indian Wells and at The Hideaway and Madison Club in La Quinta.

Among outlying jobs, Studio Lux recently won the lighting contract for a major renovation and energy-saving retrofit of Frank Lloyd Wright’s Taliesen West in Scottsdale, Ariz. “It’s a four-hour drive from Palm Springs. It gives me time to think,” says Thompson, noting that it is a three-year project. “I do all my creative work driving in the car.”

Since lighting glass artist Dale Chihuly’s largest permanent installation — the 43-foot Fireworks of Glass tower at the Children’s Museum of Indianapolis in 2006, Thompson has worked closely with Chihuly (also a Seattle resident), illuminating residential and commercial installations. He created the lighting for Chihuly’s Gardens of Glass at the Royal Botanic Gardens, Kew in England and this winter completed lighting the artist’s renovated Boathouse studio on the banks of Lake Union.

While pursuing a degree in fine arts at Cornish College of the Arts in Seattle, Thompson found his calling. “I discovered theatrical lighting,” he says. “I was really intrigued by how the lighting changed people’s perception of what was going on onstage.” He worked as a lighting designer for an opera company and then decided to pursue a degree in electrical engineering “so it wasn’t just arm waving,” he says. “I had to understand the calculus behind successful design.”

Thompson’s first three jobs after acquiring his second five-year degree are noteworthy for the prominence of the clients: Jack Benaroya, the Nordstrom family, and George Russell. He now is working on a third degree: a master’s in sustainable design through the San Francisco Institute of Architecture. “That’s just to keep up with the changes in lighting [technology and building codes],” he says, referencing a prediction that more changes in lighting will occur in the next three years than have in the last 30.

At a Mercedes-Benz showroom in Bellevue, Wash., Studio Lux satisfied the desires of the dealership to make its luxury automobiles shine and the constrictions of city officials concerned with energy use. With 80 percent LED lighting, the project uses 30 percent less than the allotted watts per square foot.

According to Thompson, residential lighting represents 14 percent of U.S. electricity consumption and new lighting technology and energy savings are “inching their way into the residential market.” For example, he notes, remote control lighting that has been embraced in “iconic” houses is finding its way into standard houses, and Apple has introduced apps that allow smart phone users to “talk to” their homes.

But Thompson still sees the romance he first saw in the theater.

“We lean on artificial lighting more to help with bringing about the required light levels not just from a technical standpoint, not just for doing tasks, but also for how the light affects and reflects.”

Christopher Thompson dissects every room he lights into three classifications: accent lighting, task lighting, and ambient lighting. “The biggest mistake people making in lighting their homes is they try to get one fixture to do all of that,” he says.