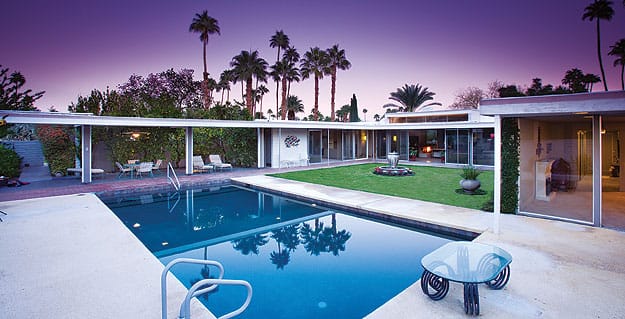 For years, Jim West and his wife, Karen Prinzmetal, strolled by the midcentury modern home on Fiddleneck Lane in Palm Desert and pondered its origins. It was certainly in fine company with an Albert Frey around the corner, a few Walter Whites nearby, and the historic Firestone estate in the vicinity. But the Fiddleneck residence always provoked the same question: “Was that house designed by William?”

That’s William Krisel, the architect revered as one of the midcentury pioneers who built careers — and a good part of the desert — on the ideals of modernism. That Krisel happened to be the couple’s colleague and friend is a curious twist of fate, and their actions uncovered one of south Palm Desert’s most precious hidden treasures: “The Lost Krisel.”

“That particular home had interesting elements that looked familiar to us,” West says. “It was just wonderful architecture; but it was buried, hidden underneath a lot of plants.”

Unable to contain their curiosity, the couple reached out to Krisel in fall 2008. Coincidentally, the architect had recently begun a soul-searching perusal of some of his old designs. When West and Prinzmetal described the house to him, it triggered memories. “I immediately went through my archives, discovered all the drawings for a residence I had custom-designed in the early ’60s, and e-mailed them back,” says Krisel, now 87 and living in Brentwood. “They went to the house, rang the doorbell, gave a copy of the drawings to the owner …  and they matched in almost every way.

“I was thrilled to have found my ‘lost’ house.”

Imagine suddenly realizing that you’ve “uncovered” a bona fide Krisel. The architect custom-designed only 40 houses in his extraordinary career. Still, despite their excitement, West and Prinzmetal made no attempt to intrude on the homeowner.

In May 2011, the property was placed on the market, and real estate agent Russell Reserva entered the picture.

“When I met with the owner, she said, ‘I think this house was designed by a man named Krisel,’” Reserva says. “And I said, ‘What?’  She told me she had copies of Krisel’s drawings ‘somewhere’; and when she found them, I went, ‘Oh my …’”

He trails off, still befuddled by a situation akin to discovering an old painting that now happens to be priceless. Out of curiosity, he called Krisel. “As soon as I said ‘Fiddleneck,’ William went into a complete history of house,” Reserva says.

The late 1950s and early ’60s were triumphant for Krisel. He and partner Dan Palmer were prolific designers, popular for their sleek midcentury modern sensibilities and the affordability of their houses.

Alexander Construction Co. played a prominent role in Krisel’s career. His iconic butterfly-shaped roofs in the venerable Alexander Tract still command attention. In the early 1960s, builder William Kemp and his partner bought out the interest of Krisel’s clients in Palm Desert’s Sandpiper condominiums, though Krisel continued designing residences there. When Kemp, then a resident of La Jolla, approached him to design a house for his own family in 1963, Krisel accepted.

“This was the first and only time where I had a client that was so loose, you might say, he just gave me the requirements and said, ‘Go to work and draw it,’” Krisel recalls. Kemp eventually had his superintendent build the house on Fiddleneck. “I never got any phone calls, never got any questions during construction like you usually do; and that’s understandable, because Kemp knew all the details. I lost track of it, got busy with other things, and never wondered, ‘Whatever happened with the Kemp house?’”

Nearly five decades and seven owners later, about 90 percent of the 3,500-square-foot house remains true to its original design. The main rooms in the three-bedroom, three-bathroom dwelling all open to an outdoor space — and each has striking desert views. The most significant alteration was in the master bath. The original space sported an atrium, but one owner opened the area so it could be included within the larger bathroom, complete with a Jacuzzi. Other changes included built-in bookshelves in the den and new lattice on the patio at the side of the house.

The 10-foot-tall living room still boasts the spaciousness that Krisel envisioned. “The height of the room should be in scale with the width of the room,” he says. “All of the rooms have high windows. You can see the mountain ranges and the tops of trees and the sky. I like to bring the outdoors in, not only at eye level, but at sky level.”

The current owner hails from the East Coast and has lived in the home since 1998. There were no telltale signs to indicate she was living in a one-of-a-kind Krisel design. A previous owner had planted bougainvillea and other tall shrubs, which grew around the house, shrouding the striking architectural elements. In an effort to breathe new life into the old gem, Krisel and Reserva suggested changes, including the trimming and removal of overgrown landscaping.

News of “The Lost Krisel” piqued the interest of Ron Marshall, Palm Springs Preservation Foundation president.  “Determining that a private residence or commercial building has architectural provenance is only the first step toward preservation,” he says. “Concerned owners often want to ensure that future owners continue to be good stewards. Every house recognized as contributing to the historic stock of the region lends credence to our claim that we are ground zero for great modernist architecture.”

Krisel has yet to step inside, although he has driven by the house several times.

“I must tell you, in all my 70 years as an architect, this was a unique situation,” he says. “You kind of think about it over the years and — boom! —it happens: Someone says, ‘I saw your home!’ And then you discover it … and that it’s doing well.

“It’s like finding one of your children that got lost!”