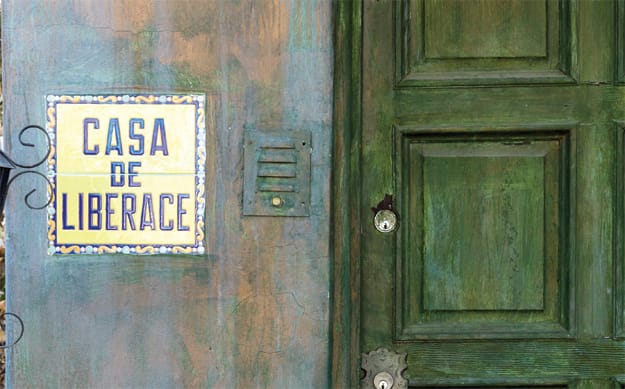 Fascination with celebrity never dies. The desire to connect to Hollywood — the excitement, the razzle-dazzle — remains as strong today as it was in the ’50s. And Palm Springs will always be part of that Tinseltown allure. Locals and visitors still marvel at many celebrities’ houses, some for their architectural prowess, others for their curious history. That’s why we hit the road to learn more about them. Think of this as a do-it-yourself celebrity home tour. The houses we visited are easily accessible and beyond architectural mystique. The road trip steers you into some of the most divine neighborhoods in the Coachella Valley, each revealing a fabulous slice of history and many offering some of the most unforgettable views to boot. Buckle up!

Bus tours are hit and miss, so it’s refreshing to come across a creative beast like Celebrity Tours of Palm Springs. Like the city itself, this local enterprise has plenty of style — and much of that comes from the tour guides.

Tim Bannister, the relatively new owner of the company, which has prospered here for more than 40 years, says he “likes to try to paint a picture of the valley and show people how celebrities impacted Palm Springs.” And that he does. Bannister and his guides sweeten these outings with stellar bon mots and an authentic desire to share a wealth of the valley’s celebrity history. A recent excursion proved enlightening for a number of reasons. Beyond offering detailed accounts of what life may have been like for some of the stars who lived here — and some who still do — Bannister reveals a wealth of knowledge about architecture.

Running 90 minutes to two hours, the tour offers a fine glimpse of some lavish houses, as well as a feel for some of the desert’s distinctly original neighborhoods, especially around Las Palmas. Take a seat.