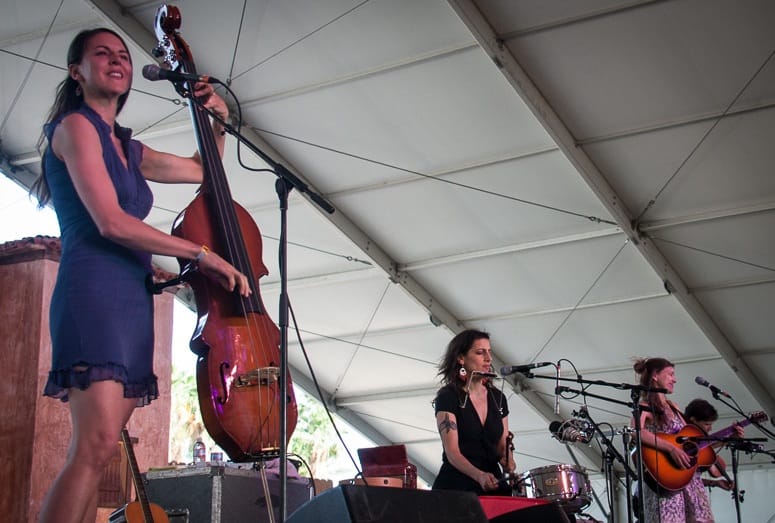 Twelve years ago, Ruth Moody and Nicky Mehta met in a Winnipeg music shop. The two ladies played with another musician in a local show, and out of that performance The Wailin’ Jennys were born.

Seven years later, Moody and Mehta met American musician Heather Massey through a mutual friend, and the trio have been together ever since.

They have received two Junos (the Canadian version of a Grammy) and star on A Prairie Home Companion with Garrison Keillor regularly. The show has allowed them to work along side some of their musical heroes like Bonnie Raitt and Sheryl Crow.

This summer, they will again perform on A Prairie Home Companion. July’s marks the 40th anniversary of the long running public radio show.

Playing fan favorites off their last album Bright Morning Stars, the Wailin’ Jenny’s recently rousted up the music fans at Stagecoach Music Festival in Indio. They are currently working on material for a new album, but no release date has been set.

Palm Springs Life caught up to The Wailin’ Jennys at Stagecoach.

Who have you watched that you enjoyed?
Ruth Moody (pictured at left): "Nicki Bluhm and The Gramblers, and Sarah Jaroz were great."
Nicky Mehta: "I wanted to see Shelby Lynn, it always happens we play opposite of who I would like to see.  I would love to see Crystal Gayle and Loretta Lynn." Oh, but Loretta Lynn isn’t playing.
Ruth Moody: "She’s not?"
Nicky Mehta: "That’s right, Loretta was on the original line up then wasn’t."

Do you find you have a larger Canadian following or American?
Ruth Moody: "We’ve been on A Prairie Home Companion (on public radio) and have a pretty strong following in the states. We’ve spent more time in the states, especially this last year."

Who have you performed with either as a band or solo?
Ruth Moody: Bonnie Raitt, Meryl Streep, Bruce Coburn-
Heather Massey: Ruth’s band played with Mark Knopfler (of Dire Straits).

How did that opportunity come about?
Ruth Moody: "He got in touch with me to sing on his record and so, we just kept in touch and he played and sang on my record."

That must be strange to have Mark Knopfler call you up out of the blue?
Ruth Moody: "It was very strange. I thought my fiddle player was playing a joke on me."

Any favorite moments on playing Prairie Home Companion?
Nicky Mehta: "Yes, playing with Bonnie Raitt. She’s amazing. My Mum was thrilled, too. She was amazing, her band was amazing. We remained friends with them. They are such incredible people.  Her guitarist was in The Range of Bruce Hornsby and The Range, her drummer played with Crowded House, so it’s just the full experience, was just amazing. Singing with Bruce Coburn, who is such a Canadian icon, it was just incredible. Heather has been on the show a ton as Garrison’s [Keillor] duet partner."
Heather Massey: "I’ve sung with Sheryl Crow, Shawn Colvin and Emmylou [Harris]. K.D. Lang was on the show once, but I didn’t get to sing with her. That would have been amazing. One of the best “Jenny” [show] was at the Winnipeg Folk Festival. We sang a set and Emmylou Harris was right after us, so she was standing backstage and peeking out watching us the entire set.  I was so freaked out."
Ruth Moody: "Oh yeah. My friend gave us a photo of us performing and Emmy Lou’s head is peeking out watching."

Is she a huge musical influence?
All: "Oh yes."

Anyone you haven’t worked with that you would like to?
Nicky Mehta: "Peter Gabriel."
Heather Massey: "Bill Frisell.  He’s an amazing jazz guitar player. I would like to make a record with him."
Ruth Moody: "Gregory Alan Iskov. He’s not super well known yet, maybe I’ll work up the courage, or we’ll cross paths or something."