Tim Bruneau: The Message is In the Music 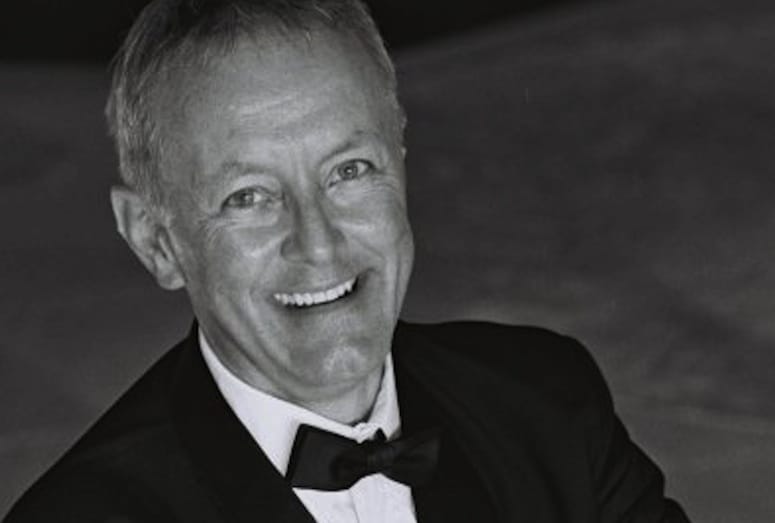 One day, the animal freed himself from his collar only to jump back over the lobby gate to climb into Bruneau’s arms.

Bruneau, ever the charmer, turned to the woman behind him and said wittingly, “I’m sorry, he’s a little theatrical”.

The woman promptly responded, “I know where he gets it from. I’ve seen you conduct!”

But Bruneau does more than just conduct…

• He’s sung under the baton of such legendary conductors as: Leonard Bernstein, Seiji Ozawa, Paul Salamunovich

• He loves Italian food of any sor

• He loves the “Big Bang Theory”

And he embraces it all with grace, humor and heart…not easily picking a favorite focus or genre.

“I am a process-oriented artist and I love rehearsing, exploring, the digging for the deepest kind of expression in something,” Bruneau says. “I love all things musical, teaching, singing, performing. I could never work in a field that is not musical; it’s my life-source.” Bruneau will be honored for his contributions to music in the Coachella Valley, along with Joe Giarrusso of Coachella Valley Repertory Theater, and Lilli Joseph of Opera Showcase (both pictured right).

“For the Children”, a collaborative fundraiser for OperaArts and the Steinway Society of Riverside County Dec. 8 at the Classic Club in Palm Desert, will celebrate the three honorees with a sit-down dinner, silent auction, special presentations and piano and vocal concerts including an appearance by:

Arlene Rosenthal, president and founder of OperaArts, says Bruneau’s impact on the valley has been vast.

“He makes sure people are exposed to music and he does it with a big heart,” she says. “He has a generous spirit, he respects people, and he has wonderful values. He gives a lot to keep good music alive here in the valley and he does it with meaning and heart.”

When he was 5 years old, Bruneau says he excitedly accepted an invitation to join television personality Lorne Greene (of Bonanza fame) at the local church where Greene had been asked to sing his hit song, “Must be Santa”.

Bruneau, in character as a little elf, accompanied Greene and says, “At the end of the performance, I discovered I just loved the stage and the applause. But I was also blessed with a sister with a beautiful, rich alto voice and in middle school, I played the piano and the two of us covered The Carpenters.”

As his passion and experience grew, Bruneau was given the privilege, among others, to sing with American soprano legend Leontyne Price

“During a rehearsal break,” he says, “I saw a Steinway and knew that I would never have the opportunity to play something like this on a grand stage, so I sat down and played. I played from my heart and then I felt a hand on my shoulder. Ms. Price was standing beside me, watching and listening. It was a huge compliment.”

“Who Are You and Where Have You Been?’

After 18 years building a successful music program as director of music at the prestigious Marlborough School in Los Angeles, Bruneau’s longtime partner, John Kempel, was ready for retirement and Bruneau was ready for a new challenge. He and Kempel made their desert weekend home a permanent residence, and Bruneau even thought he might take the year off.

Plans changed quickly when he was “rediscovered”, singing hymns at St. Paul of the Desert in downtown Palm Springs.

“A gentleman turned around and said, ‘Who are you and where have you been?’ “ Bruneau says.

After a chat and a bit of reluctance having never performed live in a restaurant, Bruneau accepted a position at the Uptown Grill of Palm Springs where he entertained audiences for three years. As he gained more notoriety, a patron heard Bruneau sing and told him that the California Desert Chorale needed a new artistic director.

“There are so many great things about this organization,” Bruneau says. “It’s the purest and truest sense of community ensemble with members ranging in age from 18 to 82. It’s a very wonderful group of people.”

Now in its seventh season under Bruneau’s leadership, the California Desert Chorale has grown to 72 members with strict audition requirements that limits the number of singers added each year to 4 or 5

Bruneau has also been instrumental in establishing an internship for the COD Choir students at the California Desert Chorale. This scholarship opportunity allows for student expenses, dues, and even music to be paid for while giving them the opportunity to sing with a large choir.

“Young people learn from experienced singers, many of which are professionals and in turn, the young talent energizes and inspires the more seasoned performers,” Bruneau says.