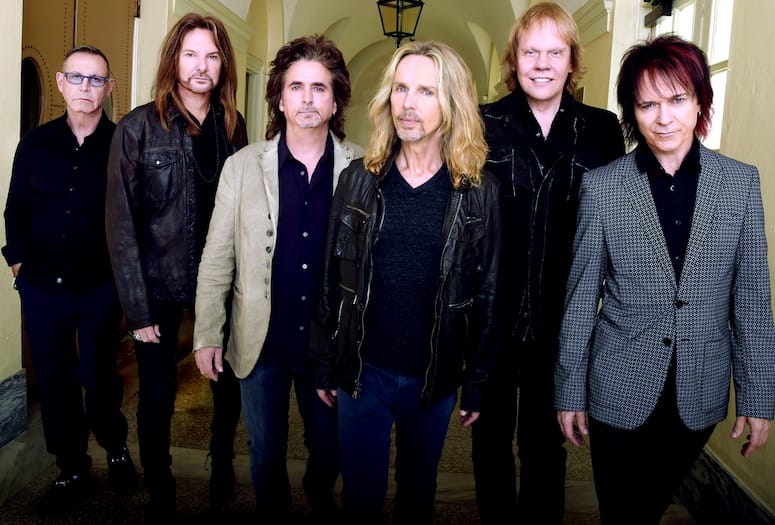 Palm Springs once drew Styx's Tommy Shaw in like a magnet.

“It’s a hypnotic, mesmerizing place — so different from where I grew up,” says Shaw about Palm Springs. “I was born and raised in Montgomery, Ala., with no mountains of any significance near where I lived. The air had lots of humidity, and no palm trees. So it was a special thing for me to go out to this beautiful place in the desert, surrounded by mountains that changed color, and experience the different picture I would get standing outside as I looked 360 degrees at these beautiful mountains all day long. I loved the way the sun moved, and how the shadows were different every time I would look at them. That’s how I remember Palm Springs. I had so many nice times out there, and met so many nice people.”

The desert still calls out to Shaw, who with Styx will perform Jan. 24 at The Show at Agua Caliente Casino Resort Spa in Rancho Mirage.

Shaw, the singer/songwriter/guitarist behind such perennial Styx hits as Renegade, Blue Collar Man, Crystal Ball, and Too Much Time on My Hands, recently spoke to Palm Springs Life about his many personal experiences in the Coachella Valley over the years. Tommy Shaw: "Life happens, and you have to keep rolling with it.”

Styx has always connected with audiences in a big way, becoming the first band ever to rack up four consecutive multi-platinum-selling albums: The Grand Illusion (1977), Pieces of Eight (1978), Cornerstone (1979), and Paradise Theater (1981). In the wake of all that early success, some Styx band members were looking for a way to escape the big city and music business pressures, and Palm Springs happened to fit that bill.

“In the early 1980s, [late founding Styx drummer] John Panozzo and I both took our business manager’s advice and traveled out to Coachella Valley from Los Angeles to see the Palm Springs area,” Shaw recalls. “Palm Desert was just being developed, and he and I both bought condos on each side of a golf course there. It became this oasis for us — a way to get away from things. We all lived in the Midwest at the time, and whenever we would come to Los Angeles and drive out in the car, it was just like they say: a million miles away on a half tank of gas. It was so great to escape the madness of Los Angeles or wherever else we were coming from.”

Shaw fondly recalls getting to know Bobby Riccio and the Riccio family, who run Riccio’s Steak and Seafood Restaurant on North Palm Canyon Drive in Palm Springs. “The Riccio family became like an extended family for me,” admits Shaw. “And Frank Sinatra was good friends with Bobby’s Uncle Tony. There was a gold Frank Sinatra album on the wall, and I wound up putting a platinum Styx album on the wall there myself. I was like, ‘All right, Mr. Sinatra, check this out!’ “Back then, Riccio’s was also a place where it was not unusual to run into Harry Caray, Robert Evans, famous authors, actors, and athletes,” Shaw continues. “And pretty much everyone who worked there was a Riccio family member. You would occasionally find me in the kitchen taking a cooking lesson from Bobby's brother Danny. ‘You want Fettuccini Alfredo? Come on, I'll let you make it!’ Otherwise, there was no ordering food; they just brought you a feast you could not believe. My favorite restaurant ever.”

“Bobby passed away a few weeks after attending my 50th birthday party in Hollywood. I believe I have a photo of him singing happy birthday to me standing next to friends from all facets of my life. He had a heart attack at age 47, on his way to Las Vegas to check on his linen business operation."

"He was my dear friend and my connection to the desert community, and he was one of a handful of people invited to Jeanne’s and my wedding," Shaw adds. "Losing him caused me to stay away from Palm Springs for years. That Palm Springs chapter ended and remains glorious in my memories. It took a few times going back, but we’ve started a new chapter there. Life happens, and you have to keep rolling with it.”