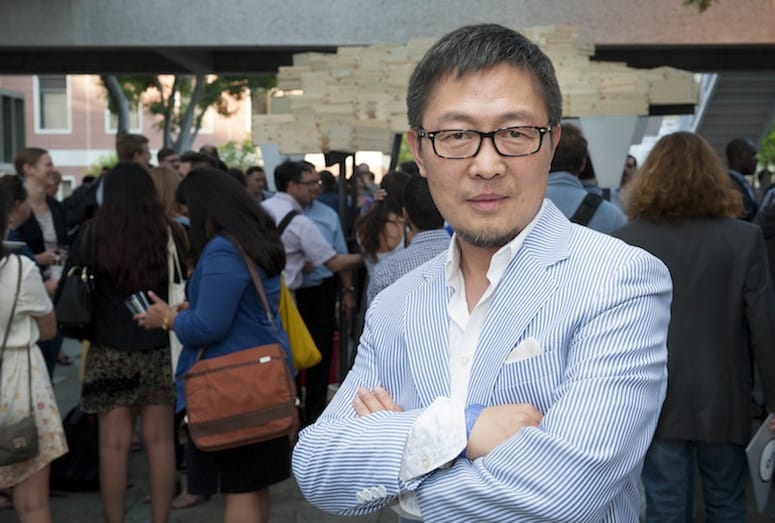 During the 2008 Summer Olympics in China, a world-wide audience was treated to the unveiling of Beijing National Stadium, also known as the “Bird’s Nest.”

Designed by Swiss architects Jacques Herzog and Pierre de Meuron, the "Bird’s Nest" will be part of a series of images to be shown by Qingyun Ma, Dean of USC School of Architecture, during his Jan. 31 presentation titled A Practice Conditioned by Chinese Urbanism at the Annenberg Theater in Palm Springs.

The lecture is the first of a series by the Palm Springs Art Museum's Architecture and Design Council. Architects Jacques Herzog (left) and Pierre de Meuron stand in front of the Beijing National Stadium known as the "Birds Nest" built for the 2008 Summer Olympics in China.

“Dean Ma’s presentation will focus on the growth of urbanism and how new architecture practices need to be instituted,” said Sidney Williams, curator of the museum for architecture and design. “As one of the most influential architects in the academic environment, Dean Ma’s experience and involvement on an international level will bring our audience a singularly insightful perspective on the subject of Chinese urbanism.”

Ma, who has designed buildings in China, offers a great understanding of the contemporary issues surrounding urbanization. At USC, Ma has launched a number of global initiatives, including the USC American Academy in China, a base for visiting scholars to facilitate their research and foster academic exchange.

As the most populous country on the planet, China’s robust urbanization has a particularly critical impact on the culture.

“My agenda is to open the discussion of the global architecture ideal, which does not have a culturally specific tradition, and how it relates to local culture,” says Ma.

Ma is interested in the role of global architects when they design projects in another country where the local culture has a specific tradition. “Although architecture holds a universal value, it is what is shared that is the social agenda of architecture,” adds Williams.