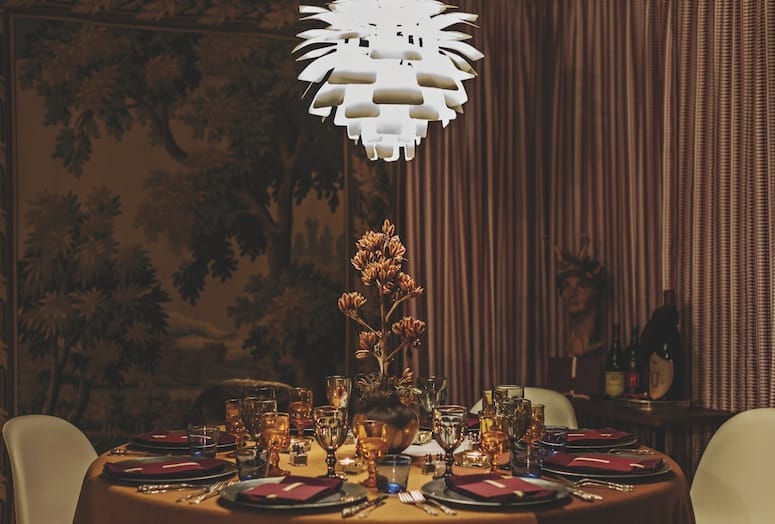 It was a solemn moment. The revelers at the ancient feast of Umlauschen took their places at the banquet table for the annual crowning of the margrave. Whoever received the crown would rule over the lands and bestow beneficence or dispense justice as his or her power and wisdom dictated.

Kurt Cyr, master of ceremonies, rose for the invocation. Dressed in a traditional collarless loden coat and projecting the dignity of his office, he addressed the eager throng.

“Welcome to Umlauschen, the traditional feast of field and forest. Legend tells on the first Umlauschen there was a feast of thanksgiving, and the elderly margrave heard there were Turks afoot. He thought he would outwit them, so he declared an unwitting young man to be king of the feast … and tried to escape.” • See related story: Recipes to Create Your Own Umlauschen

“Have you seen the auto-tuning of the first [presidential] debate?” interrupted Sir Bob, the outgoing margrave. “It’s from that group that does bad lip reading.”

“They’ll have four NFL [commentators] talking and they’ll put a track over it, like one says, ‘I don’t like cheese,’ and [the other says] ‘You should eat more cheese.’”

The offended master of ceremonies silenced the tipsy feasters with a stony glance.  All knew that the nearby royal kitchen housed a vast cutting board and many sharp, deadly instruments.

“The Turks arrived and this young man fought valiantly and saved the castle,” Cyr continued. “When the old margrave died heirless, his wife adopted this young man who became the new margrave of Umlach. This ritual

now continues with the celebration of Umlauschen by crowning the new king of the feast.”

Kurt of Cyr held up the sacred proclaimation. “Here lies the name of the unwitting guest who may be margrave or margravine of Umlach!”

Everyone cheered. They lauded Umlauschen as an equal opportunity employer.

Cyr calmed the throng and read from the semi-ancient parchment. “Let it be known throughout the land that on this first day of November in the season of celebration that the crown of Umlach has been bestowed upon the esteemed

head of Sir Daniel of Heller!”

Sir Daniel, an artist engaged to Lady Tracy, was genuinely surprised at his election. He accepted the applause of the crowd with equanimity, promised to discharge his duties faithfully, and fell to admiring his new crown in the mirror app of his

Sir Bob grew philosophical. “You can see how people change when power is bestowed on them.”

The master of ceremonies agreed. “Every crowned head of Umlach has emailed us photos the next morning … eating breakfast with the crown on.”

You won’t find Umlauschen in any medieval chronicles of Mitteleuropa or in footnotes of contemporary historians of cultural arcana east of the Oder River. Google or Yahoo can’t help, although it might be only a matter of time

before some clueless Wikipedia contributor buys it whole hog.

“We thought of it one year when we realized how difficult it was to get people over for a holiday meal,” says Cyr in the kitchen he shares with his partner, Jay Zaltzman’s, in their jewel of a midcentury Deepwell home. “I

love food and celebration rituals. What better way than to combine them both? When we couldn’t get friends to Thanksgiving or Christmas because of family commitments, we thought, ‘Let’s celebrate a holiday people are

unfamiliar with and make it our own.’ A feast of thanksgiving seemed wholly appropriate.” The table is set for the feast. The sacred award document. The convivial gentry gather before the crowning.

While no actual snow fell to block the passes and stop the barbarians from invading, Cyr consented to hold a dry run Umlauschen (sort of a fake fake holiday) and was able to gather a convivial crowd that included the aforementioned Sir Bob,

Lady Tracy, Sir Danny as well as, Princess Leilani of Garfield in the Movie Colony Lands, Princess of Cathedral City, Dido Von Kalkreuth, and her consort, Dadaist to the Stars, Raoul Hausmann.

Cyr, a designer by trade and a man of infinite talents from architectural guide to textile designer to chef to creator of the monthly cultural gathering, Salon of the Parched (whose members are known as Parchies) does nothing by halves. When he and Zaltzman first came to the desert they decided the best way to gather all the interesting people they wanted to meet was by conducting salons based on an 18th century model. Attendees would gather to discuss an interesting topic of the day.

Salon of the Parched began with eight people; the group now numbers more than 500 members. For his new friendsgiving holiday, the Montana native constructed a long and convoluted narrative around the history of the Umlauschen feast that goes well beyond a mock ceremony and a silly crown. The crown rests upon an image of one of the ancient heads of state. Master of Cermonies Kurt of Cyr proclaims Sir Daniel as the new margrave. The revelers toast a long, healthful, and prosperous rule to Daniel.

Several days before the feast, Cyr was busy in the kitchen pre-preparing as much of the meal as possible. Occasionally, Zaltzman, who runs BureauWest Marketing and Research from home, wandered in to offer encouragement and to see if

he was needed to contribute his own specialty, spaetzle. “We decided we wanted this meal to occur sometime during the holidays so in the history of Umlauschen I said that the feast time came directly after the first snow of the year because

that was when the mountain passes would be closed and the barbarians couldn’t swoop in and destroy the villages. So the people feasted because they knew they would be safe until the spring. One can almost hear the sound of the

satisfied smacking of lips when saying it.”

For the feast this year, Cyr planned a menu that included a Marauder cocktail made with his own bespoke gin, his special warm nuts, a faux gras brulee, meadow greens salad with salt pork lardons and mushrooms chips, elk ragu, spaetzle

with forest mushrooms, hot squash and onion salad, and a rosemary date apple pie pudding with buttermilk frosting. The meal was served with a magnum of red wine for which Cyr created an ornate Umlauschen label. Cyr pouring out one of his famously potent Marauders. The Umlauschen Inventor combs the high desert for fresh junipers for his herb-laden bespoke gin.

For his new friendsgiving holiday, the Montana native constructed a long and convoluted narrative around the history of the Umlauschen feast that goes well beyond a mock ceremony and a silly crown.

For the Umlauschen dinner, Cyr’s goal was to create as many connections to the fake legend as possible with tastes that were rustic, but  somehow refined. For instance, several years ago, when real estate in the valley took a

nose dive, he and Zaltzman decided to take a break and head back to his hometown of Missoula. They took over a bed and breakfast in a famous, old schoolhouse, and Cyr astounded his guests with scrumptious breakfasts. Once, he was briefly

stumped when a guest asked if elk could be one of the breakfast meats. Cyr went to his nephew, an avid local hunter, and soon had a steady supply of ground elk meat for his guests. For the Umlauschen meal, he prepares it like a traditional

Bolognese ragù with milk, broth, and tomato puree. While making the other entrées over the course of the afternoon, he returns again and again to add broth. The finished ragù is extraordinary — rich, unctuous, and pleasingly gamey.

Almost every menu item is a Cyr creation — the faux gras brulee made with chicken livers is a clever update. “The apple pie pudding was something we always had in my family,” he says. “I added dates and I think

the rosemary gives it some really interesting herbal notes. I made it once for my mom and she said, ‘Honey, you have to give me the recipe. And I said, ‘Mom, that is your recipe.’”

When Cyr first hosted Umlauschen, he was overwhelmed by the arrival of 19 would-be feasters. Talk about your invading hordes of hungry Visigoths! These days he tries to keep the guest list closer to the number his dinner table will

comfortably seat. Certain modern social niceties have been introduced, such as no tearing joints of meat with one’s bare hands, and instead of drawing sabers, antagonists are encouraged to settle disputes in the kidney-shaped swimming pool with nerf bats.

Nevertheless, the feasting was raucous after the elk was ravenously consumed and more Umlach wine was drunk. Conversation revolved around barbarians threatening the kingdom (the debates), crops (the botanical Cyr sources in the Yucca Valley for this gin) and the drought (Sir Bob was lauded for decreasing the fountains around his castle from 13 to six).

Sated beyond measure, the guests gave a final toast to the master of ceremonies and his co-host, and rose unwillingly from the feasting table.

Sir Bob, now margrave emeritus, was asked if he had any final words of wisdom for Sir Daniel, the new margrave.“I figured out that I should bribe the [then] margravine to influence my favor. So, I gave her a big bag of lemons from our trees and then shortly after I was crowned margrave.”

“When life hands you lemons, use them as a bribe.”

And with that the happy Umlauschers drifted away in the night toward their own domains.