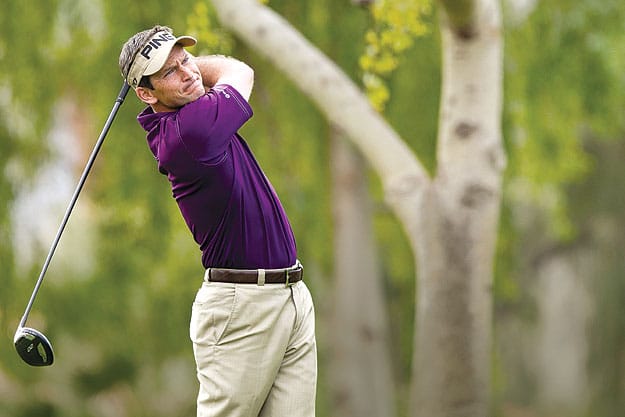 After being played across more than five decades as various incarnations of “The Hope,” the mouthful moniker of the inaugural “Humana Challenge in partnership with the Clinton Foundation” proved easily digested by locals and the golf world alike. Beating out contestants that included the NBA Finals and Super Bowl XLVI, the Humana Challenge was recognized as the Sports Event of the Year by SportsBusiness Journal and SportsBusiness Daily.

In the first season of a monster, eight-year commitment with the historic tournament, Louisville, Ky.-based healthcare giant Humana brought with it a refreshed playing format, ubiquitous message of national wellness, and the ever-present face (and handshake) of the 42nd president.

Those 84 million steps came via more than 12,000 pedometers distributed by the new title sponsor at the Bob Hope Square event headquarters. The stepping stats helped evidence the reach of Humana’s message, an expression noted nationally with Bill Clinton’s Health Matters Conference held at Renaissance Esmeralda Resort & Spa in Indian Wells in the days preceding the tournament.

All those steps forward were a mere pitching wedge away from being a stumble in reverse. Prior to Humana and Clinton’s involvement, the golf tournament had operated in 2010 and 2011 without a title sponsor.

“Realistically, at that point in time, we could have gone through last year,” says John Foster, president and chairman of the board of Desert Classic Charities, the tournament’s philanthropic arm. “But that would have been the last one, unless we could have been able to get a sponsor.”

Foster, who has been involved with the event for more than a quarter-century, is candid about the potential purview for total desertion of PGA golf in the desert.

“We had been sponsoring ourselves through reserves we had built up through the years,” he says. “So there’s a point where you run out if you can’t get a sponsor. And the economic conditions that were in place were not conducive to tournament sponsorship. The ones who were in it were not interested in getting any more events, and some were wanting out. Chrysler went bankrupt, so they were in no shape to continue. So it was a pretty bleak future without Humana stepping up.”

Skeptics of removing Hope’s moniker from the event were assuaged by ample homages to the legendary comedian (along with the support and backing of Hope’s family). Moreover, the nostalgic will note that while West Coast pro golf events were once dominated in title by the legends and legacies upon which they were founded, the inclusion of corporate sponsorship has become necessary for an event’s survival on the PGA Tour. After Shriners Hospital announced the ensuing removal of Justin Timberlake’s name from their Fall Series tournament this past autumn, almost no PGA events were attached to a celebrity name (exceptions being the Arnold Palmer Invitational and HP Byron Nelson Championship).

“There was a fear [of the event’s potential demise],” says Jerry Eye, senior director of golf at PGA West in La Quinta. “The tournament needed a major sponsor and an opportunity to revive itself, and it needed a change. The Humana definitely did that, but I would say that former President Clinton and his foundation took the event to another level. Clinton was out there with the crowds; he played, and he was greeting everybody. It really surprised me how much presence he had.”

According to Foster, Humana came to the desert with a verve and veracity that indicated it would be more than a sponsor in name alone.

“Humana was so different from our previous sponsor, Chrysler,” he says. “Humana was out before the tournament — early and often, with four or five people working in the community. They wanted to meet the city of La Quinta with related events before the tournament. They went out and organized their crews. Humana is very, very committed to the charitable aspect, and they’re very committed to their message of improved health. They’re very serious about it. They put their money where their mouth is.”

Despite a slim time frame to orchestrate their first year in the desert, Humana and Clinton quickly translated their conceptual impact into a tangible vibe throughout the Coachella Valley.

“There was a real spark of optimism, to say the least,” Foster says. “I think that people in the community and players on tour knew the tournament was having some hard times without a sponsor. There was a spirit out there that was very lively and very positive. Maybe it’s because I was very close to it that I certainly felt it. But I think everybody in the community had an uplifted spirit because of it.”

Desert Classic Charities donated a record amount of nearly $2.1 million raised by the 2012 tournament. Along with assisting in building the KaBOOM! playground in Thermal and donating $1 million to Eisenhower Medical Center, the philanthropy extended to 39 community causes, distributed across the following categories:

• $500,000 to the Well Being Grant for Boys & Girls Club of the Coachella Valley, Family YMCA of the Desert, and KaBoom!

Since 1960, the tournament has donated more than $50 million to nearly 200 Coachella Valley causes.

Going to a four-day, three-course format, the 2012 Humana Challenge brought the Coachella Valley its strongest playing field in years. Along with a rare appearance by World Golf Hall of Famer Greg Norman, the tournament saw two-time winner and fellow Hall of Famer Phil Mickelson return to the desert for the first time since 2007.

In addition, the event featured eventual FedEx Cup winner Brandt Snedeker, who, along with Mickelson, combined with four other Humana participants to represent half of the American contingent in the 2012 Ryder Cup. Changes to the tournament’s pro-am structure altered the professional’s longstanding aversion to marathon rounds.

“The change in format was critical,” says PGA West’s Jerry Eye. “With two amateurs paired with two professionals and playing foursomes instead of fivesomes, it allowed the amateurs to play with six pros instead of three. It also provided a better environment for the pros themselves. They weren’t waiting as much as 45 minutes before making the turn to the back nine.”

A spike of attendees, together with media in a tent that doubled in size from the previous year, watched a Humana field that offered a host of the game’s future faces.

“I was at the Ryder Cup in September, and it was wonderful to see guys that, basically 12 months ago, could walk through our clubhouse and maybe people wouldn’t even know,” says Todd Keefer, general manager of The Club at PGA West. “I mean, Jason Dufner walked through our clubhouse all day long and nobody really knew who he was. And that probably won’t happen anymore.”