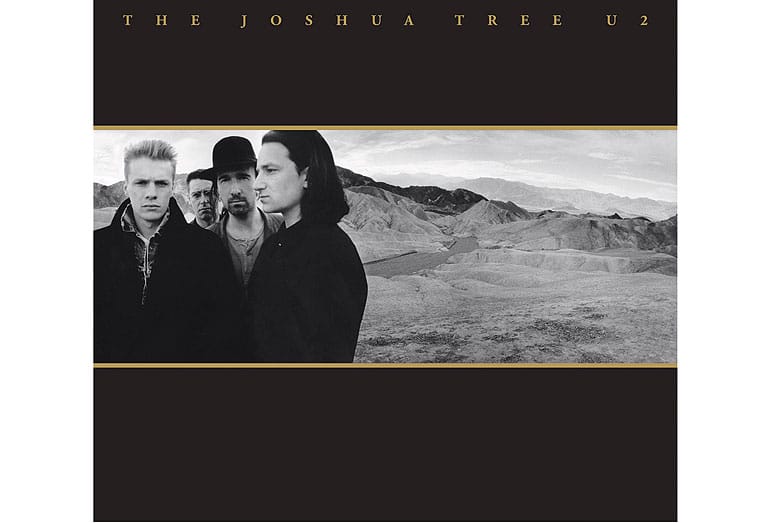 After choosing to photograph their alum cover in Joshua Tree National Park in 1987, U2 decided to change the name of their 1987 release from The Two Americas to The Joshua Tree.
Photo courtesy of Universal Music Group

When the Irish band U2 began work on its fifth album in 1986, its members had one destination in mind to capture the accompanying visual: the American West as personified by the Coachella Valley. “We wanted to find places where nature and civilization met. The whole idea, the theme, was desert and ghost towns,” says cover designer and art director Steve Averill about the iconic shoot that begat the indelible images used for the band’s multiplatinum 1987 watershed album, The Joshua Tree.

That wasn’t always the name of the record, though. “It originally had the working title The Two Americas,” Averill reveals. “The title came up during the journey, an idea Anton [Corbijn, the photographer] had to go to Joshua Tree National Park. The biblical side of it all, and being in America, resonated with Bono and everybody else in the band, so that became the title.”

The black-and-white wide-screen cover shot of the band in the foreground with majestic valley terrain behind them was — and still is — quite a stark image to behold. “What I was trying to do with the way we shot the pictures and framed the cover was to suggest the landscape vision and cinematic approach that was taken to the recording,” explains Averill. “My intention was to give a Sergio Leone/John Ford kind of feel to it by using a shot where the band was off to the left as opposed to being in the center.”

The cover was actually shot at Zabriskie Point, says Averill: “We were up high where the telescopes are, and we walked into the dry bed where the rainfall goes. That landscape is weird, you know? It’s kind of lunar. The American landscape is quite different from where we had been shooting in Ireland, that’s for sure. That whole area, the valley, was fairly incredible. It made you realize the size and scope of America.”

The Joshua tree itself appears to the right of the band on the back cover and also directly between them in the middle of the inside gatefold shot. Averill, Corbijn, and U2 collectively felt the cover photo of just the band and the landscape was more appropriate for where the music was going. And, sorry to be the bearer of bad news, but the fabled tree is no longer with us. “The tree has fallen down since we were there, yes,” confirms Averill. “I saw a shot of it online — it actually keeled over and died. Sad, but there you go. It was an iconic tree in itself, but it didn’t even know that it was.” And now it’s become one with the good earth of all God’s country.