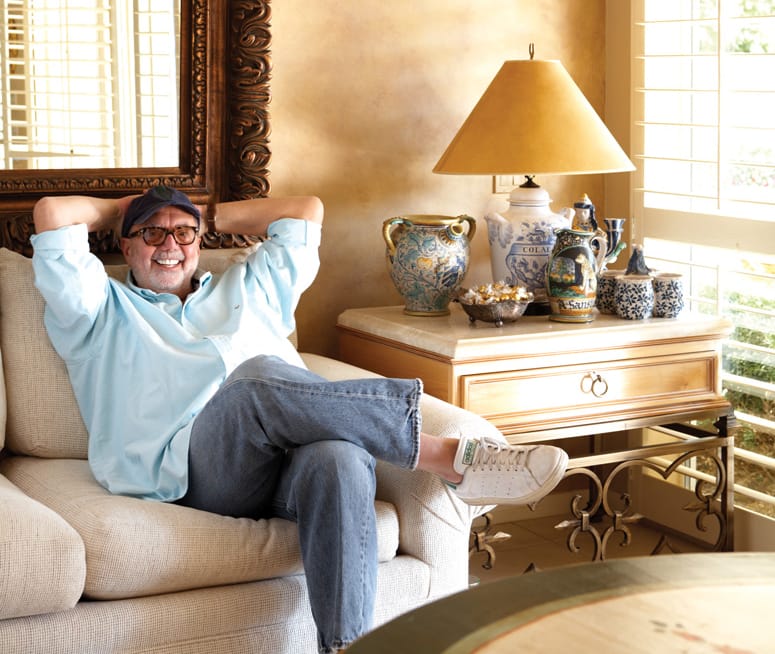 Legendary film and television director Jim Frawley says the secret to The Monkees’ great success was free-form improvisational jazz. When one thinks of The Monkees, jazz chops do not come to mind. Mike Nesmith’s mutton chop sideburns, maybe. But jazz?

“It was the most permissive environment,” says Frawley, who won an Emmy for his direction of the first episode of The Monkees, one of 32 he directed. “No rules, so your mind’s open to everything. Back then I had the producers behind me, saying, ‘Go baby go.’ It was like jazz.”

Frawley, who says “Go baby go” with great zeal, turned 77 in September. He has lived in Indian Wells for the past four years, after two decades as a regular visitor to the Palm Springs area.

“My wife Cynthia and I have always loved it here,” he says. “There is no other place we want to be. To wake up and see the dawn coming over the mountains; and at night, to see the moon and the stars — this is the place.”

Frawley directed dozens of television shows and movies (Columbo, Smallville, and Private Practice, to name a few) in a five-decade career that also includes acting and producing. “The Monkees was my first directing job,” Frawley says of the series premiere that aired Sept. 12, 1966, and captured the 1967 Emmy for Outstanding Directing for a Comedy Series. “I didn’t know anything about directing, really. So we would just improvise. I was so cocky, and I had the producers behind me. Such a free reign!”

Immensely proud of his work on The Monkees, Frawley credits his producers with freeing him to be as wild and free as the madcap scripts and the Frawley-inspired improv that defined the show. Frawley and the made-for-TV prefab four once famously took their jazz to the beach to shoot some of the most memorable moments of the show’s opening. Everyone remembers the enduring image of The Monkees walking in sync on the sand, arm in arm. That was one of many moments and moods Frawley conjured on the spot. Spontaneous delirium. Four parts Monkees, one part Frawley.

“We would just improvise,” he says. “I would tell them, ‘Slide down the sand … now act like a bear.’ Then we would go and form it into something.”

A Houston native, Frawley worked for many years as a young actor in New York. The Monkees early producers Bert Schneider and Bob Rafelson had seen Frawley onstage, and were so impressed that they asked him to make his directorial debut with the fledgling show. Frawley — who had worked in New York with the legendary Sir Laurence Olivier and stalwarts like George Segal and Buck Henry — suddenly found himself in Los Angeles, working alongside Peter Tork. He says Tork, Nesmith, Davy Jones, and Micky Dolenz responded quickly and joyously to his teaching methods.

“The producers asked me to get together with the Monkees, and we did theater games and got to know each other’s rhythm,” Frawley says. “All that improvisation was what made them feel secure enough to do those things in front of the camera. So when we were on the beach, and I said you can do a funny walk, they trusted me.”

“Producer David Kelly was, likewise, very permissive when I directed his show,” Frawley says. “He also was ‘Go baby go,’ and he made it very enjoyable.”

Frawley said he retired when the executives and their rules began to infringe on his world, when the corporate boardrooms replaced the beaches upon which Monkees and their free-spirited director once roamed free.

“Yes, part of the reason I retired was there was far less joy and permissiveness in the last 10 years I worked,” he says. “The restrictions, so many restrictions, made it very difficult. You begin as a filmmaker, and then in the eyes of some producers you become just a functionary.”

Frawley, a visionary, left long before he could ever be remembered as a “functionary.” “I was lucky to have many great years of great work allowing me to be who I am, to express myself,” he beams.

Frawley’s journey of self-expression, and self-knowledge, is a lifelong pursuit. He is a lifetime admirer and student of the teachings of spiritual teacher/guru/author Ram Dass.

“It did start for me in the 1960s when I imbibed in some spiritual medicine and, shall we say, opened my mind to possibilities,” Frawley says of his early awareness of the teachings of Ram Dass. The inimitable Ram Dass first opened minds when he was known as Dr. Richard Alpert, and teamed with fellow Harvard outlaw genius
Dr. Timothy Leary.

Frawley says he finds his deepest peace when he takes long walks near his home. Something about this desert resonates with Frawley, who says his lifetime of spiritual seeking parallels that of Carlos Castaneda’s Don Juan.

“Look, I am by no means saying I am some sort of a holy man,” Frawley says, laughing. “There is a part of me that always uses that part of my mind — to go inside, for knowledge and strength and wisdom and peace. And the desert is the perfect place for that. I am not the first person who has come to the desert for that. Don Juan comes to mind … you remember him?”

As you follow Frawley’s sharp mind along its wondrously free-form, synaptic path — from Monkeeing around on the beach to traveling to deep inner space with Ram Dass and Castenada — you realize why the man became a director revered for his improvisational style.

Frawley pauses to consider if all his work, all his choices, share a common creative thread.

“I would say what ties them all together is they all have an askew point of view,” Frawley says. “Askew? Askance? (It is askew; askance means something different … survey says …). All are quirky; all have humor. Look at my work in TV; if you go from The Monkees to Ally McBeal, you see they both have groundbreaking material with a really quirky viewpoint.

“That said, I am by no means a ‘genre’ director. I’ve done comedies, I’ve done Westerns.”

One of the films for which Frawley is most proud is the obscure Western Kid Blue, starring Dennis Hopper and featuring Peter Boyle. He says Kid Blue and The Muppet Movie are the films that most exhibit his artistic expression. He recently screened and discussed Kid Blue at Rancho Mirage Public Library.

“We had 500 people,” he says of the event. “It was a film I made in the ’70s, and I was very happy when I made it. But at that time the studio did not promote the film. [Studio executive] didn’t like that Dennis Hopper had a beard, and was a radical. So for a long time I felt like [the film] was overlooked.”

Frawley appreciated the response the film garnered in Rancho Mirage.

“It got an amazing reaction from the crowd here,” he says. “At the end, Hopper escapes in a plane, and when it ended this audience of people who live out here in the desert, they all broke into spontaneous applause. They loved it. And hearing all that applause, it kind of renewed me. I was kind of reborn in my eyes.”

The audience reaction came as a surprise to Frawley.

“But,” he says, “there is something about this desert that is just always full of surprises. This place never stops surprising me — its beauty, and everything is very mellow here. And most of the time, living here in the desert, I am anonymous.”

Not too anonymous. Frawley remains busy and hardly feels retired.

“I am retired,” he says, “but I do screen my films at the library. Next year we are going to be screening The Muppet Movie. And I am always busy at the Desert Film Society. So I feel very alive and very active and a big part of the Indian Wells community.”