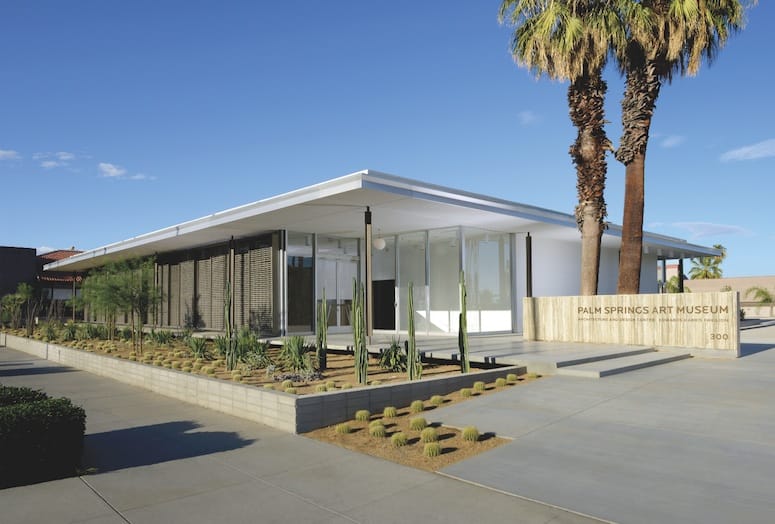 Today, the city touts Modernism Week as one of its signature events, stretching over 11 days (Feb. 12–22, 2015) and drawing tens of thousands of architecture and design buffs from around the globe. The program packs more than 180 events showcasing midcentury modern architecture, art, design, fashion, and culture and will generate about $17 million for area hotels, shops, and restaurants.

Many popular programs — home tours (bike and double-decker bus), garden tours, lectures, films, music, and a vintage travel trailer exhibition — return with some new ones in the next edition of Modernism Week. For the first time, the festival will have a central hub for attendees to gather. The 15,000-square-foot C.A.M.P. (Community and Meeting Place) will be a courtyard surrounded by joined tents and will serve as Modernism Week headquarters. Visitors can enjoy a variety of talks, films, and sustainable technology displays. A variety of live entertainment, including bands and DJs, will keep the place lively all week.

Designer Todd Oldham, known for his lighthearted approach to fashion and style, will speak from 4 to 6 p.m. Feb. 14. He designed The Hotel in South Beach in 1999 and is now adding an annex to his original design. Oldham’s television appearances (most notably in “Todd Time” segments on MTV’s House of Style in the 1990s, Fashionably Loud on MTV in 1999, and as a mentor to contestants on Bravo’s Top Design) propelled the charming and witty designer. During Modernism Week, he’ll tell the audience at a sold-out auditorium about his distinctive views on the importance of design.

Modernism Week has also joined forces with Goldenvoice, known for the Coachella Valley Music and Arts Festival (a.k.a. “Coachella”) and the Splash House pool parties. The partnership provides the event with more corporate sponsorships (including American Express), national and international marketing campaigns, event logistics, and production of special events.

Check the schedule and buy your tickets early; the events sell out quickly. Visit www.modernismweek.com for more information.

MODERNISM BY THE NUMBERS

• $17 million in economic impact to the Coachella Valley

• 84 percent attendees who came from outside the Coachella Valley

• 93 percent attendees who dined out during Modernism Week