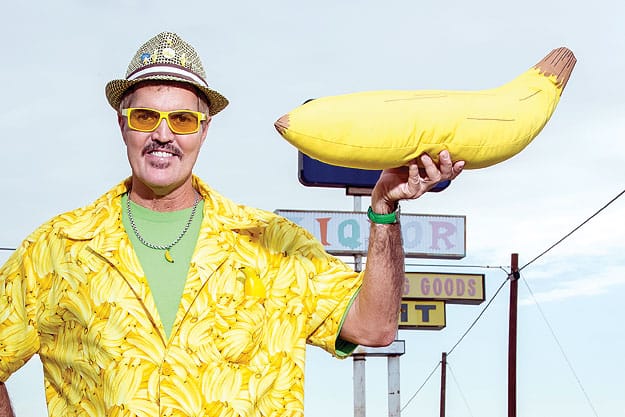 The aroma of banana nut bread (from a scented candle) strikes your olfactory senses in the bright yellow and green drenched room. Walls, cases, and shelves are so full that your eyes fail to focus on one thing, even though a 7-foot banana with a monkey on it commands a center floor space. Amid enough bananas and monkeys to rival the Amazon, Big Banana Mon unwraps his latest treasure: a frosted glass banana made in Italy.

“I go on eBay every day,” says Fred Garbutt, owner of the International Banana Museum opening Nov. 3 in North Shore. Living up to his self-given moniker of Big Banana Mon, Garbutt sports yellow shorts and socks, a banana-face watch, a small plastic banana on a chain around his neck, and a banana museum T-shirt under a tropical-style shirt made from banana-print fabric he purchased on eBay.

Garbutt’s family has owned a building about 17 miles south of Coachella near the Salton Sea shoreline since 1959. One side houses their Skip’s liquor store (which also sells bait, ice, and convenience-store items); the other side — now the International Banana Museum — previously was leased as a pub.

On a fateful day in April 2010, Garbutt was at his mother’s house when she summoned him to her computer to show him a collection for sale on eBay. Ken Bannister had collected 17,000 bits of bananarama, created the International Banana Museum in Altadena, moved the museum to Hesperia, and now had the collection stored in his garage.

With 90 minutes left in the eBay auction, there were no bidders. Thinking a banana museum would help attract business to Skip’s, Virginia Garbutt suggested they buy Bannister’s collection. Spotting his phone number in one of the photographs, Garbutt called the collector and offered less than the $7,500 asking price.

“He said he had other people interested and I said, ‘Sure you do.’” Garbutt recalls. “Three days later, he called and said he’d accept my offer on the condition I never reveal the price I paid.”

Garbutt, who has taken to speaking in puns (it’s hard not to when you’re surrounded by bananas and monkeys), has since added about 1,500 items to the collection.

“When my wife [Kym] and I go shopping, we always have our eyes ‘peeled’ for banana stuff,” Garbutt says. Although Kym, has “a good eye for banana things,” he adds, that’s the extent of her involvement in the museum. On the other hand, Virginia Garbutt (Banana Nana) “just absolutely adores coming here and getting banana stuff.”

Kitsch as Kitsch Can

“Ken’s collection was great filler, but I still thought it was lacking finer things,” Garbutt says. “The best thing in his collection was this monkey bowl [ceramic bananas in the shape of a bowl with a monkey on the rim]. I saw one like it on El Paseo [Palm Desert’s luxury shopping boulevard], so I know it has to be expensive. The other good piece is a banana lamp. I have never seen another one like it.”

Garbutt also purchased a 500-item collection of banana kitsch from a man in Mississippi. Among his most coveted additions is an animation cel from a 1960s Chiquita bananas commercial he bought on eBay for $45. “I couldn’t believe nobody was bidding on it,” he says.

“It’s an international museum, so I try to get things from all over the world. I have things from Trinidad, Denmark, and Russia.”

Garbutt — who lives in La Quinta and builds tennis courts in the Coachella Valley through his company, Aces Court Construction — revamped the former pub himself, installed and filled display cases, hung things on the walls (including a banana storage thermometer), and even covered the ceiling beams with banana-themed images.

“I have a printer; I have Internet,” he says. “I found banana pictures on the Internet and went to the dollar store and bought a bunch of frames. It really adds a lot of pizzazz.”

In addition to the large banana statue he bought in part to provide a photo-op for visitors, Garbutt found a source for banana plant and monkey bar stools made in the Philippines.

He also has been stocking items to sell in the museum. Souvenirs include banana-themed key chains, magnets, jewelry, pens, and finger puppets (from Peru); banana-scented candles and hand sanitizer; and plush bananas and monkeys. Garbutt also has had T-shirts printed (“I went bananas at the International Banana Museum”). And everyone who comes in gets a scratch-and-sniff banana sticker to wear.

Some people may think Garbutt is “bananas” himself. That was his initial impression of Bannister. But he quickly changed his mind when he was unloading the U-Haul trailer after picking up the collection.

“I was carrying a box in when I got a call from AOL wanting to talk to the person who had bought the collection,” he recalls. Media attention has continued — even internationally (this summer, Garbutt fielded inquiries from the BBC and media in Brazil). On this day, his yellow-cased smart phone rings with a call from The Learning Channel.

“They want me to be on their extreme collectors show, but I told them I didn’t know if I fit their criteria,” Garbutt says.

Yes, because the show is My Crazy Obsession, and Garbutt denies he is “obsessed” with bananas. He’s immersed himself in banana culture and will admit he eats more bananas than he used to, but the museum (as fun as it is) simultaneously serves as a serious endeavor to bring attention to his family business and even to the Salton Sea. Garbutt even plans to reach out to Jeep tour operators to offer the museum as a destination.

“The Salton Sea always gets such a bad name; people have been discouraged from going,” he notes. “With my stop here and Oasis Date Gardens [in Thermal], the Fountain of Youth [Spa Resort RV Park in Niland], the Salton Sea State Park, and Albert Frey’s restored yacht club [also in North Shore], they could see a beautiful view of the Salton Sea and that there’s a lot out here to offer.”

Garbutt, in fact, plans to create a sculpture garden with a fountain and tables in the rear of the museum where people can relax and enjoy a view of the sea.

He also wants a Guinness World Records official to visit. Bannister achieved recognition in Guinness’ 50th anniversary book (2005) for owning the largest collection devoted to one fruit. “I would like to have them come out and do a recount so I could be in one of the editions,” Garbutt says.

He has kept Bannister informed of progress on the museum and sent him pictures.

“Even though he said he was done with the banana thing for the most part, I think it’s in his heart,” Garbutt says. “I think he misses his collection.

“Ironically,” he adds, “he now lives in Apple Valley.”

Fred Garbutt has set the opening date of the International Banana Museum for Nov. 3. In the meantime, he will drive out to meet people who post a request to visit on the museum’s Facebook page (www.facebook.com/InternationalBananaMuseum) or e-mail ibmbigbanana@aol.com. “I always have something to do here,” he says. The museum’s regular hours will be 10 a.m.-4 p.m. Friday through Monday, with a token admission fee.

The address is 98775 Highway 111, North Shore (enter “Mecca” if you’re mapping it on Google, because North Shore has no a post office).

You’ll pick up the distinct aroma of bananas when you first enter the museum, but in time you probably won’t even notice it. As Garbutt puts it, “You’ve been bananified.”

Although gnomes have been a popular traveling companion for photo ops, Fred Garbutt has ventured forth with a more unusual mascot. Platty (from plátano, the Spanish word for banana) is a squeaky toy banana on which Garbutt glued eyes.

“Here he is on the Canary Islands, in Casablanca, in front of the Rock of Gibraltar, and in Miami Beach,” he says, showing images of the peripatetic Platty. The pictures are a hit on the museum’s Facebook page.

Garbutt is working on another element of bananaism on the move: tricking out his car for parades as the Banana Museum Wagon. Appropriately, he drives a BMW.

See the video below for an up-close look at Garbutt's dream.