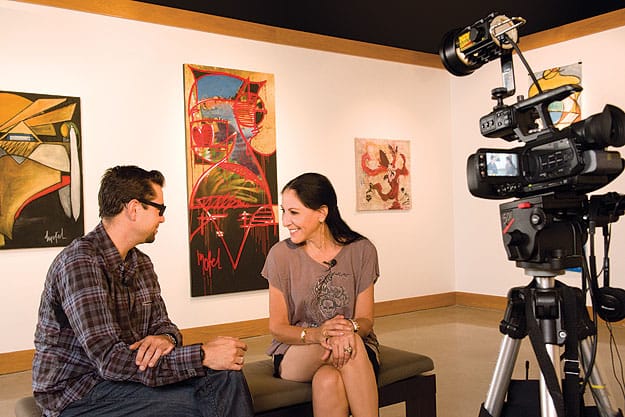 Ryan Campbell is among the artists Angela Romeo has interviewed for her Colliding Worlds series.
TAYLOR SHERRILL

Angela Romeo of Palm Springs wanted to be an artist but, on her father’s advice, pursued a more secure career in law. Now married to a lawyer (Mark Romeo) she met when he was opposing counsel, she has re-engaged her passion: designing jewelry and bringing attention to other artists.

Since November 2011, Romeo and videographer/editor Steve Tanguy have filmed interviews with almost 100 artists in the Coachella Valley and other Southern California cities, San Francisco, and Arizona. She posts the 30-minute documentaries every two weeks on Vimeo and YouTube. KPSE My13 TV airs them on Saturdays at noon.

“People think the everyday world and the art world are separate,” Romeo says, explaining the show’s title, Colliding Worlds. “You can never go a day without art hitting you in some way, shape, or form.”

Romeo selects her interview subjects based on their personalities and work rather than on their recognition by curators. “Some are in galleries. Some are between shows. Some don’t have any representation at all,” she says. “But you should know them. That’s what’s important about [Colliding Worlds].”

Based on web statistics and feedback, the audience is largely West Coast based. “We’ve picked up viewers in Australia, Europe, Japan, and the Middle East,” Romeo says. “Linking with artists [online] has been key to getting us out there.”

Romeo prepares for interviews by researching artists and their work, but admits unexpected moments have arisen during taping. “We’ve had a few artists [who] got emotional,” she says. “We manage to hit some raw nerve, and they get teary eyes. But we rarely finish an interview and not have them say, ‘No one has bothered to ask me that before.’”