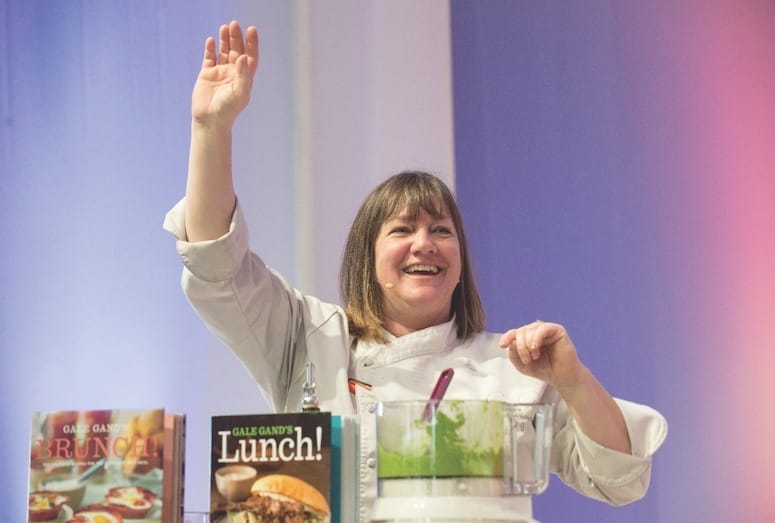 Tasters, sippers, and note-takers from around the country converged in March at the fifth annual Food+Wine Festival Palm Desert, presented by the Agua Caliente Casino Resort Spa — many attending all three days, indulging full-force in one of the most popular culinary events in Southern California. With lanyards for their wine glasses hanging around their necks, smartly dressed guests balanced their plates as they sampled from among the more than 80 wines and Champagnes and about a dozen craft beers, along with tequilas, rums, and other spirits — and from more than 50 of the desert’s top restaurants and culinary brands, which served up delicacies ranging from steak to pot stickers to tart limoncello. VIP ticketholders entered the Big White Tent early to indulge in exclusive Champagne, caviar, and chocolate tastings, as well as special wine seminars. Gand’s demonstrations showed how simple it is to make the dessert she prepared for the James Beard luncheon — passion fruit soup with pistachio meringue sticks. “Cooking should give you joy and be fun,” she said during the event. “I want to make it easy, and I think that just about anything in life — even world peace — can be made better with good food.”

The festival offers a wonderful opportunity to sample a cross-section of delights.

Cora, whose favorite ingredient is citrus, showed how to whip up one of her “go-to” sauces for seafood and salad, blending roasted red peppers and tomatoes, sliced almonds, lemon juice, sherry vinegar, garlic, and olive oil. “Grill or flash-sauté salmon and scallop skewers, throw in a handful of greens, and finish with the sauce,” Cora shared with luncheon guests. “Quick and delicious.” Colin and Ingrid Bolton — festival attendees from Calgary, Alberta — were taking notes. “She’s practical,” Colin said. “She has things that are easy to make and healthy. I’m definitely going to try this." In the Ferguson Grand Tastings tent, Ari Taymor — whose eatery Alma was named Best New Restaurant in America 2013 by Bon Appétit — cooked Alma’s “signature snack,” a light English muffin topped with uni, burrata, caviar, and licorice herbs. Despite his restaurant’s impressive accolade, Taymor said he has no interest in being a celebrity: “I’m here because Palm Springs is really beautiful, and I want to be with the people and feel their energy.”

More than two dozen chefs served from 1,000 to 1,500 people over two days with their on-the-spot creations. Bruno Lopez of The Ritz-Carlton, Rancho Mirage made a tossed Cobb salad “the way Nancy Reagan liked it, with everything chopped finely and tossed without Roquefort cheese.”

Engin Onural of The Venue Sushi Bar & Sake Lounge on El Paseo showed how to make the Venue Roll, using a blowtorch to sear the salmon. Drew Davis of Catalan Mediterranean restaurant in Rancho Mirage brought out his huge paella pan to demonstrate Catalan Fideuà.

Festivalgoers queued for a taste of the limoncello from Cello’s Bistro in Cathedral City. Andrew Copley of Copley’s on Palm Canyon prepared Asian-style clam chowder, and Patrice Martineau of Citron at the former Viceroy Palm Springs served up Peruvian Hamachi ceviche. More than two dozen chefs served from 1,000 to 1,500 people over two days with their on-the-spot creations.

A standout among the wine seminars was “The Art of Wine Blending (Deconstructing Isosceles)” with Justin Baldwin of Justin Winery. Participants were fortunate to sample “hidden gems” from Australian wineries located in regions such as Tasmania, Barossa Valley, and Coonawarra.

Baldwin, who planted his first vineyard in Paso Robles in 1981, now harvests from four separate vineyards, each producing distinct grapes that go into Justin’s award-winning Bordeaux-style reds. He said he trademarked the name Isosceles to indicate that the resulting wine is a three-sided blend, with each year being different according to that year’s grape harvest. “I’m not a math whiz — far from it — but I do like the idea of balancing the grapes to bring out the best of each vintage. It is a never-ending challenge,” he said. With lanyards for their wine glasses hanging around their necks, smartly dressed guests balanced their plates as they sampled from among the more than 80 wines and Champagnes and about a dozen craft beers, along with tequilas, rums, and other spirits.

Other wine seminars were hosted by Moët Hennessy, Summerland Winery, Whole Foods Market, and Purple Corduroy, while Thomas Steferak of Cello’s Bistro explained the secrets of making limoncello from lemons grown in the Coachella Valley. The lemon liqueur, often called Italy’s national drink, is traditionally served chilled as a palate cleanser between courses or as an after-dinner drink and is also used to flavor Cello’s signature tiramisu.

Visit www.palmdesertfoodandwine.com for more information about the event.