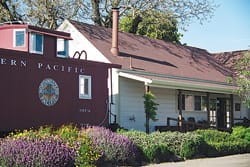 More than 100 years ago, petite sirah was first planted in the Healdsburg area of California and was the initial wine to be made by Foppiano Vineyards. Foppiano today is considered to be one of the finest petite sirah producers in the United States.

Foppiano Vineyards began winemaking in the 1860s, when Giovanni Foppiano bought Riverside Farm. He had emi-grated from Genoa, Italy, to make his fortune in gold. When the hunt for gold did not pan out, he turned to winemaking. His son, Louis, joined him; and together they sold their wine to Italian families in the area and in the North Beach (Italian) neighborhood of San Francisco. After a dispute with his father in 1910, Louis bought the winery.

For the next eight years, Foppiano Vineyards became the most prosperous winery in the Healdsburg area, due primarily to its production of petite sirah. Then, in 1919, came Prohibition. Louis kept the vineyard in business by planting prunes, apples, and pears as an adjunct to grapes. Grape production was still viable, however, because individuals were granted an annual allotment of 200 gallons of homemade wine for personal consumption. Foppiano also began shipping large quantities of grapes to the eastern part of the country.

In 1924, Louis A. died, leaving the winery and vineyards to his son, Louis J. Federal agents discovered that a considerable portion of Foppiano’s wine was being sold to San Francisco restaurants. The winery became the most popular watering spot the day the Feds opened the taps on 100,000 gallons of petite sirah and the rest of the Foppiano wine inventory. As the creek ran red, locals brought containers to scoop up the residue.

Louis’ ingenuity in dealing with Prohibition allowed the winery to resume full-scale production when Prohibition ended. Most other wineries had either let equipment fall into disrepair or lost everything due to insolvency. After creating new distribution in the East, Louis built a more modern winery on the site of the old one, and Foppiano became one of the first wineries to bottle its own production.

With the start of the World War II, European imports to the United States halted. The lack of wine coming from France and Italy was a boon to West Coast wineries. Foppiano began shipping six rail cars of wine a week to Eastern cities in 1941 and increased production to 800,000 gallons a year.

Other vineyard owners saw the opportu-nity created by Foppiano’s ingenuity. This resulted in major grape plantings and many new wineries in California’s Central Valley. Foppiano’s jug wines could not compete in price with Central Valley wineries, which were getting higher yields from their soil and climate conditions.

The resulting competition forced Foppiano to deviate from the low-price wine market. They began making premium wines in 750ml bottles. Through adversity came renewed success, as they began winning medals at competitions nationwide.

With the Foppiano transition to premium wines, the family hired winemaker Bill Regan, who has handcrafted most of their production for the last 25 years.

The fourth generation of the family is now in charge of the winery, and Louis M. is the head man, with his sister Susan in charge of hospitality and the tasting room. Under their direction, Bill has maintained the historic quality of the flagship petite sirah.

If you cannot find Foppiano wines at your store, e-mail us at jd@innkeepercard.com and we will help you locate them.