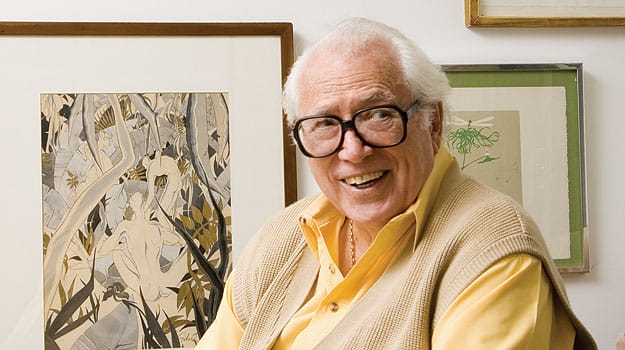 Paul Gregory takes great pleasure in surrounding himself with art. “I love everything I have,” he says, lamenting the trend of buying strictly for investment.
Mark Davidson

So reads a sign in the drawing featuring the legendary Charles Laughton that graced a 1951 cover of Time. Gregory is Paul Gregory, whose claims to fame include producing Night of the Hunter, the only movie Laughton ever directed. Ahead of its time in many ways, the 1955 film has been recognized as a model by the likes of Spike Lee and Steven Spielberg and now garners Gregory invitations from film festivals around the world, including Germany, Brazil, Italy, and China. But the Desert Hot Springs resident won’t go.

“They’re too late,” says the 85-year-old Gregory, who lost $240,000 on the film that the New York Times, Los Angeles Times, and industry noteworthies called one of the 10 best pictures of 1955; made the American Film Institute’s list of the 100 Greatest Thrillers; was selected for inclusion in the National Film Registry at the Library of Congress; and a few years ago was honored at the Cannes Film Festival. Louella Parsons called it “the most completely different horror movie I have ever seen.”

Gregory could have pursued United Artists, which made $2.5 million on the film, but he couldn’t be bothered. “I did all right with The Naked the Dead [his 1958 film based on a Norman Mailer book] and forgot it.” That’s not to say he forgot what went wrong.

“What really hurt the film was United Artists had another film, Not As a Stranger, starring Robert Mitchum [who also starred in Night of the Hunter with Shelley Winters and Lillian Gish] and Frank Sinatra. They sloughed off our film,” Gregory says. He isn’t sure how his film later became a cult classic, but surmises that it was “because it was honest. … There was truth in the soul of that film.”

What he did know when he read the script was that Laughton would love it. He knew that because he had spent months on the road with Laughton on a reading tour of nothing less than the Bible.

Gregory’s story begins in 1938, when he left Des Moines, Iowa, with $15 in his pocket and got a job at a Hollywood Boulevard pharmacy in a building housing the Screen Actors Guild. One day, Ruth St. Denis came into the store. Gregory recognized the famous dancer and struck up a conversation. During a subsequent visit during which she mentioned she would like to do one more show (at the age of 81), an inexperienced-but-confident Gregory offered, “I would like to present it.” He rented a theater for $200 and brought in enough advertising to pay for two nights of the show. Splitting the proceeds with a partner in the project, he went from being a drugstore worker with $800 in the bank to a drugstore worker with $6,000 in the bank.

The next customer to tap Gregory’s production talent was the director of the Hollywood Cathedral Choir, which toured with actor Dennis Morgan. After successfully booking shows for the choir and Morgan, he was offered a job as a New York agent for MCA (Morgan’s management agency).

Then one night, Gregory was supposed to meet St. Denis at a restaurant. Her plane was delayed, and he found himself waiting in the restaurant’s bar. On the television, he noticed Laughton reading from the Book of Daniel.

“The idea struck me that I could book him all over the country,” Gregory recalls. “I knew he was broadcasting from The Ed Sullivan Show.” Gregory promptly left the restaurant. “By the time I got there, he was leaving the theater. I approached him and said I wanted to book him, and he said, ‘Talk to my agent.’ I asked him, ‘Are you turning down a million dollars, Mr. Laughton? I need to talk to you.’ … We went to his hotel room, and I left at 3 a.m. with a contract on the hotel stationery.”

How Gregory knew he could make money with a reading tour of the Bible (he later learned that Laughton didn’t even believe the Holy Scripture) hinged on instinct and “the silence in the restaurant when he was reading that book,” Gregory says. “He transformed you completely with his talent. … I never saw him on stage when he wasn’t mesmerizing.”

Unfortunately, Laughton’s dramatic flair and “difficult” personality came in part out of his pervasive sadness, based on self-hatred over his appearance. “If Charles never had to look in the mirror, he would have been an angel,” Gregory says. However, he adds, Laughton “never threw a fit in front of me that he didn’t afterward apologize for.”

As related in Preston Neal Jones’ book, Heaven and Hell to Play With: The Filming of Night of the Hunter, Gregory and Laughton were to partner on The Naked and the Dead. But financial backers wouldn’t support Laughton directing it, and Gregory had to move on with the project he owned. “It grossed millions and millions, and it was a lousy picture,” he says in the book.

Aside from United Artists’ abandonment of his earlier film, Gregory has but one regret.

“I wanted [Laurence] Olivier for the minister [Mitchum’s role], and he was dying to do it. But we would have had to wait two years for him. I thought Mitchum was good, but he was obvious. …To have [Olivier] be an evil man would have been more exciting.”

PEACE IN THE VALLEY

Paul Gregory remembers when Desert Hot Springs was little more than Coffey’s Spa, a gas station, a small hotel, a hardware store, and a grocery store with a phone booth out front.

“That’s where we got our phone calls,” he says, referring to himself and his late wife, actress Janet Gaynor. They would write their friends telling them when to phone. “Then we would park there and wait for the call to come.”

Those were the early days of the couple’s residence at Singing Trees Ranch. “It was like a Valentine with lattice arches,” Gregory recalls. “We put in a pool with our own natural hot water.” But installing electricity, plumbing, and the pool weren’t enough to satisfy Gregory.

“I wanted to make the ranch pay,” he says. “I had been in France, in Marseilles, and seen pigeons called Mondaine squabs.” In 1960 or ’61, he and Gaynor ordered 250 pair and built the flock up to 5,000 pair. They hired people to take the squabs into town and shipped them all over the world.

“I didn’t go into the pigeon business to shovel pigeon manure,” Gregory says. “It was an exciting business.”

To understand why he found raising squabs in Desert Hot Springs exciting after a career in the entertainment industry, you need to look at his attitude about acting, which formed quickly after an agent took him to meet a casting director at MGM. The director liked the young man testing for the part of Gregory Peck’s brother, but didn’t think his name — Jason Burton Lenhart — worked for a movie actor. “How does the name sound to you,” he suggested, “Gregory Peck … Paul Gregory?” The film never materialized, and Gregory only acted in a couple of shorts.

“I knew I didn’t want to be an actor [after that],” he says. “I thought there was something kind of sick about sitting around. … The ego thing absolutely overwhelmed me. It’s something I did not want to be a part of. It’s a wonder I stayed in any aspect of the business, to tell you the truth.”

Despite those sentiments, Gregory became friends with celebrities — most notably Janet Gaynor, to whom he was married from 1964 until her death in 1984. When the couple moved to Desert Hot Springs, Gregory — who earned Escoffier certification from famed chef Paul Bocuse in Lyon, France — fed guests such as David Selznick, Jennifer Jones, Greta Garbo, Katherine Hepburn, Truman Capote, and Tennessee Williams. “I often cooked for 20 people a weekend,” he says.

Gregory’s circle of famous friends exceeded Tinseltown’s personalities. He made numerous acquaintances overseas, including Laurence Olivier, John Geilgud, John Mills, Charles Boyer, Jean Cocteau, and Gertrude Stein. While having coffee with Charles Laughton and his wife, Elsa Lancaster, in France, Pablo Picasso invited them to join him at his table. The artist later invited Gregory and Boyer to his studio, and Gregory has a drawing of a dove that Picasso made in the Bois de Boulogne and then handed him, saying, “This one’s for you, dear boy.”

In his living room sits a red lacquer box he first saw when visiting Katherine Hepburn. As he relates the story, he admired the box and Hepburn responded, “Oh, you like that honey?” Nothing else was said about it. But a month after her death, a UPS truck pulled up in front of Gregory’s house and delivered a package that contained the admired item.

Gregory also has a painting he watched Salvador Dali create. His vast collection of original paintings and lithographs includes works by Jules Cheret, Toulouse Lautrec, Marc Chagall, Joan Miró, Amedeo Modigliani, Giorgio de Chirico, and paintings of flowers by Gaynor. He has numerous paintings of Indians (he’s part Cherokee), sculptures and artifacts from Africa, and gargoyle-looking monkeys found in underwater caves in Egypt. He has a 600-year-old Lotus Blossom Buddha from Cambodia, a 2,000-year-old Buddha from Hong Kong, and a 13th century Della Robia plate he bought in shambles and had glued together by an artist at the Vatican.

Surrounded by art and books, Gregory is content in his Desert Hot Springs home. “Listen how quiet,” he says. “I sit here and marvel and thank God how lucky I am.”